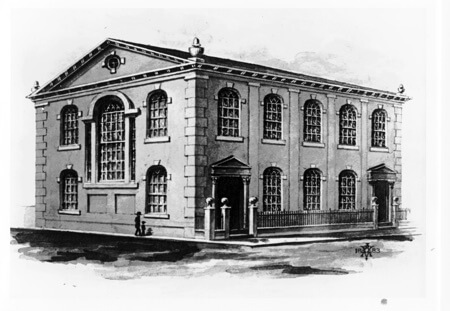 1727 – September 21 Rev. Michael Weiss and 109 men and their families from the Palatinate region of Germany land in Philadelphia.  (1st group to sign oath of allegiance to Crown)   Share worship space with Lutherans in a falling-down butcher shop near 5th & Arch.

1765 – Charter of Incorporation granted by Proprietors Thomas and Richard Penn

1777 – British use church as hospital during occupation of city; Rev. Weyberg preaches to the Hessians and is briefly imprisoned

1917 – Congregation decides to build a new building at 50th & Locust

1934 – OFC becomes a congregation of the Evangelical and Reformed Church

1957 – OFC becomes a congregation of the United Church of Christ

1996 – Congregation resolves to be “Open and Affirming”