We're A Portal We Didn't Even Know About

One of the great parts of being a pastor is getting to talk with people about their lives. These conversations often offer insights into things well beyond my own experience. Recently, I’ve been told about the advantage of living with a prosthesis and how someone became a sex worker. Both conversations were surprising in two different ways: 1) I learned about others’ experiences that I could never even have guessed, and, 2) well, they weren’t exactly the kinds of conversations I expected when I went in to ministry. Two weeks ago, I was speaking to a young couple from church, and they told me about Ingress, an “augmented reality game” created by Google. Players use their smartphones to fight for imaginary control of the real landmarks and the territory between them.

Confused? I was too.

Imagine the old-fashioned board game “Risk,” except now the real world has become the game board. You have to go physically and stand in front of a place you wish to capture — a church, a mural, a statue — and using your smart phone, you can not only claim that landmark, but also connect various others to constitute a territory (or beachhead, if you will).

If that’s not mind-stretching enough, here’s one more fact: 2 million people are playing Ingress in over 200 countries.

The game is built on two premises that won’t sound that foreign to Christians — that our world includes more than meets the eye AND that there’s an essential and life or death struggle occurring between good and evil. The game’s introduction teases, “The world around you is not what it seems. Our future is at stake, and you must choose a side.”

After that, Ingress’ backstory devolves pretty quickly into pure science fiction gibberish: multidimensional “portals” have appeared at points of high spiritual and cultural significance — works of public art, places of worship, libraries, bus and subways stations. These portals emit “exotic” matter, which can be detected and collected using your “scanner” — a smartphone or tablet running the game.

Everyone playing the game is divided into one of two sides:

~ “The Resistance” (blue), which believes the portals represent a dangerous alien threat, (known derisively by the other side as the Smurfs), and

~ “The Enlightened” (green), which believes the portals are an opportunity for humanity to grow and better itself (known to their opponents as the Frogs)

Individuals are literally walking around on foot, looking for churches, public art and other cultural hotspots, and then working their smart phones furiously to capture portals in order for their team to control territory by building networks of connections between them.

And this is all happening all the time, everywhere. It’s happening right now here in Philly. Center City is a vital battleground between the Enlightened and the Resistance. City Hall has probably already changed hands six times today. People actually seek out and walk to Old First, to stand in front of the building because it’s a portal they need or want.

Ultimately, the goal is to cover the greatest amount of human population. But day to day, the territories claimed seem to change with every little skirmish. For a time, one side controlled a massive area that stretched from Providence, RI all the way to Philly. And I read once one team had captured all of Europe. 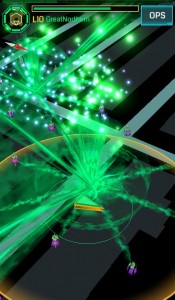 Stripped of all the gibberish, what does this mean?

People playing Ingress are walking around Philadelphia and New York and Vancouver and Reykjavik and Barcelona… to find churches and murals and statues, well-known or unknown. Anywhere with high enough density of people and points of interest, Ingress has people on the go.

One of the players in our church, explained, “It’s not unusual for someone to go on an hour-long tour in an unfamiliar neighborhood, in order to claim cool landmarks so that they can link them up into massive control fields.”

Ingress is not just something to keep you busy on your commute or as you do your errands. Instead, any portal-claiming expedition doubles as a walking tour of a local area, with interesting buildings and monuments highlighted and explained for you. Ingress is engendering pedestrians to explore cities and pay more attention to the sites all around them.

As my young adult friends explained this game to me, I felt this sense of intrigue growing and settling in me. Did this phenomenon have larger implications?

There seems to be agreement that Google is collecting massive amounts of data for its Google apps, particularly about landmarks and turn by turn pedestrian directions.

I read on-line the developer of Ingress suggest that the game is getting people walking so much that it might be able to be marketed as an exercise app.

It is sure that Ingress serves as a sort of gigantic promotion for Google products. It’s on Android phones, uses Google Maps and Streetview, has a video series on Youtube, emails your Gmail account with updates and is largely organized on Google Hangouts and G+. When you’re playing Ingress you’re playing Google, and you’re paying for it by using Google. Welcome to videogames, Silicon Valley style.

But since I’m not actually an Ingress player, I’m more interested in what it suggests for our doing church work. I’ve come up with some preliminary observations. I’ll leave their application to you (or to further discussion later!):

~ There is more going on around us all the time than we are aware of. We may not even be able to fathom some of it. Noticing some aspect of something surprising may still leave us scratching our heads.

~ More and different people then we might expect are willing to suspend disbelief to accept that the world is not what it seems… that there’s more than meets the eye.

~ The struggle between good and evil is still a moving interpretive tool for understanding what happens in our world.

~ Play and playfulness are ways for getting beyond what we can see OR what we often miss. Likewise, play might help us find alternatives to what we normally do and how we think we should act.

~ More people are paying attention to Old First than we think, even showing up at our doorstep. And perhaps for reasons we don’t expect, understand or know. We could be a destination for people we’ve never imagined.

~ People can imagine to some degree church as “a portal” through which something from beyond is coming into and being added to our world.

~A fanciful story can surprisingly easily change people’s habits dramatically, especially if it offers actions through which it can be lived out.

~ And it’s not as hard as we sometimes fear to get people to go out of their way to try new things, visit new places.

~In our technological age, people long for connection and belonging to something bigger than themselves. Ironically, massive group efforts often end up via technology, somewhat solitary and isolated.

~ Perhaps church needs to figure out what “apps” it could use to effectively reach people.

~ If people are coming to stand before Old First and capture it as a portal, I wonder, what they learn us about from this passing brush by? Could we help them know more about who we really are? …Maybe it’s time we create another campaign of fence signs.

See you at church,