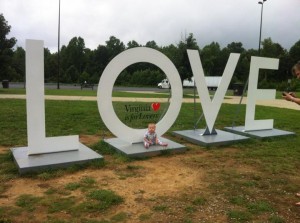 During our trip last week to Franklinton Center in North Carolina, we stopped at a rest area in Virginia. In front of the facilities building, there were four, six-foot tall, metal letters, spelling L-O-V-E. Individuals, couples and families were having their pictures taken with the message.

Ok, for Philadelphians, that might not be so impressive. We have our own Love sign, a version of Robert Indiana’s iconic pop art image of the letters stacked 2 on 2 and the “o” askew… ‘because love is never as expected or perfect” …overlooking the plaza at what we now call “Love Park,”

But I was impressed when one of my travel mates told me that the state’s tourism slogan Virginia is for Lovers — which the L-O-V-E sign clearly hearkens back to — was developed from the 1967 Supreme Court decision “Loving vs. Virginia. The Lovings, a white man and a Black woman, were sentenced to a year in prison for marrying. But in a landmark civil rights decision, the Supreme determined that Virginia’s anti-miscegenation statute, the Racial Integrity Act of 1924, was unconstitutional, and, thereby, ended all race-based restrictions on marriage in the United States. Recently, Loving vs. Virginia has been appealed to as a precedent for overturning bans against gay marriage.

What I had taken for an annoying, even empty advertising gimmick suddenly was bearing more gravitas… a much deeper meaning and significance for me. But, I admit, I doubted that the Virginia tourism board had been inspired by a legal decision that the state lost… and one that signaled some cutting edge, and doubtlessly uncomfortable social changes at the time.

So I did some research:

Virginia is for Lovers, debuted in 1969 and has since become a well-recognized and often imitated part of American jargon. In 2012, “Advertising Age” magazine called it “one of the most iconic ad campaigns in the past 50 years” on par with Like a Good Neighbor, State Farm is There.

The timing was right, the Virginia tourism website explains, “A favorite book in 1969 was Erich Segal’s Love Story. Jacqueline Susann’s The Love Machine was also a best seller. Henry Mancini scored the Love Theme from Romeo and Juliet.. And that summer, the Woodstock Music and Art Fair drew more than 300,000 young people for a weekend of peace, music and mud.”

The tourism website goes further with its sociological contextualizing: The Yippies would become Yuppies — and later, Boomers. The Volkswagen microbus with the peace sign on the dashboard gave way to the station wagon as the official car of a generation. But the commitment to movement and seeing the world remained, and there was a future for tourism and a new generation of visitors.

They may have been four words at the right time, but no one knows exactly why Virginia is for Lovers has been so durable. But part of the mystique of the slogan must be that it has been able to have real meanings for different people. Perhaps that’s why New York drew on it for its I Love New York campaign, and Maryland parodied it for its slogan Maryland Is for Crabs.

Noticeably, however, no where could I find any mention of an association between the slogan and Loving vs. Virginia case. So I went back to my travel mate to inquire after another source. The answer came back, “An interracial married couple, friends of mine, told me of the connection. Unfortunately, I don’t have any other info.”

Hmm, someone sometime somewhere — even if not the campaign’s originators or my friend’s friends — made the association. The promise of the state’s welcome as proved — ironically — in the Supreme Court’s unanimous affirmation of race-blind freedom to marry. Whether my travel mate’s friends were the first to make the association or not, I believe it was someone after the ad campaign’s originators. And one can see why it would be important and meaningful to a an interracial couple, even when their marriage was no longer illegal or even uncommon. And passed on, this latter day association was also, it turns out, meaningful enough for my travel mate and for me to give thanks for.

My point with this illustration is that “acquired associations” are important for how faith works. It’s how we find meaning and how tradition serves us. It’s how individuals appropriate a powerful personal faith from what otherwise might be little more than abstract, even empty themes or phrases.

Ancient texts would lose their relevance if each new generation could not associate them with their situations and questions. But if the old, old story can continue to speak to new days and extremely different social settings…The early Christian community found, or “associated” Jesus’ story in the suffering servant passages of Isaiah who in the original clearly spoke of the nation (not an individual Messiah). And enslaved people of African descent in pre-civil war America (and their descendants) found their suffering, struggles and hope “reflected” in ancient stories of Israelites as slaves in Egypt and their exodus.

“Acquired associations” are also important for how individuals appropriate a personal faith. Stories, traditions, rituals are connected with personal experiences or needs. Or alternatively, experiences of community and even personal interactions are associated with the larger and more abstract themes of our faith. That’s how our faith becomes real for us.

Surely a part of my own pilgrimage to faith was the assurance or greater reliability I found in the church community — where things were a bit more steady or just calmer than in other places in my life… because “at least at church people usually remember we’re supposed to try and be our better selves.” I know that’s not a foolproof promise. That church people are just as human as everyone else. And sometimes our failing or the disappointments in church hurt even more because they are at church! But still, over time, I came to associate those strivings and the more hopeful context they delivered to me with God, a sort of ‘budget example’ of the Kingdom if you will.

Even if the Jewish community that produced Isaiah and his prophecy would not believe their promises were about Jesus…
If the ad men never saw a connection between Virginia is for Lovers and Loving vs. Virginia…
If Moses, Aaron and Miriam had no idea of what was happening to them might someday have great meaning for slaves or civil rights workers in America…
if the founders of First Congregational Church in St. Louis never meant to give a lonely kid from a chaotic family a place to experience some sense of home…

None of these “arguments from origins” can undercut or deny the truth and the significance that others later found.
It’s incredibly freeing and hopeful when you realize it. God can work through all things.

Let’s thank God for the ability we humans have been given to make connections, even odd or unexpected, tangential ones. Associations that add on to our lives and wherein we live into greater meaning and significance.

Actually, I think this is also how many interpersonal relations work too, at least the ones that are most important to us. Someone or our relationship to them reminds us or signifies for us something even greater. And that person and the relationship and its significance all add depth and profundity to our living.

As we share those connections and associations, the meaning and significance and depth and profundity begin to grow and multiply. Associated meanings, even if they are apochryphal, are how God works. The mystique of traditions must be that it has been able to have real meanings for different people –through the interpolation of later experiences and insight — they pile up! And become a repository whereby they truly enrich and add on to and grow into abundant living. That’s why for all their humanness… that’s why religious communities are so rich.

In Old First’s prayer after reading Scripture, we give thanks for the Word “in and among us; for the Word lived in shared…” Faith is a living tradition of evolving meaning. Acquired associations because time and life go on. And celebrated or difficult, noticeable things happen and change. And suddenly, we take words that had been given with one meaning, and we associate them with other events or ideas… and new meanings. The original words are unchanged, but the meanings move on.

In the United Church of Christ, this is part of what we mean when we say “God Is Still Speaking.” Or applying the last line of the Virginia State Tourism Board’s website to our life with God: the love story goes on.