An Appreciation of this Congregation: Old First E-pistle 09.07.18 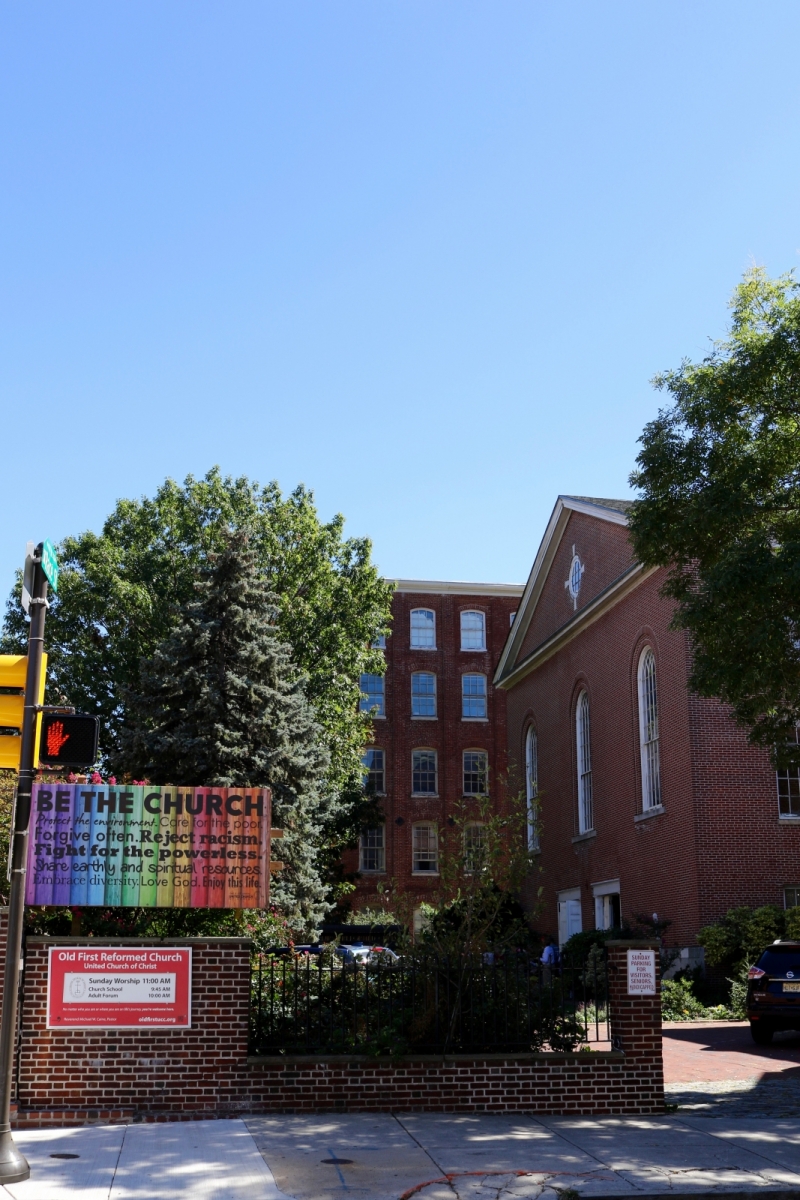 Last week, the E-pistle was a paean to Philly, occasioned by my having to show three guests around the city over as many months. This week’s E-pistle is going to be showing some love for Old First.

The last guest, Angelita, was a Waldensian from Italy, a student halfway through the Waldensian Seminary in Rome. I met her last summer, when she was sent to the congregation in Trapani where I had been preaching on Sunday afternoons. It was a new experience for her — the congregation was composed almost entirely of minor (under age 18!) migrants from Nigeria and Ghana. Worship was in English, with a strong Pentecostal influence and really LOUD praise music made by the young men and women of the congregation.

Let’s just say it wasn’t like the worship Angelita had experienced before! Waldensians are low-church, but very liturgical worshipers — closely tied to the exact words of a of a heady, rational, even a little dry liturgy.  (For comparison, the other Waldensian congregation I preached for, in Palermo last summer — also mostly Nigerian and Ghanian, but folks who had been in Italy much longer (and were on average older and more mainline African Protestant than Pentecostal —  thought I was “very spirited” because I would just speak unscripted / off the cuff when I led worship instead of using a liturgy.)

Angelita had spent 6 weeks with a progressive Presbyterian congregation in Cincinnati. And she was processing her experiences. She was particularly impressed by how many close friendships she found in the congregation, and how informal the members of the church were with each other. She and I spent a lot of time during her visit talking comparative faith communities. She also has experience of the Protestant Church in Germany. And I think vocationally, she is wondering where she might end up serving, in Italy, or Germany or America. So we had a lot of common data for comparing and contrasting and deconstructing.

She told me that traditional Italian Waldensian communities — the ones still peopled by white Italians, some of them even traditionally Waldensian (that in many places are being replaced by African immigrants, tend to be formal with one another in church life). I have always felt like that’s more of the case in German Protestantism too. In fact, I think the Germans like folks from the American church because they are attracted to our informality and social ease (as much an American trait as it is church-related?), even intimacy in the congregation (even if they aren’t sure they want their churches to be like that!). She also said that the Waldensians tend to easily be hyper-critical of their pastors. In fact, she said, it’s too easy for Waldensian congregations to withdraw their support from their pastors. I laughed and said that in the UCC, the congregational side of the aisle (from which I come) tends to be a bit anti-clerical, I think, because folks there insist on equality and democracy, and it sort of annoys that pastors, because of all their relationships, tend to have more power in the system.

I could go on:

German Protestant pastors tend to be a bit more in charge, maybe even high-handed. And German Protestant worship is sort of buttoned up, even when they try to let their hair down by using American Gospels and Spirituals.

Presbyterians are more organized that we are in the UCC.

And we UCCers often, use less overt God language, particularly trinitarian language, and talk instead using the descriptors of a faithful community.

The African Protestants are louder and move more — the often actually dance — in worship! And a greater part of their service is explicit praising of God.

All this is actually quite interesting to me — the various nexuses of denominational and national cultures and theological commitments, coming together — and how they form or give feeling and shape to the actual practice of congregations.

But what I want to share with you today, is that in all of this, I kept coming back to Old First as a prime example of what I find good, healthy, helpful, impressive in a local church. That’s nice for a pastor to be able to say!

I could tell Angelita about how despite our being just the opposite of a neighborhood church, people here really care about one another and build strong relationships. Folks reach out and help each other far beyond the four walls or limited hours of being in church together.

I also talked about a certain pragmatism in this community: Old Firsters are pretty good about not sweating the small stuff — or the various differences that we actually celebrate — and focusing instead on what our faith translates into for acts of service and loving our neighborhood. This leaves us room not to have to pretend so much — people around Old First are comfortable being themselves and being honest (sometimes a bit too honest!).

These first two good qualities then combine to make us comfortably justice-oriented without losing our appreciation for the faith and faith community that is the source of our drive towards justice. When I arrived at Old First, I worried that in such a service-oriented congregation, there might not be enough respect for the worship life and for the worshipping community. But that hasn’t turned out to be the case at all. It feels like most of our people are more committed to the worshipping congregation (yes, even in these days of decreased regularity!) and the service ministries are the outgrowth. Angelita on the other hand worries that Waldensians are only comfortable with the diaconal service their church can provide and has lost the sense of the ways that the congregations themselves minister to their members. .

And last but not least, Old First has room for the pastor to be a leader. Not the only voice or decision-maker! But, we seem to recognize a certain leadership role that the minister serves in a community of Christians, all ministers in their own right, but often with far-flung, extramural ministries of their own.

Life-changing service. At least, you all have changed my life.

Thank you.  And see you in church,