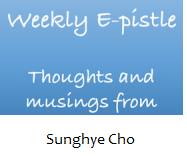 While Pastor Michael is on sabbatical, our weekly E-pistle will be written by different individuals.  This week’s E-pistle is by Sunghye Cho, an Old First member now living in Chicago with her husband, Haeman Hong, an Old First Member-in-Discernment who is working on his PhD in theology there.

Several years ago, Haeman and I adopted two cats, Oliver and Leo, from an animal shelter. These two cats were so cute and sweet. They were lovely creatures that God created, and they melted my heart. They soon became members of my family. 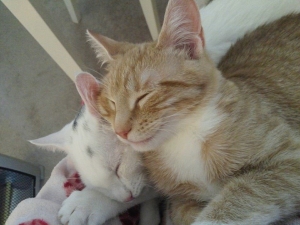 My love for Oliver and Leo spread to other cats, especially stray cats in Korea. Unlike the US, there are a lot of stray cats in Korea. There are some nice people, called “cat mom” or “cat daddy” in Korean, who buy cat food with their own money and voluntarily feed  a few  to even a hundred cats every day. But there are also vicious people, and stray cats often become targets of cruelty.  I feel  extremely angry whenever I hear of these crimes.  For example, somebody captured a stray cat and tortured it to death with boiling water and a burning chopstick. He even live-streamed this on YouTube, provoking many cat -lovers’ rage. How can some people be this evil? Then I realized that I was contradicting myself.  I was also being cruel in that I cared only  for cats, ignoring the many other animals being killed every day for food. Christians all confess that we are sinners, right? To be honest, I didn’t truly believe it, until I realized that I’ve totally ignored other animals’ pain. Jesus, I was a sinner too!  I wondered why. Why do we think that cats and dogs are different from other animals? For thirty years, why didn’t I understand that eating meat means killing animals.?  Is it fair to be cruel to cows, pigs, and chickens?

In Why We Love Dogs, Eat Pigs, and Wear Cows: An Introduction to Carnism, Melanie Joy explains that this is because we live in “the [invisible] belief system in which eating certain animals is considered ethical and appropriate” (p. 29). She calls this belief system carnism. Carnism justifies killing certain animal species for food.For example, we think pigs are lazy, dirty, ugly, and gross;, but we think cats and dogs are sweet and lovely. Since we perceive pigs as dirty and ugly, we feel less guilty about killing pigs  rather than killing cats and dogs for food.

But, let’s consider this. God made those animals. Did God create pigs dirty and ugly? Not likely. Genesis tells us that God was happy to create animals: “God made the wild animals of the earth of every kind, and the cattle of every kind, and everything that creeps upon the ground of every kind. And God saw that it was good” (Gen 1:25, NRSV).

Oh, yes, Genesis also tells us to “have dominion over animals.” (Gen 1:28), however this does not allow us to abuse and exploit animals whoare born and killed only for human beings’ gustatory delight.  I believe that Christianity is all about love—the love God showed us. We all are Christians and God’s creation, and animals are also God’s creation. Why don’t we show a little bit of compassion to non-human animals by consuming less meat? (Meatless Monday can be a good start!) I would like to end this E-pistle with a quote from  Animal Theology by Andrew Linzey:

We may pretend to what religion we please, but cruelty is atheism.

We may make our boast of Christianity; but cruelty is infidelity.

We may trust to our orthodoxy, but cruelty is the worst of heresies.