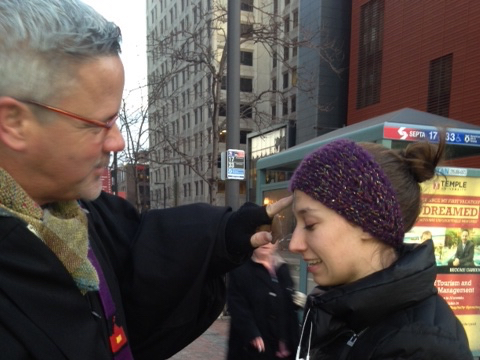 You’ve heard of “Tuesdays with Toomey?” Senator Toomey promised not to be a “rubber stamp” for the Trump administration’s agenda, and he won reelection with this message. So people have been showing up every Tuesday midday to make their voices heard, so that the Senator can accurately represent the interests of ordinary Pennsylvanians.

Well, this coming Wednesday, Senator Toomey is moving his Center City office to the Custom House at 2nd and Chestnut. And 12 noon to 2 there is an “event” planned called “Welcome to Old City: Toomey’s Office Warming Party.” People are encouraged to bring gifts as well as signs. Rumor has it, after no one could get through on the DeVos nomination, that his office needs more phone. But at Old First, it occurred to us that Ashes might be the gift the Senator needs to help him repent and go a better way with and for the people of Pennsylvania.

Everyone has something to repent of! Since Wednesday just happens to be Ash Wednesday, and Michael’s an old hand at “Ashes to Go,” and there’s going to be a crowd at 2nd and Chestnut, and John O. is very excited about helping out….

In the Book of Jonah, the whole city put on sackcloth and ashes,
and turned from their evil ways and the violence of their hands.

Today is Ash Wednesday. Our nation needs to turn from its evil and its violence.

You may ask for the traditional sign of the cross in ashes
on your forehead or palm as a reminder of your committment to repent.

Or you may ask for the imposition of ashes in another form that makes sense for you:
the point is we all need help finding that better way that this country and the world is waiting on…

Ok, the exact wording of the sign is still in draft form, and Michael is taking suggestions! But you get the idea — adding to the Welcome party by contributing what faith says about our needing to turn from evil and violence in order to do the good that is expected of us. Maybe Senator Toomey’s new office will give him a fresh start. Who knows? Maybe Senator Toomey will come out and ask for ashes?

If you wish to join Michael and John, you know where to find them…