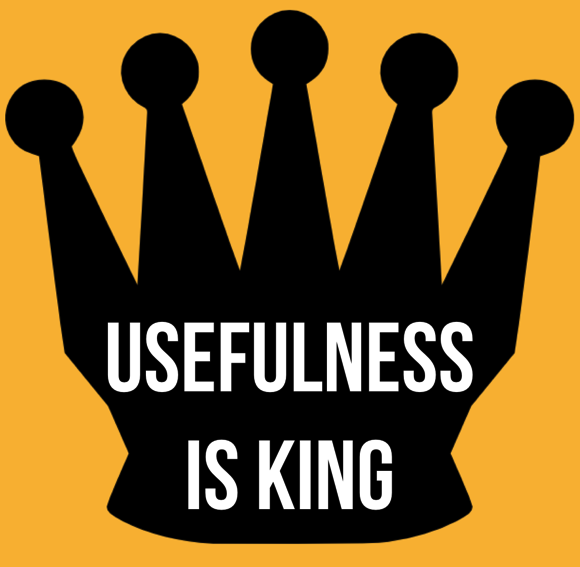 Last week’s E-pistle, “Why Is Asking for Help So Hard?”, got me thinking about a related topic. I’m calling it ‘bearing the cross of usefulness.

Again, this struggle, having heard others speak of it…I know it is not mine alone. Empty-nested mothers have explained to me, “Now that my kids are grown and not here, now that they don’t need me immediately or as much, it’s like I’ve lost too much of my purpose.” Similarly, as a pastor, I often hear elderly people — whose physical or mental capabilities have diminished as their fragility increased — fret, “I don’t really know why I’m still here; I can’t do anything; I’m of so little use to anyone.”

Could it be fears like this belie a deeply wrong assumption many of us live with? That we are only worthy of the air we breathe, the food we eat and the space we take up on this earth because of some creative productivity that we can translate those resources into. But doesn’t this sort of reduce humans to a means for some end?

I realized at some point in my growing up — I don’t mean those years before I left home at 18, so much as in my 30’s when I was actually coming to terms with my upbringing — that perhaps my family of origin never really saw “me,” who I really was, so much as “how I was useful to them.” To be fair, I probably made the same mistake! The roles in my family followed closely those described for many families affected by alcoholism. As the first born child, I served as “the caretaker” — my job was to have few needs of my own, so that I could cover a host of needs for the family. Psychologists explain that such an over-functioning role often masks feeling of inadequacy, fear, and helplessness.  It all sounds more serious or dire or condemning than I experience it these days (I have worked hard on these issues!), but the same dynamic still play out in my life. But, over the years, all this has made me think a lot about how our sense of identity and value can often be tied too closely with our usefulness. But plugging into my inherent value, deeper than my various utilities, is still a real challenge.

When Beth W., in serving as a liturgist lately has spoken to us about finding where and how we are truly worthy in ourselves, this is, I think, a very similar struggle, though perhaps come at from a different angle.. For me… for too many of us, our worthiness is too closely tied to our usefulness or our productivity. Can we imagine rather that God looks at us and loves us not because of how much we can do or what we accomplish, but rather, that God’s love is tied to something deeper, more integral than our doing? God’s love is the simplest of all (to borrow from Bernstein’s Mass) — loving us in our very being. God loves you not for what you do, but for who you are. God loves you in your most essential self. Or from before you were, while you are (no matter how well you are at doing it!), and long after you will cease to be, because that love is not tied to our adequacy, functionality or efficaciousness.

If we cast off the burden of usefulness… wait, first let me clarify: I’m not saying that we shouldn’t be useful. I’m simply pointing out that we ought not judge ourselves by our usefulness, or try and justify ourselves by what our lives produce. God’s love is better than that. Deeper than that. More merciful than that.

Think of it this way: does God love people whose various situations make them less functional, less productive, less useful to themselves or others? Does God love less someone whose mental or physical challenges makes impossible anything akin to the job or family lives that most of us enjoy?  Does God care less about people in the last, ailing days of their lives, that time when the West Indians say they are “traveling” — not yet gone from this life, but no longer functioning as they used to? Does God love less the people whose effects are primarily negative or destructive, or, rather, does God just cry more over both those who are harmed and the one doing the hurt?

It’s my belief that there is a very deep and basic theological principle in these sorts of questions. They are about how we see God, how we see others and how we see ourselves. I am not sure which order that series really belongs in — if it’s a process of being able to see one so as to see the other, it eludes me! But psychological formation aside, I believe, as a Christian, that God’s love comes first, is pre-existing. Not coming after we have somehow earned it, but instead because God has actually created us to be loved. Think about that. Think about it long and hard. You are not what you accomplish. Or what you fail at. Or how others need you. Or how much they need you. Rather you are God’s beloved. Plain and simple. Beginning and ending of your story.

Can you love yourself… not for what you do, but for who you are? God can…

How different then should you and the world treat you? How different should you treat others? This undermining of ‘reducing ourselves to some means to another end’… this struggling to see ourselves as our end in ourselves… it all seems to me a good meditation for Lent…