Buy Your Chance for the Phillies' Gift Basket (Support our Shelter) 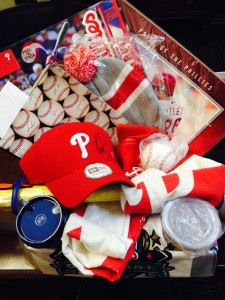 This basket was donated to the church on behalf of the Phillies. Originally it was meant to be raffled off as part of an event to raise funds for the men’s shelter here at Old First. Although the original purpose for the basket fell through, we still want to spread the word and raise funds for the shelter while raffling off the basket.

In the basket there is an assortment of merchandise, including a t-shirt, a travel mug, and a few different Phillies caps. It also includes some signed merchandise. Carlos Ruiz, the catcher for the Phillies since the 2006 season, signed the baseball included in the basket. Then there is a signed cap by Ryan Howard, who has been with the team since 2004.

Tickets for the basket began being sold on the picture event that happened at the creche on December 8th. Our efforts will continue, with the basket being raffled off in the beginning of 2014. Tickets cost $5 a piece and can be purchased at social hour after church for the next three Sundays (Dec 15th,22nd, and 29th) and will be raffled off at social hour on January 5th. If you are interested in purchasing a ticket but will not be able to make it to worship, please send me an email at volunteer@oldfirstucc.org to talk about a way for you to be able to get the tickets.

Every dollar that is raised will be going directly to the shelter here at Old First, so think of getting involved. Even if you aren’t a Phillies fan, I’m sure you have someone in your life who is.