Capital Campaign Leadership Commissioned (to be our Calebs) 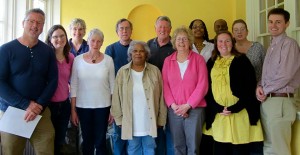 In worship on Sunday, May 4, Michael spoke of Caleb who, with Joshua and a band of others, were sent ahead of the people into the Promised Land to scout the possibilities and prospects. Most of the party returned worried that the challenges and obstacles were too great… that Israel had no way of claiming the Promised Land.

Only Caleb, however, never doubted God’s promise and support. He silenced all the fretting and nay-saying with his “we can do it” commitment and hopefulness.

Michael was referring to this sacred story as he asked the congregation to join him in praying for the efforts, creativity and effectiveness of the people who have been names to offer leadership to our capital campaign. Essentially, in commissioning these leaders, we were asking God for a whole cohort of Calebs. (The full roster is below.)

Of course, Old First hasn’t been lost and wandering for 40 years. But we are a good decade behind in some deferred maintenance. And we’re now 5 years into growing our congregation and growing the financial support we have for doing ministry. And imagine where we could be in ten years.

As Jonathan V. said at last Saturday’s Leaders’ Retreat, “I am almost afraid to say it, lest we become complacent, but our finances are in pretty good shape.” Adam S., our treasurer, said when he gave the last financial report, “We’re doing better than we’ve done in my whole time working in finances at Old First. We now have a growing financial base.”

But we don’t have enough to catch up on the deferred maintenance do everything we feel called to do. Michael always comments: “We’re a church, not a bank, so we’re never going to have that much money. And if we ever find we have ‘too much’ …that means we need to be doing more ministry and mission.”

But with the strengthening finances and more people getting involved in our ministry, we are recognizing an opportunity and looking forward to crossing over to the next stage of our life and service as God’s people.

Our capital campaign, “Extending our Welcome; Strengthening our Service — The Campaign for Old First,” is getting going. It is hoped to become one of the ways we:

1) build an increasingly vibrant worshiping and serving community, and
2) undertake planning to move our outreach ministries to the next level.

We are also hoping that the process and conversations around our capital campaign will help:

~ Old First’s primary worshiping / serving community come to a new understanding, deeper commitment and more evocative articulation of our mission for the next leg of our journey following Jesus.

~ identify, invite and welcome people currently beyond our community who may wish to support our mission. It is hoped that some of these people will also wish to become actively involved in and participating in our work. (Old Firsters, you can help by beginning now to think who you might know!)

~ introduce and make a part of our community and congregation’s culture a program of planned giving whereby people consider making decisions to give at a later date, for example at retirement or upon death.

~ end up on the other end of this capital campaign with a church community strengthened in relationships, mission commitment and on-going financial resources for accomplishing all that God is expecting of us.

There’s a tagline in the video were are producing for the capital campaign:

Unapologetically different.
Gathered for service.
Join us for a surprising journey.
(Caleb could have said that, as he invited the people to cross the Jordan and claim their Promised Land.)

PLEASE KEEP THESE LEADERS,
THEIR WORK AND
OUR CAPITAL CAMPAIGN
IN YOUR PRAYERS: