With Marta preaching, Michael got to do the parts of the service usually assigned to the liturgist.

And he began the Invitation to Offering by asking Dan B., the Endowment Director, and Mike W., the Capital Campaign chair, to join him up front with the Ushers. (There was also a nice moment where the ushers all spun around on a dime as if they were “The Temptations” in a 1969 concert!)

“Money holds an uneasy position in our tradition,” Michael began. “More often than not, people say something like ‘I don’t want to come to church to hear or talk about money.’

There already seemed to be a lot of negativity about money in the New Testament writings. Jesus and the money changers. Thirty pieces of silver. ‘The poor you will always have with you.'”

Michael went on to explain that he often wonders if the “ambivalence” towards money in our tradition comes from Jesus himself, or if it was “read back” into our text as the New Testament canon was being formed by the early church.

But then he suggested, “Money can sometimes be great, good news, even in church.”

Like when people at Old First contribute richly to support all our ministries, both the spiritual suppport of this community and the service it performs.

Or the generosity of past generations who have left us with an endowment that provides over $40,000 to our ongoing expenses and lets us creatively finance the new air conditioning sytem or retire debt we carried too long.

Sometimes when the church needs money, people want to tap the endowment resources. But that’s short-sighted and perhaps even disrespectful to the people who donated to the endowment. We don’t want to use the endowment for withdrawals to cover cash shortfalls. We want to maintain and grow it so its interest can help provide yearly income as part of our annual budget.

The endowment has offered us a cost-effective option when we have needed cash for capital expenses. Both with the replacement of the cooling water tower for the Sanctuary’s A/C System and for Refinancing in Faith, we were able to in essence loan ourselves money = $33,790 (1 year, 11 months).and have the interest we pay go back to our endowment — so we don’t either lose on investment income or pay interest to an outside institution. ($15,870 and $31,750 borrowed respectively , when the 3.3% annual interest is added to the amount of both loans comes to a repayment amount now of $51,759)

Too often churches effect such loans to themselves, and never pay them back, in effect drawing down endowment capital without acknowledging it. We only borrowed from ourselves because we foresaw our ability to repay coming from the promise of our current Capital Campaign. In fact, we promised ourselves the first Capital Campaign dollars in would go to repayment.

So the really good news? We are ready to pay ourselves back! And we are able to effect this repayment three months earlier than our receipts projection promised! That means you all are making your contributions on your Capital Campaign pledges at a healthy and generous rate. And we are seeing the results.

Before the ushers dispersed into the congregation to collect the morning offering, Mike W. handed Dan B. “the check” in an envelope that read “Repaying the Endowment via the Capital Campaign (in honor and respect to those who have gone before us and whose generosity has povided us with the Endowment as a resource for doing ministry today and in the future).” Mike W. added an invitation to clap for our stewardship job well done and the beginning of the fruits of the Capital Campaign. And Dan B. echoed the excitement and thanksgiving: our careful shepherding and good discipline promise that we can take full and responsible advantage of the opportunities the Endowment offers us.

But you know what? Both the title of this article and the words on that envelope are shorthand that don’t quite capture theologically what is happening. Better would be: 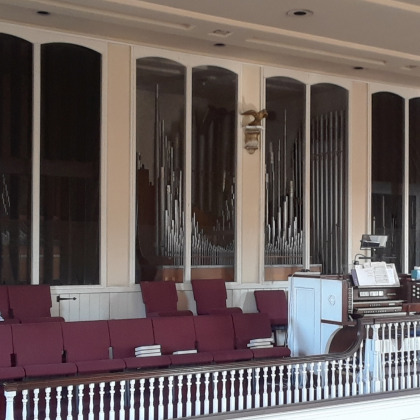