Celebration Sunday (where we are with the Campaign for Old First)

On Sunday, Nov. 16, we were supposed to have all the commitments pledged for the capital campaign in hand. Well, we didn’t quite make that. Which says a lot about how busy are folks’ lives are. Maybe even more about Old First.

Each year, the deadline for our Stewardship Campaign is likewise more wishful thinking than hard and fast reality! But, Old Firsters are a very faithful and generous bunch, and we have been not only making our budget year after year. Our budgets are steadily increasing each year, with last year’s budget just over $400,000.

In other words, we’re not done yet, even if the main stage events of the commitment phase are behind us! And we’re moving on — for instance, we introduced at the Potluck Luncheon afterwards the architectural firm that has been recommended to work with us. We won’t get started until after the Christmas holidays, but expect more information on the firm and the process before us to be shared in the next few weeks. But we have a whole bunch of Campaign for Old First commitments, so that all during the worship service last week, we kept removing pieces of a giant jigsaw puzzle — which has become the metaphor for how everyone fits in around here and how we’re cobbling together our resources to do great things out of this campaign.

By the time all of the pieces of the puzzle were removed in the Sanctuary last Sunday, we had, as of that date, just a few dollars short of $560,000 pledged. But as Mike W., the chair of the Campaign for Old First announced, we still have over a dozen families who’ve promised to contribute whose pledges we haven’t actually received and so aren’t part of our total. In other words, we’re confident we’re going to break our $600,000 campaign goal.

Mike W. reports one family handed him a commitment card at the end of worship. And a few more have been received this week.

Which is both permission-giving and encouragement: if you haven’t yet turned in your commitment card, it’s not too late. Please do so as soon as possible so that we can finish our totals and report we’ve met our goal. 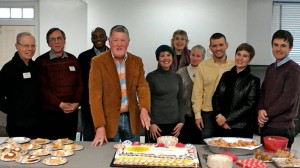 And, of course, thanks for everyone who has worked on the Campaign so far. The committee to identify the architect. And the Capital Campaign Committee itself. And Susan Mitchell, our consultant. And Mike W., the chair of the Committee. Great job, church, but we’re just getting started…