Could You Help Out with a Creche Ministry Team? Believe it or not, we have already begun to plan for Christmas, which among other things to get done, brings up all the work and possibilities around the creche–Old First’s live nativity scene.

You might remember last year’s success with Picture Day at the Creche. Regulars from church as well as guests we knew and complete newcomers came and brought children one Sunday morning to have their pictures taken with the animals corralled in our barnyard. Kids could also make frames, so that their pictures might be used as gifts for their loved ones.

After that day, Suzanne and Michael spoke about what had worked to take greater advantage of the creche as a way to reach more people at the Christmas season. But they were also were aware that more could have been done to make even more of such an event. 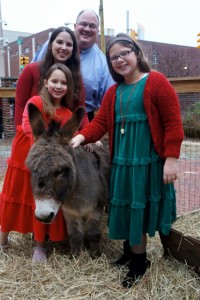 It was in evaluation the successes and learnings from Photo Day at the creche that Suzanne and Michael realized that the creche, certainly one of Old First’s biggest intentional outreach efforts, had very little leadership. It has sort of run on autopilot. Or if there is a ministry team, one might say it is only made up of staff.

Suzanne suggested that this year we might see if we can gather a ministry team of folks who would like to work on the creche ministry.

~ making sure the regulars have all they need to set up and break down the creche
~ advertising the Christmas creche and “the church with the animals at Christmas” farther and wider — and in ways that might help people know even more about Old First’s ministries.
~ organizing to get the animals fed and the corral mucked.

And perhaps Picture Day at the Creche could be even more successful this year? 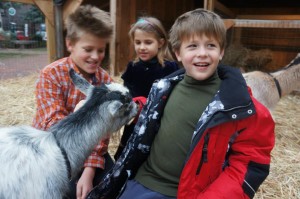 Also, there is a plan emerging — a community art project actually — to replace the mannequins who stand in for the live people every day the creche is up, except Christmas Eve (when we provide a living cast of characters to animate the story). The Creche Ministry Team could work on that too.

None of this is an overloading or unending amount of work. Especially if a ministry team formed and got going now. (Think about it, Billi and Mindy and Michael have handled it in the past.)

And it’s a time limited opportunity to serve– the animals go back to the farm before New Year’s, and the creche is deconstructed and stored that next weekend. It’s also a great way to work alongside of and get to know some other people.

If you would like to get involved and help out, please speak to Michael, inform the church office, or write a note on the friendship pads we pass at the beginning of worship. Michael hopes to call an organizing meeting of such a ministry team as soon as possible.