(Michael preached a “conversational sermon” on Sunday, April 14, as he did as well on Christmas Eve. More off the cuff and story telling, from the front of the sanctuary, rather than the pulpit, and without a text… As we don’t currently have the capability to tape sermons, instead, he offers a brief summary.)

Paul’s conversion on the Road to Damascus is threatening: gradual change is always easier to take than radical revolution… because the stretching and growing involved in change usually causes pain. We fear “total transformation,” except in the extreme conditions in which we know it is the only way to save us.

Another reason Paul’s conversion is threatening is that religion makes more demanding claims on us that almost anything else in our lives– because it is, by definition, about ultimate things.

Families can weather disagreements for years, but when religion splits them, there are all of a sudden breaks that are never healed. Often times, families can’t even find a detour around their religious differences.

Because religion lends itself to absolutist claims. It’s often understood about right and wrong, with a certain black and white nature– about Truth, capital “T.”

That’s why, ironically, being a source of new life, religion can also — maybe as often — turn out to be a destructive force that divides, tears apart and robs people of the fullness of life.

That’s what we saw with Saul. The way he understood God and faithfulness, for him they were a one and only way sort of proposition. You either got it right, or were worthy of death. There could be no alternatives. No different maps. No other roads. No multiplicity. No ambiguity. No compromise. There’s something about religion that makes it particularly prone to such thinking.

The way he understood was ascribed as RIGHT. Everything else were threats best destroyed. Religion understood as “my way of the highway.”

Did you hear the line that Hannah read, when Jesus asks Saul, “Why do you persecute me?” It’s sort of haunting — half open question, but also Jesus’ pain, and judgement, and disappointment.

How often are we too guilty of falling tragically short of the openness and acceptance love and service to kindred and stranger alike that Christ means for his followers?

I suspect there are a number of ways we persecute Jesus. The two mission commitments of this church that we’re going to highlight in a minute:

suggest that we persecute Christ:

…when we fail to care for the creation that God has given us to be our home, and

…when we fail to do what we can to make a more just and equitable society that serves all God’s children.

But I want to stick with Saul. Because it’s the particular crime that’s so easy for religion to devolve into. The reason many people believe that religion is more trouble than worth.

We see it happen in church. Tragically in big ways– inquisitions, crusades and holocausts. But also in much smaller ways. We just haven’t really been taught how to imagine religion that doesn’t insist that someone who is other is wrong.

Even in a healthy congregation like Old First. We sometimes claim too much. We take our experience or opinion or need or fear… and we “universalize” it as if it fact or true for everyone.

Instead of saying, “I absolutely love that hymn about New Dimensions;” we declare, “That’s everyone’s favorite hymn in our church; we should sing it every week, or at least once a month.” There are some people who find that hymn one of the “newfangled ones;” and wish we would sing more often hymns that his grandmother would have known.


Instead of saying, “I want more church opportunities outside of Sunday morning, ”
or “I wish our holiday traditions never changed,”
or “I need people to be more regular in their attendance…”

… we pervert the conversation by talking for others, about what “everyone” thinks, as if we are all the same, of one mind, reacting identically.

Remember last week, how I talked about the 80/20 rule — how at Old First, we hope that 80% of what you encounter here makes you feel at home and helps you feel more at home in the world.

But 20% of what you experience here, expect that proportion to challenge, maybe even displease you. Because we are a community made up of very different people. With different backgrounds and understandings and needs and hopes. One version or experience or statement can’t fulfill every person, anymore than one description or one explanation will work for us all.

And when we get like Saul — we all do sometimes, whether in big or little ways — and try to push our way as the only way. Sort of “it’s my way or the highway” tactics for religion… well, then we’re persecuting Jesus.

Because we are forgetting that those who are different can be equally his and loved by him. That he came for the whole wide range of folks. And more than for one religious set. As they were all loved by Jesus, they are all to be loved and respected by us too.

Christians, speak for yourselves. And listen to others. We’re enlarged, stretched and blessed even with, perhaps especially when someone else has something to say that’s not easy for us to hear or understand or agree with.

Because in God’s love, religion is more about freedom than it is exclusivist truth claims just as religion is always more about how much you love than who is right and wrong. 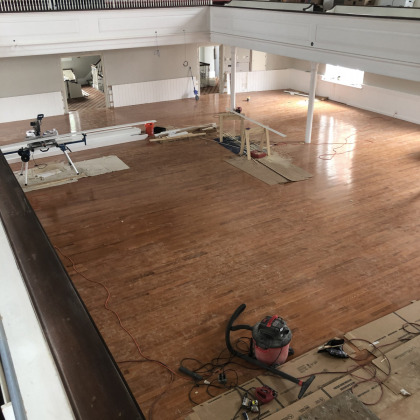 Progress Around the Church!