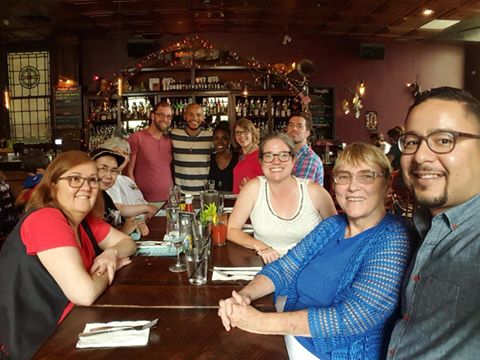 On Anniversary Sunday, Michael finished his sermon by inviting the congregation, in lieu of Passing the Peace, to have the last word — as they engaged in a celebratory game of “Church Anniversary Human Bingo.”

The object of the game was to try to find a different person for each “boxed description” in attempt to get 5 in a row, either straight or diagonally, and call out “Bingo.” People were game, and it was a loud and raucous 5 minutes or so of sharing about our faith and ourselves.

But Michael had suggested that it was also an investment in the church, “because relationships are, in our understanding, one of the ways we build people up and make leaders. And our world and our congregation… we need more leaders today. In fact, the way things are, we need everyone — in her or his own way — to be a Christian leader, someone that shows others inside or out of the church what it looks like to be a follower of Jesus.”

One person got 5 in a row pretty quickly, but Michael didn’t hear her “Bingo.” And her friend said that she cheated, starting early! It was a fun time.

But underneath this celebration of who the church is today, coming from what it had been yesterday and leaning toward what it will become tomorrow, there is also something more important — something about the faith that we share and the faith we sometimes differ on (without getting too fitutzed over our differences… really, they are just a reflection of the magnitude of God!) Getting to know one another is sacred business. So is getting to know the faith that holds us together by grace. It’s a great source of power. And mercy. And justice. But if we don’t know it and each other well enough…

So here’s another chance, but without a time limit. It’s no longer just Bingo, but completing the whole card. Can you identify 25 different people in the Old First community who could be described at least in part by the “shorthand” in each box?

But here’s the trick — you can’t just know the person, you have to talk to them about the description before you can write their name in the box. For example, most of you probably know that my ex-wife is Jewish, and my children identify as both Jewish and Christian. Ok, but for this game, knowing that is not enough! In order to write my name in the “Has family who are a different religion” box, you need to communicate with me about it — ask me or write me or call me or text me.

But the people who can come up with names for all 25 boxes, well they will each get to be our “honorary Bishop for a Sunday.” (We don’t have Bishops in the UCC, but since a Bishop is an “overseer of the faithful,” it seems like a good honorary title. You might even get to sit in worship with a big pointy hat in a special chair!!!) And afterwards, Michael will take you to Franklin Fountain for ice cream (ice cream is a special temptation to Bishops).

Michael wrote the descriptions specifically: there are people for each of the descriptions. But if 5 of your 25 are people Michael did not know that description about them /their faith — your Franklin Fountain ice cream becomes a Sundae instead! And maybe you will be “Bishop for a Communion Sunday” or some other special holy day!

Ready, set, go: talk to people and identify 25, a different person for each square. Then turn your answers into Michael. There can be more than one winner — that’s how grace works…

See you in church (hopefully with your card all filled out),