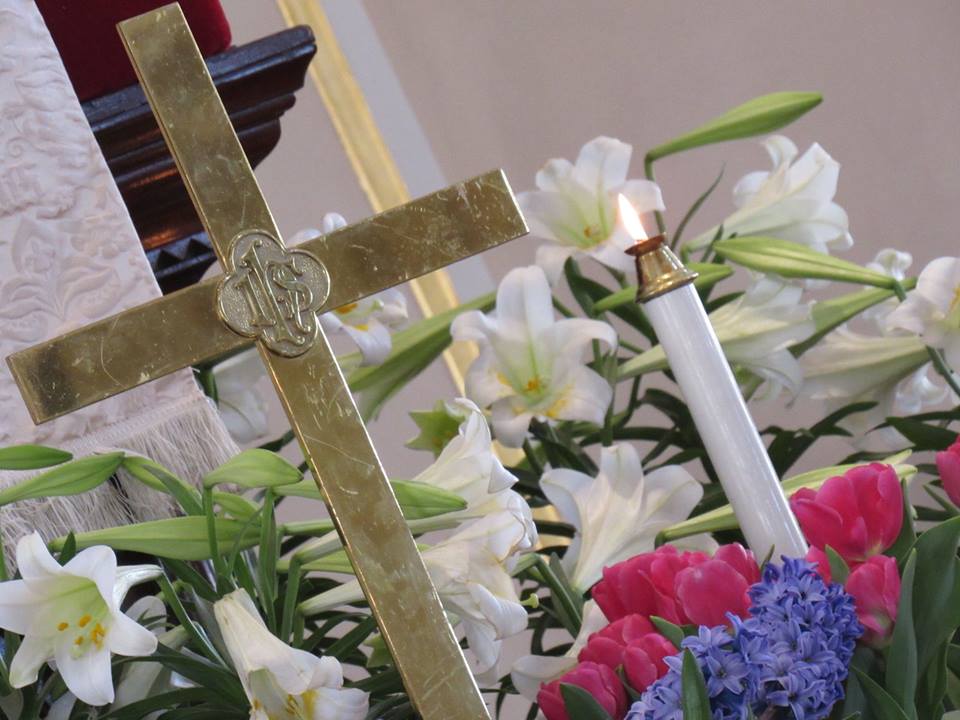 For those of us in the Northern hemisphere, Easter’s occurring in Springtime seems fitting. The natural world, hibernating in the deathlike tomb of winter, suddenly springs forth in all the buds, blossoms and birdsong of the reawakening season. The world around us actually reflects some of the resurrection power we believe God showed and shared in Jesus. Could it just be a part of reality, no matter how hard it is for us sometimes to perceive it!

The wonder of Spring springing might be felt more so this year, as the winter cold has lasted almost without any interruption to Maundy Thursday, when suddenly the sun is shining, we expect to hit 70 degrees and the people have taken to the streets to enjoy the change of weather!

Someone I met recently who has a bit of an axe to grind with Christianity tried to dismiss Easter by suggesting that it was simply the church’s appropriation of some earlier pagan Spring festival. I laughed and replied, “Well, no, it’s the Christian appropriation of the Jewish passover, but I don’t know if historians think that the timing or narrative of the passover find some antecedent in a celebration of another, earlier religion.”

My conversation partner, not yet having exhausted his anger at the church, came back with “Well, you know that Christmas was really first a pagan holiday.” Patiently, I responded, “Um, the dating of the celebration of Jesus’ birth does trace back to an earlier non-Christian holiday marking the shortest day of the year. They had to choose a date because we can’t really tell from the Biblical record when the child was born. But the holiday itself hearkens back to the fact of a birth of the one we know as Jesus, who grew to be and be recognized as the Christ.”

My “combatant” didn’t know, perhaps, but It is true that there were other and earlier resurrection narratives in other faith traditions: Sumerian, Egyptian, Greek, Roman. And, curiously, these same stories often involve December 25 (or thereabouts) as red letter dates in the stories they tell. I upset one of our own one Easter when I posted an article on cross-cultural similarities of religious death-resurrection narratives. I didn’t mean to. For me, it was no assault against our faith, so much as a celebration of God’s complexity and cleverness.

Could cultures and faiths have borrowed from each other? Certainly, meaningful details or even layers of meaning, grow legs, like the people who hold them, and travel. They mingle, intermarry, get passes on and changed.

Or perhaps, comparative similarities exist because despite some radical social, political and economic differences in societies, human experience, rock-bottom, still bears similarities, and as we all struggle and search for understanding, we come upon conclusions, mythic and metaphoric, that are not completely dissimilar.

Does all this, or any of this mean that Christians plagerized the story of Jesus’ resurrection, and it’s completely false? I don’t think so. Instead, it could mean that there is some deep truth written into the very fabric of human experience and reality about death not having the last word. We recognize that truth in the story of Jesus’ death and resurrection as others from diverse faiths and cultures has seen something similar and use their narratives to describe it.

In other words, I’m saying, I’m not put off by people who see the Christian paradigm of death and resurrection as a reflection of spring. Likewise, my faith isn’t shaken by the narrative similarities of other faith traditions’ descriptions of death and resurrection. I’m not even upset if scholars can show the syncrenistic process by which other faith traditions were incorporated into our Christian Scripture, understandings and belief.

Why is my faith so secure? In large part because I know death and resurrection myself… as possibilities in my life and our experience. I have known people who were lost, and then found; dead, then alive. I have experienced such transformations, albeit in small print, in my life too. And I have discovered, or been given to see the amazing, transformative power of love.

I am not a Christian because the church or the Bible tells me it’s the truth. Or because the social pressure from someone or some institution or social expectation tells me I should be. Rather, I am a Christian because my experience of life finds a meaningful reflection in what our faith says. It’s sort of like my loving a poem, not because it tells me what reality is, but because it’s my job as a person to try and figure out what is real, and Christian faith gives me words for expressing a reality I can intuit but often have trouble articulating.

I once said in a sermon, much to the pain of a retired pastor listening, that “whether or not the miracles of Jesus’ as recounted in Scripture actually happened like the Bible says, I don’t really care. Because I know in my own life and in the lives of others that Jesus can heal, comfort, challenge, teach, quicken and save.” I’m a Christian not because Matthew, Mark, Luke and John said he was resurrected, but because I have experienced him as alive.

Beloved, Easter is for me beautiful because it has is poetry and story and sound and sight that recognizes what I know to be most important and real about that which is most fully life. That’s the reason I hope to see you in church…