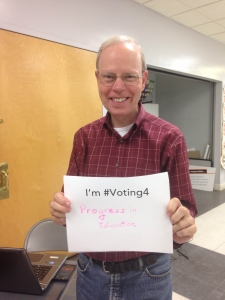 Last Tuesday night, Old First volunteers joined with volunteers from St. Malachy’s Catholic Church as a part of POWER’s effort to reach out to unlikely voters in Philadelphia and encourage them to vote in the election on November 4 (just 4 weeks away!)

We used what is called a predictive dialer phone bank (“P-Dialer”) which, once online, is an efficient way to connect with the most voters possible.

In under 2 hours, with 19 volunteers, we made 714 attempted calls and got 143 voter commitments collectively! The 13 Old First volunteers who showed up got 103 of those commitments ourselves and had the chance to have some great conversations with voters about why they think elected officials should make public school funding a priority in Pennsylvania!

Old First’s goal is to again secure commitment from at least 200 voters and we have one more chance to reach our goal. Our next (and last) p-dialer phone bank will be next Wednesday, 10/15 at 5:30! If you’re interested in signing up, click here for on-line registration.

We will try to get started at 5:30, so be there as close to that time as you can and then we’ll take a pizza break in the middle (bring $5 donation for pizza if you can!), and get you out by 9!