What’s the Story Behind the Franklin Square Burial Ground? 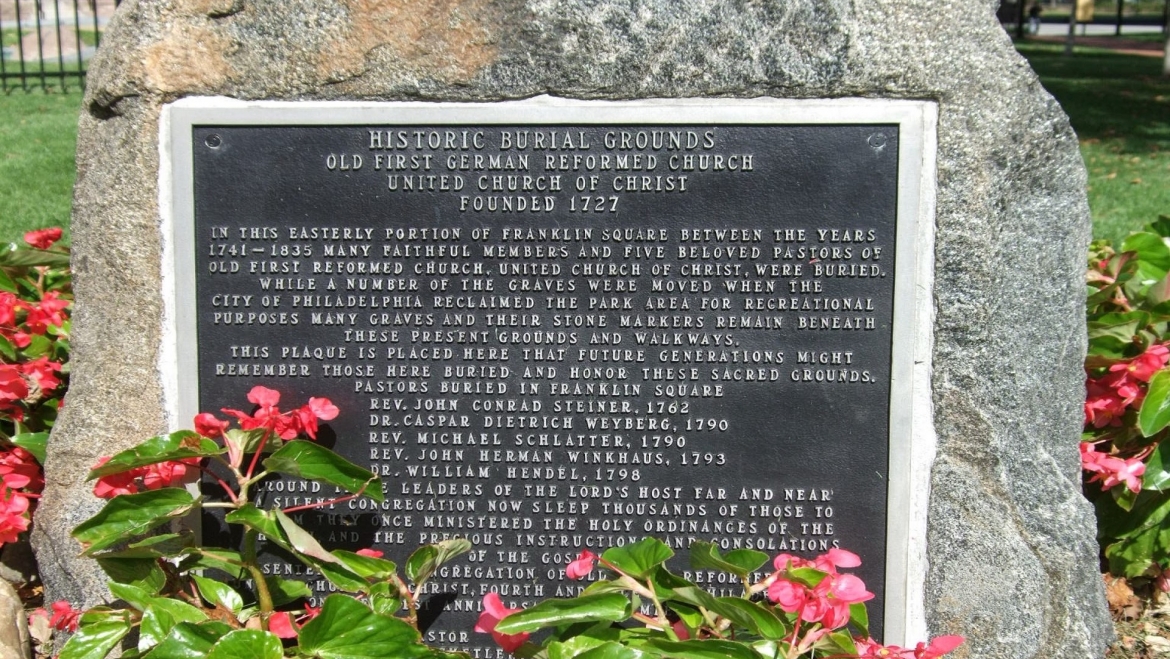 In 1741, members of the congregation purchased land for use as a burial ground in Northeast Square from the sons of William Penn.  In 1772, the deed for the land was transferred to the church.

Soon after the Revolution, the city started the proceedings to recover the burial ground.  Finally, in 1836 the Supreme Court of Pennsylvania decided that the sons of William Penn had had no right to sell public land to the church.  In wake of the decision, the city gave the church a period of time in which to remove the bodies and gravestones.  The church was told that any remaining gravestones would be laid flat and the area covered with 2 to 5 feet of fill.  Given that there were in excess of 3,100 burials in Franklin Square and given that the congregation was in the process of tearing down their 1772 building and constructing a new church (our current building), it’s hard to believe that the church was able to afford to move all the remains out to New Cemetery located between Mulberry (Arch) and Cherry and between 17th and 18th Streets.  The remains must have been moved, though, because so few bones were found during the restoration of Franklin Square in 2006.  The gravestones were a different story.  Many of them were uncovered.  Excavation revealed, however, that the gravestones were not laid flat as the city said would happen.  Instead, the city used the gravestones as curbing along the radiating pattern of pathways in the square.  (See photo) 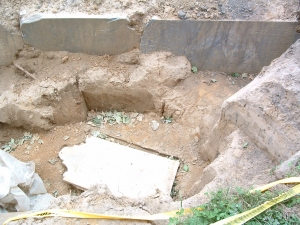 Because the gravestones had not been exposed to the air, the inscriptions were very legible and in excellent shape.  The supervising archaeologist recorded the GPS location, size and wording of every gravestone uncovered.  All the gravestones that could not be left in place but had to be removed due to construction were recorded and carefully re buried together in such a way as to conserve them. The city of Philadelphia refused to give Old First any of the gravestones uncovered in 2006.  Would that the  gravestones of Rev. Michael Schlatter, Rev. Casper Weyberg, William Will, Rev. Herman Winkhaus, or Rev. William Hendel had been found, but those and at least 3,000 others are likely still there under Franklin Square.

In 1978 Old First installed a memorial marker in the area of Franklin Square where the burial ground was located.  During the construction work of spring/summer of 2006, the Old First marker was removed, restored, and re-installed to the east of the caddy shack and a descriptive historic marker was erected along a nearby path.  The gravestones displayed in the lower narthex were found during work in Franklin Square prior to the Bicentennial.  Some additional gravestones are stored in the crypts. Anne and Robert Calvert generously funded the conservation of the gravestones and the installation of the Franklin Square Burial Ground display in the lower narthex in 2004.