From Our Archivist – Orianna Development Corporation 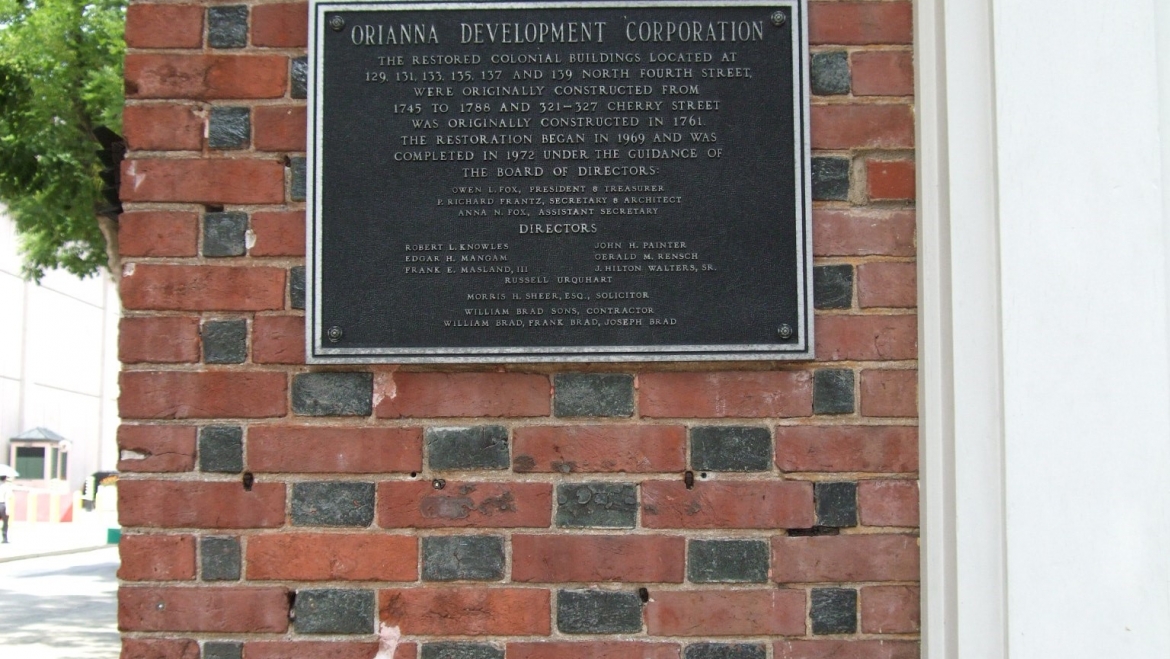 When Old First decided to take up the offer from the Philadelphia Redevelopment Authority to buy back their original site on Race Street below 4th plus the parcels along 4th Street in 1967, the neighborhood was bleak at best.  Given that the Bicentennial was coming and that the city and the National Park Service were serious about developing the Independence Mall area, some church members and others formed the Orianna Development Corporation.  The Orianna Development Corporation existed to restore and sell the row of houses on 4th Street from Cherry St. up to the store front building next to what is now the OFC office parking lot.  Numbers 129, 131, 133, 135, 137, and 139 N. 4th St. were originally constructed between 1745 and 1788.  Number 321-327 Cherry St. was constructed in 1761.  Congregation president Owen Fox eventually used the first floor of the house on the corner of 4th & Cherry as his business.  He and Nan lived on the 3rd floor and rented the 2nd floor.

Continue on Cherry St. and turn left at the end of the 129 building into an alleyway.  The building on your right was the German schoolhouse for Zion Lutheran Church.  At the end of the alley is a mosaic placed there by the Orianna Development Corporation in compliance with a city ordinance that a certain percentage of the cost of construction had to go toward public art at the site.  The mosaic depicts a pastor and a teacher against a stylized Pennsylvania German tulip.  The text reads: “This historic area contains the First German Reformed Church located on Race Street, several original houses on Fourth Street and the early school of Cherry Street.”  The mosaic is in deplorable condition.  The city knows it is there and is aware of its poor condition.  Recently a woman interested in restoring the mosaic contacted me.  Hopefully it will be restored and maintained (even though it’s not exactly beautiful), but since Old First does not own the piece, we probably have little or no say in the matter.

Speaking of the civic art requirement of the 1960’s and 1970’s…  The rectangular brick enclosure where the rose bushes and the OFC sign are was originally a fountain.  The center of the fountain featured a smallish water feature that looked like an overgrown mushroom.  It practically invited abuse.  One summer t 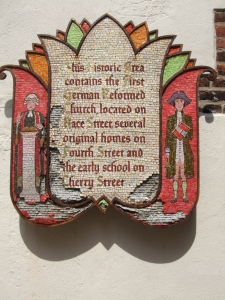