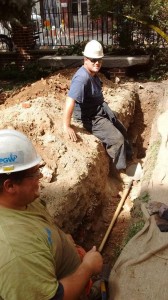 Last week, the gas line from the street to Old First was replaced. They dug down, took out the old pipe and installed a new, bigger gas line. When they were digging they found lots of old building materials, bricks, cement and two older gas lines, one that was probably more than 100 years old.

The reason the line was replaced was that it was too small to deliver sufficient gas pressure to our new boiler. While the new boiler is more efficient and uses less gas, it also has an emergency cut-off that shuts the boiler down if gas pressure drops below a certain limit.  hen the hot water heater, the stove and the ovens were all on, the gas pressure would dip, the boiler would shut off and we would come in on Sunday morning to a cold sanctuary.

Now the gas line is large enough to keep the gas pressure to the boiler up high enough to prevent a shut off. The pilot lights were re-lit Friday evening but air in the line caused them to go out during the weekend so we had no hot water on Sunday. But they returned on Wednesday and re-lit them again.  e look forward to more low gas bills thanks to the new boiler and no more cold Sunday mornings this winter.