Getting More Folks Out to Vote… for jobs and education (as an Exercise of our Faith)! 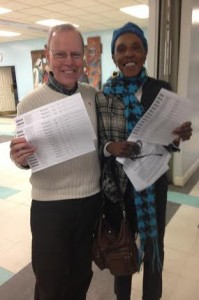 We got off to a great start last Sunday with the phone canvassing:

10 people joined Hannah for training after worship.
7 stayed and tried their hands at making the calls.
They completed 423 call attempts, and had conversations with 28 people.
(The numbers of wrong numbers and disconnected numbers and voters not at home can be discouraging. But if we remember how close many of our city and state elections are won, the numbers of unlikely voters we can move can make a big difference.)The results of our calls were interesting — with the number of unlikely voters who:
~ Support the amendment to extend 21st Century Wages = 15
~ May support extending 21st Century Wages = 9
~ Support a full, fair funding formula = 15
~ May support a full, fair funding formula = 11
~ Committed to voting on May 20 = 18
~ May vote on May 20 = 5.
4 more people took call sheets to accomplish at home, We hope collectively, they will attempt 320 more calls this week. 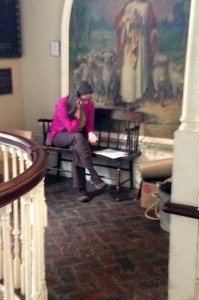 We’d like to be reaching 10% of the calls we dial, but so far we are only reaching about 6%. At the Voter Engagement Oversight Committee (which Michael is on), we decided if our canvassers want to leave a brief message on phone machines, that would be ok.
We who are working at Old First are going to — “hell or high water!” — turn out 200 people to the polls on May 20 that have in the past been “unlikely voters” …in other words, they might not have voted were it not for our prodding. And we’ll also be sending them to their polling places equipped with good information about:
~ the charter amendment that will extend Philadelphia’s 21st Century Wages for employees of subcontractors of the city.
~ how much of a difference a full and fair funding formula could be for Philadelphia schools and schools across the state. Where are our gubernatorial candidates on this issue?
We’ve got some door to door canvassing and then a big turn out the vote push the last 3 days before the election. 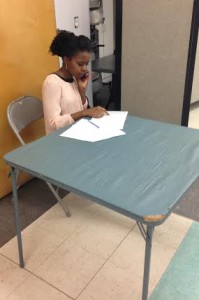 But before all that, we have calls to make. Studies have shown that we will need to make contact with 1200 people in order to raise the number of people who actually vote by 200.
Join us some Sunday. Hannah can explain it all in a few minutes. And the camaraderie of us all trying to reach and connect with these unlikely voters turns out to be fun. And the conversations when you finally talk with an unlikely voter can be good as well.
When you combine our efforts with those of the other POWER congregations that are also involved, we could make a big difference in the turn-out of “jobs and education voters” in the upcoming elections.
This could really make a difference in our city and in our state, and is some of the farthest reaching work we are doing right now at Old First. We hope you will join us and help out…
Hannah C.
Carrie K.
Clark D.