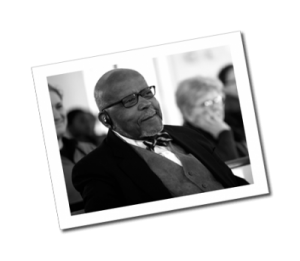 For Michael’s first Sunday away, August 4, OF member, the Rev. Robert Polk, will be the guest preacher. He will be officiating at communion as well, and the Elders will help serve.

Bob spent most of his ministry serving young people. He worked with youth at a Young Men’s Christian Association (YMCA) in Minot, North Dakota, Riverside Church in New York, and Dillard University in New Orleans, Louisiana.

Polk, son of Tillman P. and Lillie B. was born May 8, 1928, in Chicago, Illinois. After his early education in the public schools of Chicago, Polk attended UCC-related Doane College in Crete, Nebraska where he earned his bachelor’s of liberal arts and later received an honorary doctorate of divinity.

He received his masters of divinity degree from Hartford Theological Seminary in Hartford, Connecticut. In 1955, he was ordained to Christian Ministry in his hometown church of Lincoln Memorial Congregational, and became the pastor at First Congregational Church in Berthold, North Dakota (1955-1957), an all-white parish. He was one of less than 50 African Americans in North Dakota at the time. He also served as the Youth Program Secretary (1957-1960) at the Young Men’s Christian Association in Minot, North Dakota where he was responsible for the administration, coordination and supervision of all services and program for young people ages 9-18. In this position, he conducted seminars on racism and he lectured and preached throughout the community.

In 1960, Polk was called to New York to serve as the Minister to Youth at the Riverside Church for six years. In this post, he ministered to junior and high school students enrolled in the church’s Christian Education Program, supervised the church’s Sunday School and youth fellowship for over 200 young people ages 12-19, and developed curricula, seminars and workshops. He worked directly with young people and their families by providing counseling and career guidance.

In 1966, he was appointed Dean of the Chapel and Acting Dean of Students at Dillard University where he was in charge of developing programs, counseling, nurturing, disciplining and dialoging with students and staff.

He returned to Riverside Church in 1969 and served as the Minister of Urban Affairs 1969-1976 where he worked for a variety of small and medium size community organizations with their boards of directors, raised funds for national campaigns and special church drives, researched and evaluated grant programs, and developed task force and committees related to critical social issues, and acted as a staff liaison to various church programs.During his tenure at Riverside, Polk established the Black Christian Caucus; the First Black Arts Festival for church and community (1970); the Prison Task Force following the Attica Riots (1972); Martin Luther King, Jr. Annual Memorial Services (1969); and the Fund for Social Justice.

He also served as the Executive Director of Edwin Gould Services for Children, and participated with the Make a Difference Campaign for the United Church of Christ in Cleveland, Ohio.

Upon his retirement in 1997, Polk acted as the Vice President of External Relations and Public Information at the City College of New York (CUNY); as Associate General Secretary of National Council of Churches of Christ; and as interim pastor at First Congregational Church in New Fairfield and Washington, CT.

He has served on numerous boards and committees including the New York Urban League, Alvin Ailey American Dance Theater, Albert Schweitzer Fellowship, We Care, NYC Foster Care and Adoption Committee, Minority Task Force on AIDS, Newark Boys Choir, Hale House, the Partnership for the Homeless, and the Board of Trustees of CUNY.

In 2008, he published, Tight Little Island: Chicago’s West Woodlawn Neighborhood,1900-1950 in the Words of its Inhabitants. He is currently working on an other book, his memoir.