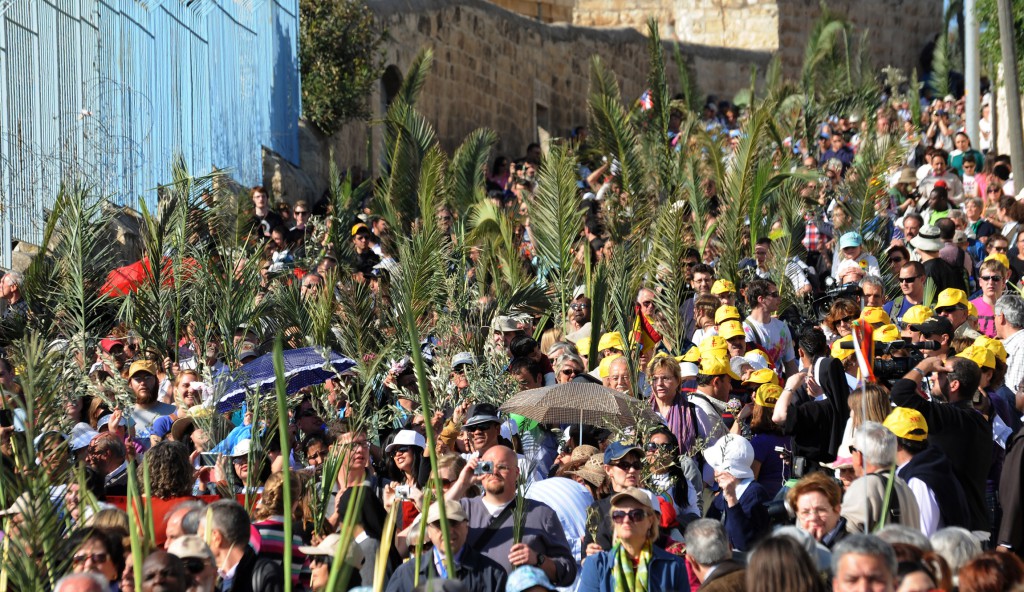 Those of us who took part in the 7 Lenten Sunday Suppers OF members hosted in their homes worked with a UCC Lenten resource on immigrants and people who are undocumented. (And as a congregation, we will be thinking more about these issues on April 30, when after worship, Blanca Pacheco will be talking to us about how congregations can be involved in the New Sanctuary Movement.) Borrowing from one of the UCC Lenten resource’s reflections, I want to ask us to prepare for this coming week’s Palm Sunday.

Jesus chose to enter the capitol city as something other than a conquering King. He did not enter through the Joppa Gate like the Roman Imperial forces. Rather he came in from the other side of the city, through the East Gate. Not in a show of majesty and power. But rather arriving into the confines of the Temple, as a humble stranger, riding a donkey. Like any peasant might arrive in Jerusalem on pilgrimage.

But he’s also styling himself as someone special. The Messiah was expected to come down the slope from the Mt. Of Olives and across the Kidron Valley from the East. But he is a different kind of royal, not a worldly power, but a Prince of Peace. He’s been headed to Jerusalem for sometime in his ministry. Even at his arrival in his Jerusalem he clearly knows this visit will be his undoing at the hands of the authorities.  But he is still walking and teaching people his way. He doesn’t detour, but heads straight towards his appointed end, true to himself, his way and his God.

But here’s what I want you to see: Jesus enters Jerusalem in such a way as to teach the city and its inhabitants to welcome the stranger or even celebrate the newcomer. He is still teaching an openness to how others can be a blessing to us.

He apparently offers a good lesson: they spread cloaks and branches across the road to make the way smooth for him.

Have we learned what he would teach us? Have we made welcoming people with open arms and giving them sanctuary our faithful commitment? We’re talking about a spiritual disciple, a way we can learn to walk with Jesus. What will come to be known as Christian hospitality, but traces at least as far back as Abraham and Sarah entertaining angels unaware in order that they might hear the promises of God. And what a week after that first Palm Sunday, Cleopas and his companion practice on the road to Emmaus that becomes their occasion for receiving the risen Christ.

Old First is doing well these days welcoming the newcomers who come through our doors. A number of recent visitors have remarked on how they were received warmly. You’re doing so well that I want to challenge us to grow our hospitality the next step. Take it through those doors and out into the world. I want us to push our loving welcome out beyond our four walls were hospitality becomes invitation.

Here’s your assignment, as preparation for both Palm Sunday and Easter: Please reach out to two people to invite them to church —

1) The first one can be someone who’s a part of our community, someone you haven’t seen around for awhile. (If you needs a suggestion, I can help!) Contact the person and check on them and ask them to join us for the Holy Days.

2) The second person should be someone outside our circle, but not outside yours. Think of friend or family or neighbor, someone who might have an interest being in church for a special, holy day. And invite them to come with you. Even offer to pick them up and bring them with you.

And once you have some practice inviting 2 people for Palm Sunday, do it again next week for Easter.

You don’t have to be able to explain the whole faith or even what happens on Calvary or at the empty tomb to invite someone! Often, “Would you like to come with me to church?” is the rich invitation — meaningful in more ways than you can know — that the other person needs.

I will thank you in advance for those who you invite.  And God thanks us by making the act of invitation a self-fulfilling blessing — not just those who are welcomed, but those who are given the honor of welcoming.

See you in church (Jerusalem!),