Have you noticed that Old First has two cornerstones?  The older one is in the lower narthex under the west window and reads: 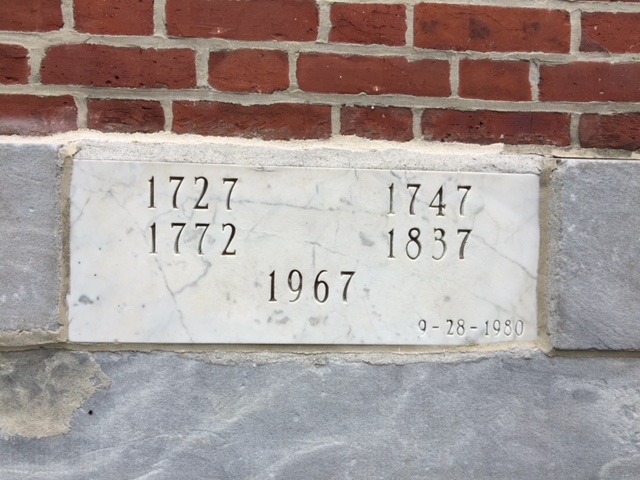 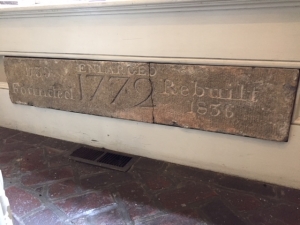 Have you noticed that Old First has two cornerstones?  The older one is in the lower narthex under the west window and reads:

The newer one is outside on the front northwest corner of the church and reads:

And there were others.  In 1762, then pastor Rev. Frederick Rothenbuhler led a group of disgruntled congregants in seceding from Old First (the hexagonal building) to build St. George’s Reformed Church a block and a half away.  Unable to pay the construction costs, Rothenbuhler was thrown in debtors’ prison for a time.  Still unable to pay the construction costs, the group tried to sell the church.  It may or may not be true that Rothenbuehler et al named the church St. George’s in an attempt to persuade the Anglicans/Episcopalians to purchase it.  In the end, the Methodists bought the building in a sheriff’s sale and reorganized the church as St. George’s Methodist Episcopal Church making it the oldest Methodist Church in the United States. Below is a (1920’s?) lantern slide image of the original German cornerstone of St. George’s.  It reads: This high German (St.) George Church built 1762. 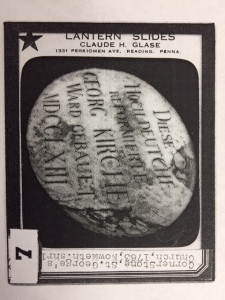 Cornerstones are inherently optimistic objects.  Their presence is witness to the people or entity for whom the structure was built.  They are messages from people at one point in time to people in the future.  Our 1836 cornerstone was laid with great fanfare on June 16, 1836.  In the cornerstone laying address, frank mention is made for why a new building was needed.  “This building [the 1772 church] formed of the most durable materials, sufficient spacious to accommodate all who sought a lodgment within its walls failed to secure the attendance of many of those whose fathers exulted when its massive walls were raised…We were left either to let it remain as it was, the absence of worshippers, or, rear in its stead an Edifice that might meet the wishes and secure the growth of the present congregation.”  Thus, it was hoped a more modern building would increase attendance.

The cornerstone laying of the church at 10th & Wallace in 1883 was likewise an event.  In that cornerstone were deposited a Bible; a hymnbook; a Heidelberg Catechism; the names of the Board of Corporation, members, Sunday school teachers and students, the Missionary Society, etc.; a copy of the last sermon preached at 4th & Race (1882); Rev. Berg’s “Christian Landmarks”; Rev. Bomberger’s “Five Years at the Old Race Street Church”; Rev. Van Horne’s “History of the Reformed Church in Philadelphia”; the charter and by-laws of the Board of Corporation; the Messenger from July 11, 1883; copies of the Reformed “Hausfreund”, Kirchen-Zeitung, The Child’s Treasury, the 1883 Almanac of the Reformed Church, a copy of the Public Ledger; an engraving of the 4th & Race St. church; and a copy of the program for the cornerstone laying.  The contents of the cornerstone are indicative of the fact that the pastor, Rev. David Van Horne, was a student of German Reformed Church history.

The cornerstone for 50th & Locust was laid September 16, 1917.  The contents were similarly as many and as varied as those in the 1883 cornerstone.  Dr. Charles E. Schaeffer, after whom our front garden is named, presided at the cornerstone laying because pastor Appenzeller was ill.  The inscription on the cornerstone recorded the dates 1727 and 1917.  I do not know if the contents of that cornerstone were ever retrieved.

The return to and restoration of the church at 4th & Race led to the retrieval and opening of the 1836 cornerstone.   Inside the cornerstone was a lead box.  The inscription on the lid of the box is very faint but indicates that it was soldered shut June 13, 1836. 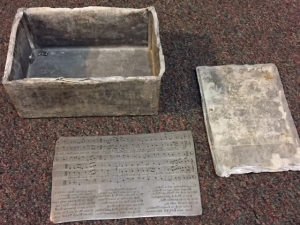 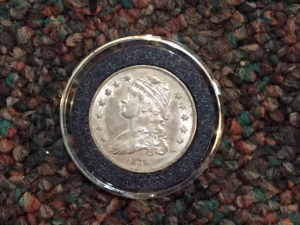 What was found inside?

-A small red leather-bound book of Psalms and Hymns for the Use of the German Reformed Church in the United States of America printed in Philadelphia in 1834. 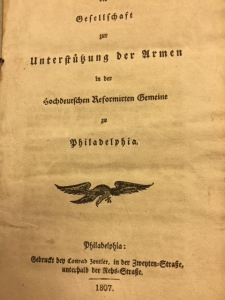 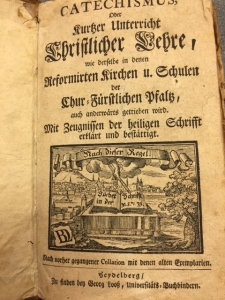 -Catechismus; Catechism in German for use in High German churches and schools.  Printed in Heildelberg, Germany in 1684 and probably brought to Philadelphia by an early congregation member.

-Address given at the cornerstone laying.

-Dedication document with names of dignitaries of the period and the names of church officers.  This is likely the scroll mentioned in the June 19, 1968minutes of the Trustees as having been found in the cornerstone and conserved underplexiglass.

The people gathered at the cornerstone laying ceremonies for each of our buildings had faith that people (in some iteration of their Reformed Church) would be present to acknowledge them and their witness.  We are and we do.