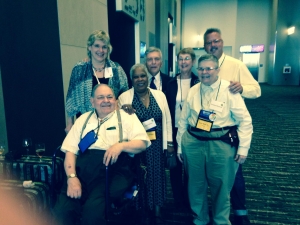 Some take-aways from the UCC’s General Synod last week that might bear importance for our ministry at Old First (in no particular order!):

~ That there were not yet bees in Palestine / Israel during the times of the Hebrew Scriptures, so that “honey,” when it appears in our Bible, is a loose translation to make sense to us in our very different context. God’s promise was of “a land of milk and date oil!!”

~ That I know a lot of people in the wider church and, more importantly, that those relationships and “the container” of that community, maybe even of that institution, account for much of the good I have known in my life. I wonder if the local church doesn’t function similarly for many of you?

~ That if I broke the bread and lifted the cup… and blessed the meal after and separately from the words of institution during communion, it might point to Christ’s presence with us now, rather than only suggesting that we remember way back when. (How’d I miss that for the first 25 years of ministry?)

~ That in these secular days when being and doing church feels hard pressed, put upon, even an uphill battle, there’s some real need for some cheerleading, self-esteem building and a bigger context / perspective from which we can see ourselves and our situation in a more favorable light. That said, there’s a very fine and crucial distinction between helpful boosterism and dangerous hubris.

~ That even with 3000+ people, in a convention hall setting that wasn’t very conducive to feeling one was “at church,” the most moving and effective moments of Synod worship were the contemplative aspects.

~ That more people than you can imagine take on the conventioneers’s spirit and quicker than you can figure out how, collect and don every button, ribbon, sash, stole and t-shirt for the causes they support. They remain so bedecked all over town, late into the night, and to the bitter end of Synod. I imagine the TSA at Cleveland airport must have had a tough time getting some of us to our flights home with all those buttons on our blouses, hats and bags!

~ That many of our neighboring UCC churches in and around Philadelphia are planning to sell their buildings in order to “find” capital to fund the continuation of their operations. It’s uncomfortable for me that in the city where the German Reform Church was born there might hardly be left even a handful of our church buildings. It worries me even more that so many of our sister congregations are working in “last one out, shut off the lights” mode. Without so much as asking HOW or IF they need to change in order not to just exhaust their final liquidized assets… And without asking whether or not, going forward, there might be some other more faithful way to use the resources entrusted in their buildings by earlier generations?In other words, their understood goal is mostly “being as much as possible how we have always been, for as long as we can, until we go out of existence.”. (It seems that wider settings of the church — Conferences, even the national setting — sometimes share a similar hopeless tunnel vision and lack of holy imagination.)

~ That we always surprise the wait staff in whatever city where we meet for Synod: for a church group, we sure fill up the bars.

~ That there are greater cultural differences between the Congregational, Reformed, Christian and Evangelical streams within our church than we acknowledge or are even aware of (except that almost all of us are comfortable meeting for a drink after a long day of Synod!) And that’s not even including the Christian Church / Disciples of Christ who we”d better start sharing more with or the United Church of Canada who we just struck up full communion with,

~ That young adults are surprisingly willing to make room for their leaders to lead. They do not seem to have the reflexive suspicion of authority that those of us soured by the Vietnam War and Watergate often have. However, this new youthful trust in leadership is predicated on leaders’ trying new ways to get us pragmatically past what isn’t working and where we are stuck. Young people seem to be willing to take a chance and try something new — with a deep faith that if it doesn’t succeed, they can try something else.

~ That “covenant” mutuality is central to who and how we understand ourselves as church. But there are times when covenant translates poorly to “we have known inequality and injustice, even tyranny, and they leave us so afraid that someone might have more power and say than us — and subjugate us! — that we are willing to bear ineffective structures, low accountability, even paralysis, rather than risk leadership that could move us ahead and help us become more mission ally what we are meant to be.”

~ That our Pastor Emerita Geneva Butz can get downright silly — and VERY funny — sometimes.

~ That 1% of the 700+ delegates were at the microphone most of the time (ok, that may be a bit of an exaggeration, but just barely…) — as if they worry that God may not be able to work through the others. How much more creative could we be if our process and community engaged and involved a greater percentage or number of people?

~ That we can say out loud and without apology — even proudly — that we are Christians who put social and political responsibility before personal piety as expressions of our faith.

It’s a challenge being UCC! But I think it’s worthwhile and rewarding enough to keep trying…

Come out and support Wanda preaching this Sunday,
And I will see you in church on the 12th,