How a Breakfast Team Was Born 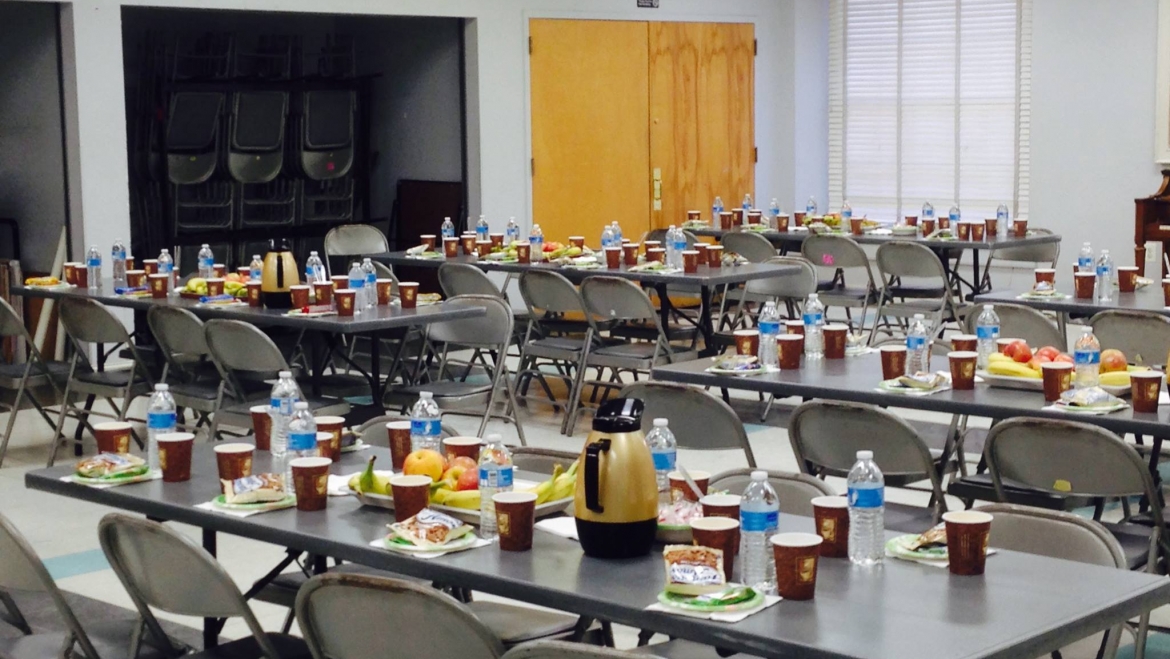 When I came to Old First in February of 2011, the first volunteer group I met was an adult group from Ottsville, PA. I did not know where Ottsville was and was very surprised that there were no children in the group. A small group of women came down to Old First to stay overnight, make dinner, and help at the Cupboard. The interesting fact about this particular Saturday was that it was a Saturday of transition. Not only was I starting this position mid-season, but the Cupboard was also in transition.

I recently asked the crew formerly from St. Luke’s UCC Ottsville (I will get to that) how they came to volunteer here at Old First. This group is not solely from the church in Ottsville, but is a mix of people who met in our courtyard, through friends who did attend Ottsville, and anyone they drug along in the process. Apparently, there was a race that a few of the women would sign up for. One year they didn’t complete the run due to weather and instead heard about Old First. One person asked “do you think they would like coffee and donuts?” and that was how history was made. For almost fifteen years these women have been bringing food once a month to serve at our Cupboard.

Prior to my first week, the Cupboard was held in the Christian Education building in the room closest to 4th Street. If you have been in there for Sunday School, you know it is a tight space. All of the clothing donations were stuffed in there and 2-3 volunteers would be on hand to distribute the clothes to anyone who showed up. The people who showed up didn’t have much choice other than telling the volunteers their size. Those who volunteered talk about the intimate relationships between the guests and themselves because the space was so small and we had so little to offer. On occasion this group from Ottsville would come down and bring coffee and pastries to share with the men in the courtyard. Items were served outside and everyone was happy. An older fellow named Gus also picked up Panera leftovers and would distribute those in the courtyard when he came into the city.

By moving the Cupboard to a larger space, we realized there was room to cook. Gus was setting up pastries near the chairs and other volunteers were putting out fruit on the tables. Like a light bulb, we realized that we could actually cook a meal instead of serving pastries. The next time the Ottsville crew was planning to come down, they brought griddles and the fixings. This is how a breakfast was born. The 6-7 women made pancakes and sausage and served with fruit, coffee, juice, and even homemade pastries. The same core group has remained together serving for the last ten years. One member had health issues and hasn’t made it down in several years. Another recently accepted a job that took her away from St. Luke’s UCC. During their last breakfast, two of the head cooks asked if they could change their group name. I couldn’t think of what we could call them to identify them as “formerly” St. Luke’s UCC Ottsville. They picked the name Sister to Sister to acknowledge their bond together that was formed so long ago in our courtyard. Many friendships and relationships hang on by a string but these women are dedicated and love serving at the Cupboard. They are one of my favorite groups to host and I know the guests love having them. They often bring portioned shampoo and conditioner for the guys, offer to assist with letter writing, meet special needs or requests, and partner with us to collect donations annually. If ever there were a group who “made” the Cupboard happen, it would be this wonderful group. We are excited that they will continue their ministry with us despite changes in their attendees and look forward to the hope and happiness they share with the folks at the Cupboard.