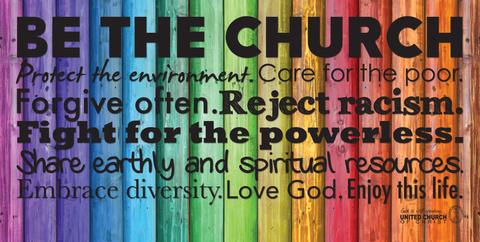 As well as preaching at Ogle Presbyterian Church on this coming Reformation Sunday, I have another assignment while I am in Guyana. I am at the Caribbean and North American Area Council of the World Communion of Reformed Churches (interestingly, the largest association of Protestant churches; in fact bigger than the world Lutheran or Anglican federations). We are meeting in Georgetown, Guyana.

My other assignment is to speak as one of three people on a plenary panel about sexualities, family and the role of the church. It’s not easy to speak about sexuality in the church (or any other topic) when the various churches do not agree on how they understand or respond to what many find an uncomfortable reality.

It’s my understanding that many queer people in the Caribbean context are closeted because it might not be physically safe to be out and proud. And in some cases, the church shares the threatening and condemnatory stance. In others instances, the church has simply been silent over against the prejudice and discrimination in society.

As a UCC leader, it is not surprisingly my task to speak in favor of the full and respectful inclusion of LGBT+ folk in the church and the need for the church to become in society an advocate for justice for queer people. So I have been thinking and praying about how to speak about all this with sisters and brothers who are not going to see these topics the same way or agree with me.

There is one more wrinkle to all this. As a Euro-American leader from the U.S., I also have to contend with the realities of colonialism. I don’t want to come off as big white brother from the North telling my younger, darker neighbors in the South what is really right, what Christian faith really means, or how they should act. Still, I do feel some obligation to queer sisters and brothers in societies where they feel and / or are endangered. It’s not an easy assignment.

Today, I will be visiting a justice advocacy group for Lesbians here in Georgetown. Hopefully, I will learn more. But so far, I have come up with two approaches for my presentation.

I am going to begin by acknowledging that we are engaging a difficult topic in the church that people have very strong beliefs about. And on those strong beliefs hang a whole host of other, related, even dependent theological and ecclesial claims. On the one side, there are advocates for queer folks who want to see the church use its power to expand the freedoms, increase the safety, and develop respect for LGBT+ folks. On the other side, there are defenders of tradition who see any revision of the church’s stance on “alternative sexualities” as a threat to the authority of the church, the understanding of Scripture and how the world around it sees the church. Acknowledging from the beginning both sides, and their involvement in the issues and what they fear they might lose, I hope to sidestep the partisan divide – the us against them dichotomy – the winner and loser outcomes that so often characterize these discussions.

2. Tell my colleagues about the grace of UCC polity wherein we speak to one another instead of for one another.

Back in 2005, when the UCC’s General Synod passed a resolution in favor of our churches performing same-gender-loving weddings and advocating in our society for the legal redefinition of marriage to include same sex couples, we made the national news. I was still at the General Synod in Atlanta, but the phone calls had begun. I was the Regional Minister in the NYC Metro area, and churches were concerned, upset, threatening to leave the denomination.

Mostly, people were shying away from the news coverage which they experienced as notoriety. What were other Christians and even their secular neighbors going to think? Interestingly, a number of ONA congregations were worried about marriage, already an institution in contemporary America that was struggling, even faltering. Would this redefinition further undercut traditional marriage? And there were a few congregations who felt General Synod’s action contravened Biblical teaching.

I began reminding people about our polity. How we are a covenantal church of autonomous parts. How we believe that, in any setting of the church where 2 or 3 are gathered, Jesus is present, and as such, that body is free to make any decisions it feels God through the Spirit calling it to.

In this case, the General Synod did what it thought right and what it was in its right to do. But, likewise, our local churches were now free to take the General Synod pronouncement and respond as they together with Jesus felt God wanted them to. They could embrace gay marriage. They could simply decide the pronouncement wasn’t relevant to their ministry. Or they could continue to teach homosexuality was wrong according to the Bible.

In other words, our General Synod does not dictate to our churches. It doesn’t even speak for our churches. Rather, it speaks to our churches. And covenantally, they are to listen in all honesty and openness and decide for themselves what God’s will is for them.

I wrote a piece, that got picked up by the denomination, about how General Synod pronouncements are like the letters of Paul before they had been recognized and included in the canon of Holy Scripture. Time itself and the reception of local churches would determine the lasting power and net effect of any General Synod resolution.

My point is simply that, as the church, we need to listen to one another and be open to how we challenge and affirm and contradict one another as together we contribute to a journey that is bigger than any or even all of us.

As the church, we should be able to talk about even the tough topics for our mutual enrichment, even if we don’t come to an agreement. None of us can claim perfect certainty of the will of God, but we need everyone’s participation to get as close as possible! (That almost sounds like an appeal to get out the vote on Nov. 6!)

Keep me in your prayers during the plenary Saturday afternoon!

You will see Bob Robinson in church this Reformation Sunday (performing his first ever baptism for Rose Waddell!), but I will see you in church, I hope, next week, on Sunday, Nov. 4, when we celebrate All Saints Sunday!