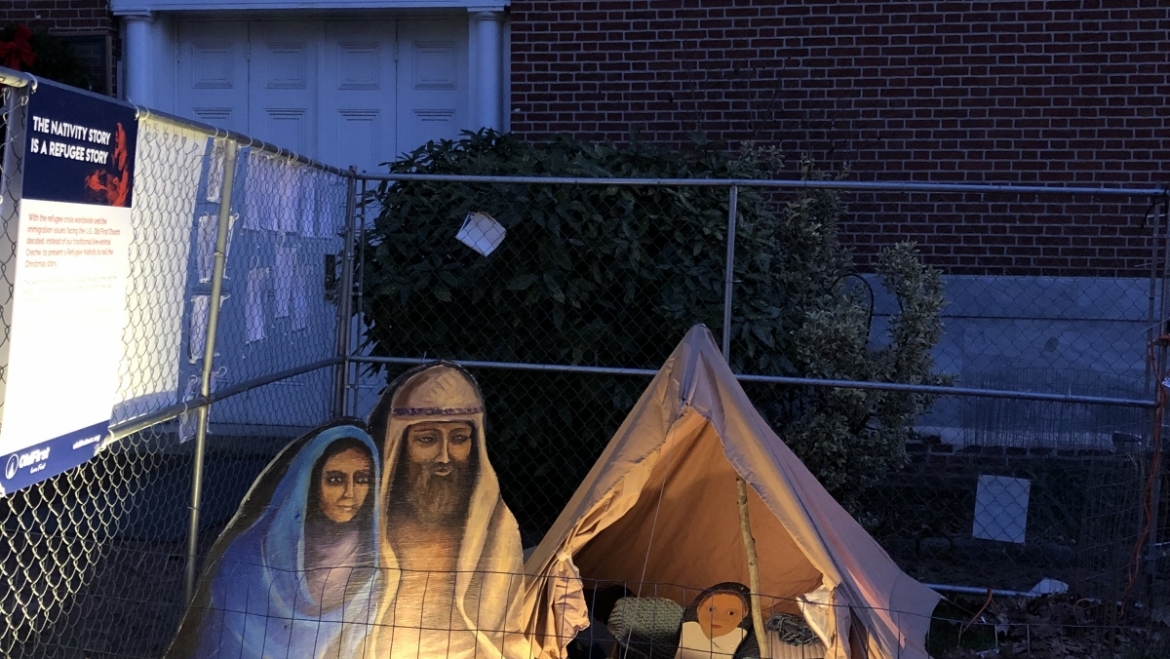 Some conservative Christians are mad about our Refugee Nativity. They might be about to get madder.

After the T.V. and radio stories, they called the church. They have complained on our Facebook page and in the comments under the news reports. Their concerns have not always been the same. One guy wanted to have a full-fledged theological debate with me in front of the refugee tent while Mary, Joseph and baby Jesus watched. There was also a threat to burn the Refugee Nativity.

Some insist — despite Matthew 2? — that the Holy Family was never refugees. Others, making our own Ian Mc. laugh out loud, cannot believe that the church is worried about people beyond our borders when we should be helping the homeless on our doorstep.

But from what I can make out, the most recurrent complaint has been that it is disrespectful to compare the Christ child and his family’s homelessness, poverty and exposure to any real people or real life situations. That they are foreigners seems to add insult to injury.  “That’s disrespectful,” it seems, for certain Christians. One man wrote, “You have bastardized the Christmas story” (Suzanne admitted that she wanted to reply, “Isn’t that a major part of the story, that Jesus is born in some sense a bastard?” but she thought it better not to antagonize someone already upset!)  “Christmas is only about Christ,” was the disapproving explanation that emerged.

Can you see the irony in Christians spiritualizing God’s great incarnational act to the point that it is no longer more than ethereal dogma or a holy tale?

But for progressive Christians — for us — receiving Christ at Christmas is not only about long ago. For Christmas to be significant… to be about anything at all, it has to be also about our world today. It has to make a difference in the here and now. Christmas challenges us in our understanding of the faith to share the Love of God in concrete, practical, transformative acts… particularly for the most vulnerable, like the Christ child himself.

So, this Christmas, Old First used the idiom of the world’s refugee crisis to make Christmas real in our time and place. And it turns out that we are going to continue and build on that idiom in the 5 pm Christmas Eve Service.

This past week, I was approached by Ray Torres, a member of the Sanctuary Committee at First UMC of Germantown and a member of the Sanctuary Movement. (Ray worked with Geneva way back on human rights issues, and also knows the Seminary professor of mine who preached my ordination!) Ray asked if we would consider including ICE agents as part of the service where Mary and Joseph travel through the neighborhood looking for room at the inn.

I like it: it’s advocacy for undocumented neighbors in this country as well as for Central American neighbors knocking at our southern border. Including ICA agents will reference how in current U.S. political circles and from government leaders we keep hearing “there’s no room at the inn” for the various immigrant and refugee people looking for a safety and a home here.  After the congregation voted in October to fence in the Holy Family as a protest against government immigration policies, I believe we can artfully add this encounter with ICE to the processional part of the 5 pm service; it will be an appropriate interpretation and application of the sacred story, both making justice and spiritual statements.

I don’t know how many of you actually know the 5 pm Christmas Eve Service that we have done for the last 5 or 6 years. It’s the service at which we welcome more guests than any other time of the year. In fact, it’s usually mostly guests. (Most of our “regulars,” the OFers have, traditionally, opted for the 8 pm Candlelight Service.)

The 5 pm outdoor, family service begins following Mary, Joseph and their donkey around Old City looking for “room at the inn.” This practice borrows from a Mexican tradition called “Las Posadas,” referring to the “lodging” or “accommodation” that Mary and Joseph are seeking.

With gathered worshipers along, Mary and Joseph and their donkey visit pre-arranged families in the blocks around Old First, looking for a place to stay. Each time someone opens a door, the crowd “Occupy-style” shouts “Is there room at the inn?” When neighbors cannot offer the displaced, homeless couple shelter, the assembled crowd sings the family Christmas Carols and wishes them Merry Christmas nonetheless.

After the family visits, as the congregation makes its way back to church, Jesus’ parents Mary and Joseph will be confronted and questioned by agents from US Immigration Customs Enforcement (ICE).

The mock ICE agents will approach Mary and Joseph along Race Street, and announce that they have heard there are illegal Middle Easterners in the neighborhood. Mary and Joseph will admit they are undocumented. A leader from the church will remind the ICE officers that the government has not… to date… taken into custody or deported people who have been offered sanctuary by a faith community. The leader will ask the congregation, “Will we offer Mary and Joseph sanctuary for their safety?” After the crowd affirms their protection of the Holy Family, the congregation will, as its custom, sing the ICE agents a Christmas carol.

The service will continue from there as it has in years past… The Holy Family will knock on the church door (this year the door to the Sanctuary building, asking the Innkeeper if there is room. Harried and with a full-house, he will slam the door in their faces. But with Joseph’s persistent knocking, the Innkeeper will relent, “there’s a refugee tent over there where you could stay.”.

…From there, the rest of the Christmas story will unfold as it always has at the outdoor service. The baby is born (or brought to his/her mother by an angel!), the Shepherds come from the fields, the Wise Ones arrive from distant lands, and the service ends by everyone passing the Peace of God and wishing each other a Merry Christmas.

This year Mary will be Jillian Waldman and Joseph will be Michael Noda, and their daughter Sasha will be Jesus. (The donkey will be played by a donkey, again from the 4-H club at Saul Agricultural High School.)

As you think about all this, consider the the timing of the vignette with the ICE agents: sandwiched between the homes that had no room and the inn where there is no room… making the immediate connection to ICE agents who are part of the system telling refugees we have no room.

As a refugee tent is to a stable, an ICE agent is to the Innkeeper.

See you at church,