Introducing Hartmut, Katleen and Malin, our guests in August 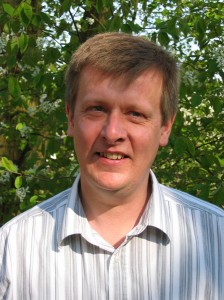 Hartmut Brünger is the pastor of our sister congregation, the Markusgemeinde (St. Mark’s) in Bielefeld, Germany. He’s 53 and has served that congregation for 23 years.

Harmut will be visiting Philadelphia for 3 weeks in August (8.8 to 8.26) while he and Michael do a pulpit exchange. (Yes, that means you need to come to church on Aug. 11, 18, and 25 to support our visiting preacher as he sermonizes in English… And keep Michael in your prayers as he is in Bielefeld sermonizing in German those same Sundays!)

Hartmut be accompanied to Philly by his wife Katleen Eickmeier-Brünger, who is a gradeschool teacher, and their 15 year old daughter Malin. Their other children, Timm (23), Jannis (21) and Nils (19) will be back in Bielefeld.

Both Harmut and Katleen come from an ancient town, founded before 789 C.E. about 16 miles outside of Bielefeld. (William Penn visited Hereford once!) But now they’ve been in Bielefeld for 25 years.

As a pastor, Harmut finds it difficult to say what he loves most about his ministry. He likes being with people and enjoys how everyone is unique. He also likes that serving as a pastor, every day brings something new, and therein he finds himself thankful to get to know life differently day by day. He counts it a pleasure to be able to bring Christ’s light to our world’s darkness. His heart is deeply with the christian education efforts with youth and for that reason, he has sought out additional training that he might be as effective as possible.

The Markusgemeinde is a member of the Evangelische Kirche (the Protestant Church) in Germany. In some ways they are very much like us in the UCC, but Michael always finds it most interesting where we are different, for example how we look at membership / participation or how we do stewardship.

The Markusgemeinde is proud of its openness: young and old together, learning from one another in one church community. Their motto is “common life — experiencing community.” They are also a congregation that likes celebrate and commemorate.

For Harmut, the Markusgemeinde-Old First partnership is very important. “For 20 years, we have accompanied each other in giving thanks. We’ve lived through some significant changes in both congregations.” He remembers fondly joining us for the celebration of Old First’s 275th anniversary.

It’s interesting to Hartmut how differently the German and American churches are organized and in that difference, he believes we have much to learn from one another. Despite our differences, however, he finds that most deeply– in German one says “with our hearts” — we are very similar, near to one another, already neighbors.

Hartmut hopes that our pulpit exchange this August will open a new chapter for the partnership. And he says that folks in Bielefeld who met Michael when he accompanied the Old First youth in 2010 are looking forward to welcoming him back.

Michael expects that in his absence Old First folks will reach out and welcome the Brünger family. While he hopes that in between Sundays, they mostly have time off to sightsee Philly and maybe D.C. and NYC and Lancaster… he also hopes they will get a chance to spend time with our people. That they might get to know Old First better and we, through them, get to know the Markusgemeinde better. It’s an opportunity to experience how we are one church across national boundaries. But it’s also an opportunity to figure out where and how the partnership can be most fruitful for both congregations.

Please feel free to reach out to the Brüngers (you can do so via the church office) to welcome and maybe even invite them to things they might not otherwise experience… a barbecue or the Mutter Museum! For example, the Elders are planning to invite them out for a “working dinner” to begin discussing how to strengthen and make more of the partnership…