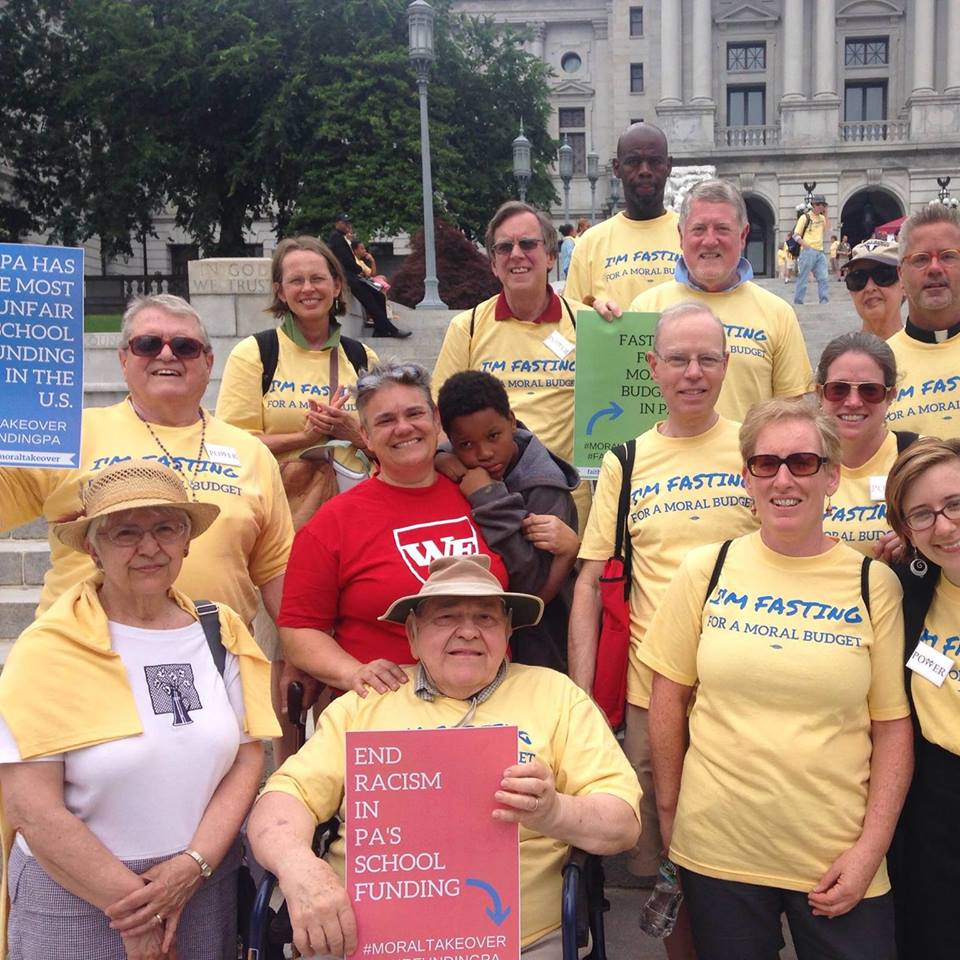 One of Michael’s favorite organizing memories in recent years was from June 2015, a favorite because it involved a bunch of Old Firsters.

Michael had responsible for organizing the UCC Clergy Day at POWER’S “Camping Out” Protest on the Capitol Steps in Harrisburg on Monday, June 20. Actually, it was called “A Moral Takeover of Harrisburg,“ and we intended to have a presence for 10 days on the capitol steps demanding for a full, fair funding formula that would provide our schools and families the support we need for our children.

For the UCC Clergy Day, Michael’s colleagues had not disappointed — they had turned out in good numbers, and they had a good time together, as well as making some noise about students and families’ needs for full, fair funding.for public education across Pennsylvania.

Michael was staying over in Harrisburg to participate in the protest for a second day. His original idea had been to stay in Harrisburg for the full 10 days — sleeping nights with a team of others in the Methodist Church downtown —  to insist legislators have to face up to how a full, fair funding formula was needed. But when the “Moral Takeover” finally got scheduled, it mostly overlapped with the UCC’s General Synod, at which Michael’s friend and colleague was retiring as General Minister and President. Michael only had one more day to participate until he had to head out to Cleveland.

And on Tuesday, June 21, Michael’s second and last day of protest, just as things got going on the capitol steps, unbeknownst to and unexpected by Michael, a whole cast and crew from Old Firsters showed up for join in the demands

It got even better. We decided to interrupt a session of the legislature, to demand their attention, that they hear our voices —  that public education in this state be funded completely and justly. This involved sneaking our banner past security and positioning ourselves in the gallery above the legislature involved in business. Geneva was tapped to hide the banner in her bag. We all made it in and were sitting in a row. People were nervous that we might get arrested (only if we refused to leave when we were told to stop our protest, which we were not planning — we just needed to get noticed!).

At the appointed time, we stood up quickly, made our way to the edge of the balcony, unfurled our banner and began chanting. Below us the legislative session stopped and turned around. The liberals clapped at our effort; the conservatives looked annoyed. A capital security rushed us, grabbed our banner and ushered us out of the gallery. We — regular citizens in Harrisburg to be heard by our legislators — were pretty proud of ourselves: we had made a statement on this day of the protest that no one in the Capitol could miss.

Folks, it’s time to go back to Harrisburg. No dangerous protests this time. Instead, a mass rally, filling to capitol rotunda with 1000+ Pennsylvanians who show up to insist that the fair funding formula (THAT WE HAVE WON!) be extended… applied to all education funding, instead of just the new dollars going to education. Ok, that’s the specific goal of the protest on June 12, but before we get there, do you wonder if these sorts of actions make a difference?

In 2012, POWER’s Leadership Assembly ratified an organizing agenda that included launching a campaign to push for policies that would create great schools throughout the Commonwealth. During 2013 and 2014, listening and organizing efforts led to the development of a Fair Funding Campaign, designed to create greater equity in how state funds are applied across all 500 districts.

While some Pennsylvania students go to public schools that are among the best in the nation, too many of our students lack access to quality education. This inequity is caused in great part by inadequate state funding, which covers only 35% of total costs (compared to 50% on average in states around the country). This leaves local districts to make up the rest and places low-income districts at a significant disadvantage.

Further research conducted by POWER has revealed deep and persistent racial disparities in the way the state’s Basic Education Funding is distributed to the 500 school districts across Pennsylvania.

In 2014, POWER fought for public access to the hearings of the Basic Education Funding Commission. This enabled community members to have a say in a new formula for funding public schools, exposing the racial inequities in the existing approach. In June 2015, POWER amplified this effort with the “Moral Takeover of Harrisburg,” 10 days of prophetic action around educational equity that mobilized POWER clergy and congregations to travel to Harrisburg and take sustained direct action on behalf of PA’s children.

In 2015 and 2016 POWER created and began a Fair Funding Campaign to call to attention the racial disparity in the state’s education funding. Through this effort, POWER helped to drive the Basic Education Funding Commission to create a bi-partisan, Fair Funding Formula, which was signed into law by Governor Tom Wolf in June 2016.

The only problem… or our next step: currently, the Fair Funding formula is only used for new money, just 7.5% of the state basic education spending. The lion’s share of school support continues to be allocated unfairly, still divvied up by the unfair political deals of the past and resulting in persistent disparities between districts with larger numbers of students of color and predominantly white districts across the state.

We are headed back to Harrisburg on June 12 to demand that the fair funding formula apply to ALL the state’s support of public education.

Will you join us? It will take the better part of a day, but it’s been 4 years!!! Buses will be free and leaving from various places around Philly. Speak to Barbara G. or the pastor to tell them you are signing up to go / reserving a seat on the bus (and if you need more info).