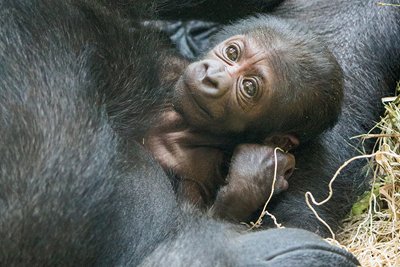 A lot of people ask me how I can be religious as a scientist. When I say that I am fairly religious with a minister father they get confused because they know how much of a science person I am. I am very into science. I am basically a pure science person, but I don’t think that science and religion are mutually exclusive. I am an animal scientist whose passion is conservation partially because I want to conserve God’s creation particularly the non-human primates because when I teach about them at the zoo there is nothing I can do but marvel at God’s creation and see how much just like us they are. I even do a just ask station called Just Like Us where I educate people about Gorillas and how they are just like us.

They do a lot of things that people do just at a different rate as humans. They cradle their babies for the first few months and then they carry their baby around on their leg like some parents will walk around with their kids on their legs. When I am at the zoo I feel like I am that much closer to God and his creation sometimes even more so than at Church because I am near a lot of his creation not just other humans and I get the opportunity to teach all about his creation.

In my view, we evolved away from a common ancestor of theirs millions of years ago to survive different things. People try to deny evolution, but you cannot really deny it without lying to yourself. Evolution is fact. Just look at people for example, some people have wisdom teeth which may grow in and cause problems which cause them to need to be removed. Without medical care those people would most likely get an infection or something and die, but some people, such as myself, never had wisdom teeth and never will because they never existed in their body, so they would never have those issues so they would never run the risk of dying from complications with them.

That is called a microevolution that occurred because of survival of the fittest which is a large part of evolution. Microevolutions happen all around you, all the time. It is how you survive. Evolution was just a huge series of microevolutions that changed a common ancestor into many different things in order to survive different environments because most microevolutions are driven by changes in environments.

Let me leave you with this– whenever you talk to someone who takes the bible literally and doesn’t believe in evolution make them think about the above and the following, without evolving nothing will ever survive and humans would have never been what they are today because they would have been all killed by changing environments. It has been as simple for animals as evolve or die, but usually they have a long time to evolve, but now because of humans they don’t have that time because we are destroying their habitats and killing them, so now we need to protect them, God’s creation, from other humans before we lose all the rest of God’s creation other than humans because we are getting there at an alarmingly fast rate.

If you wonder how you can help come to the zoo and learn about different ways such as using products with sustainable palm oil, recycling, conserving energy, etc. Only we can stop God’s creation from disappearing and we all have to be involved for it to be successful!