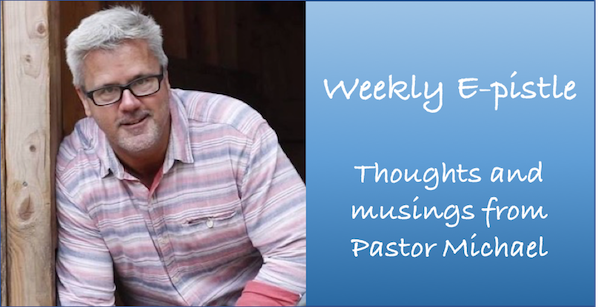 I spent the summer leading worship even more confused and fumbling than you all at Old First know me in the role! Thank God for the forgiveness of the parishioners and for help from above..

Part of the struggle was that the service was bilingual — Italian and English. I was always under the impression that I should be, if not actually translating the Italian, at least staying in the same thematic and dictional ballpark. Sometimes, I could actually do that. Italian offers a lot of cognates (particularly with Spanish), and I’ve ‘spoken church’ so long, really, I often knew what to expect. But there were also other times when I totally lost track, and in a sort of situational Pentecostalism, just went where — hopefully — the Spirit led and with what the Spirit gave me to say.

I was also lost and wandering (but still expected to lead) through some sort of in-between, no-person’s land of liturgy. Italian Protestants, influenced by the Waldensians, are very biblical. Not literalists by any means. In fact, their reading of Scripture may even come off more justice-oriented than ours in the UCC.

But Waldensians use, actually rely on, Scripture as the backbone of their liturgy, in a way I have never known. It was often interesting for me to see what biblical passages the tradition lifted up for the gathering, the confession, the biblical lesson of the day, the sermon, the offering, the prayers. (I was always told those biblical citations in advance, so I could mark my Bible and reprise in English what had just been read in Italian.) But there are seques and instructions needed in between the passages, and those felt different and sometimes onerous as I navigated through all that Scripture. Truth be told, I think I worried more than the Italians, about making a flowing, coherent narrative out of the hopscotch of Biblical texts!

There was one more way that worship at La Noce, although it fed my soul deeply, could be a bit disorienting. (And really, I wonder if maybe there isn’t something about disorientation and deep feeding!) We were moving in and between so many traditions and styles of worship. The Italian Protestants tend to be sort of heady and reserved. The Ghanaians and the Nigerians, mostly Presbyterians and Methodists, are much more spirited and physical — it didn’t take much for them to break out dancing in praise of God.

I was never sure– should I try and uphold the proper style of worship? Or should I let go a bit? …Though I can hardly attain the spirit and passion of the Africans, I am more spontaneous and informal than the Italians. Not by choice so much as necessity, I think I came off to most of the congregation as sort of free-flowing and present. I hope spiritual too!

When we got to communion, the Italian speaking worship leader offered an invitation. And before I could do likewise in English, he went on with the words of institution. I followed those up with their English equivalent (but without the invitation). But only then did I realize that no one had told me how they serve communion; I didn’t know the choreography.

But then some people, mostly from the choir, lined up, and we distributed the bread and shared the cup. I expected those first people who received would return to their places and another group would come forward and form a line. But no one did. Out of a congregation of maybe 70 people that day, only about 10 or so received communion.

I was particularly concerned that we had two Dutch families visiting worship that Sunday, and they hadn’t had communion, maybe because they didn’t quite get the invitation? (I sure didn’t.) I asked them during the next hymn, and offered to serve them after worship if they wanted, but they said it was ok.

I remembered all this — the feeling and experience of not being quite sure was going on in worship — on Sunday, when Delilah and Greta came forward during the prayer time and kneeled at the communion railing. I’d never seen anyone else kneel at Old First, except an occasional bride and a groom using the kneeler we hardly ever need. I worried, because Delilah and Greta are  mother and daughter: was something really difficult facing their family? Had they taken this physical posture to pray fervently (and perhaps to not share anything publicly)?

I asked each of the others who had come forward to share their prayers. I kind of looked over my shoulder to see if Delilah and Greta were still praying on their knees facing the railing. They were. I wondered if I should see if one of them wished to share a prayer concern, or if I should just take their having adopted the ‘kneeling-away’ position as a sign that they wished not to speak publicly, but only be in prayer.

Just as I finished with the others’ prayer concerns, Greta turned around and said to me clearly, but quietly (I wasn’t sure if it was loud enough for everyone in church to hear) that she and her mom had chosen to come forward for prayer, but to kneel as a sign of the solidarity with the sports figures who had taken up different forms of visible protest the past weekend.

Aha, now I got it! I dropped to my knee — as Bob S., and I had done somewhat unplanned the Sunday before — and prayed with the microphone so everyone could hear and understand. I prayed for all those who are protesting police violence against communities of color, especially sports figures, and also for the protests against the President’s high-handed attempts to curb basic rights and disrespect certain peoples.

I didn’t know it, but Holly told me later, as it became clear why Delilah and Greta were on their knees, that a number of people in the congregation moved off their pews and onto their knees, praying up against the back of the pew in front of them..

I’m wondering if in these extraordinary times in our country, maybe some of us might not want to take up the kneeling position for our prayers?

When I was first a pastor, at the Church of the Living Hope in East Harlem, that congregation’s tradition was for the leader to kneel before the communion table during the Prayer of Confession (while the rest of the congregation remained seated for the prayer). So I can pray from my knees easy enough; it’s even in my experience.

What would it mean to me and for us to kneel during worship? Well, if I took up a posture of kneeling during prayer, I would hope it signified that:

I haven’t figured out exactly how I might do this, since I need to be standing as I carry the microphone person to person as they lead us in prayer. …But, perhaps, after that, I will drop to my knee as I do the summary, pastoral  prayer, and then lead us in the Lord’s Prayer.

Maybe some of you wish to pray on your knees in this season of struggle for our nation.

At least I’m going to try some different ways to incorporate kneeling in my prayer leadership in worship, and then discuss it with the Worship Standing Leadership Group. If you have thoughts or suggestions, please feel free to talk with me.

In the meantime, thank you, Delilah and Greta, for offering your witness and quite possibly adding something important to the worship life of our church.