“We can go anywhere you want!”

“Can we go to Château-Thierry and visit a church?” 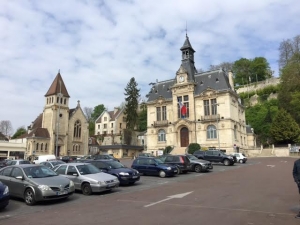 Over the years, each time I come to Paris, my grad school roommate Tam has cheerfully indulged my ideas for fun day-trips in the Paris region. This time, given my hesitation about phone calls with complicated questions and explanations in French, Tam even called the Château-Thierry Tourist Office and the church to arrange our visit.  Monique Delarue, a member of the congregation, opened the church for us and gave us a guided tour.

The Château-Thierry Temple, as French Protestant churches are known, honors the memory of 500 men of the Reformed Church in the United States who were killed in action in France during World War I. The story of this church is linked to Old First via Dr. Charles E. Schaeffer, our Pastor Emeritus, who organized the plans, presided at the laying of the cornerstone in 1922, and returned to Château-Thierry for the Temple dedication in1924. Our memorial garden is named for him, and there is a plaque on the brick wall nearby honoring his service.  (Thanks to our tree-trimmer Tim R., we can see it now.)

In July 1918, Château-Thierry, on the Marne River 55 miles north-east of Paris was the last obstacle in the Germany army’s advance on Paris.  A German offensive destroyed the town center, but they could not cross the Marne because the American Marines held the bridge. Asked to surrender, the American general replied “Hell, no! We just got here!” With some of the heaviest losses of the war, the French and American armies prevailed in the Battle of the Marne, stopped the German advance on Paris, and helped assure the Allied victory.

The Protestant community of Château-Thierry, their church in ruins, was meeting for worship in a room in the rue du Château, so the leaders of the Reformed Church in the United States decided to build a church as part of the town’s recovery, using what remained in the War Fund they had collected to provide canteens to serve the soldiers fighting in France.

The stone neo-Gothic church was designed according to a plan by Philadelphia architect Paul Cret, who was born and educated in France. Its resemblance to our former building at 50th and Locust Streets in Philadelphia, built at about the same time, cannot be a coincidence. The War Fund was enough to build only the church.  All the furnishings, the stained glass windows, and the organ were given by American families in memory of soldiers killed in action and in solidarity with the French people who suffered greatly in the war. The church bell was given by the Mercersberg Academy, in memory of their students who died in France. The stained-glass windows portray Biblical themes – holy communion, parables, the burning bush, and the French Reformers.  The window above the organ portrays the French soldiers coming to the defense of France and General Pershing and the American troops arriving by ship in Saint-Nazaire. In the center, General Lafayette,  standing with the French generals, greets the Americans. He is supposed to have said, “Lafayette, nous voilà.”  (Lafayette, here we are.)

After the dedication, the Americans turned the church and its new parsonage over to the Evangelical Reformed Church of France, both as a memorial to the war dead and as a living church, part of the community of Château-Thierry.  The church looks distinctly American.  Memorial plaques on the pews, the altar, the organ, the windows bear familiar names and Pennsylvania towns, including Allentown, Lancaster, and York.  Reformed Churches in France have simple interiors.  Attaching memorial plaques to doors, walls, pews, and windows is not a French church custom. Our guide was quick to explain this, and also to assure us that thanks to the Americans, the German army was halted at the Marne. America made a difference in both war and peace in Château-Thierry.

*A note of thanks to Bob Calvert who first brought this bit of Old First history to my attention.

** Many think that these are the words of General Pershing.  According to the latest edition of Bartlett’s the remark was actually made by Charles E. Stanton (1859-1933) at the Tomb of Lafayette in Paris July 4, 1917.  It also notes that Pershing denied having said “anything so splendid”  in his autobiography “My Experiences in the World War” (1931). 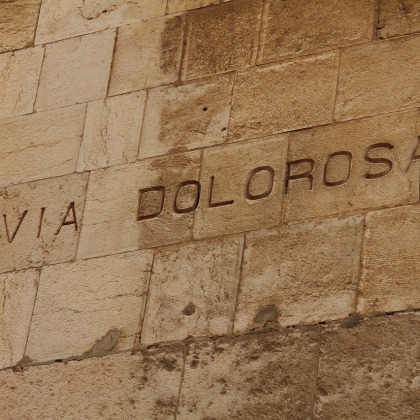