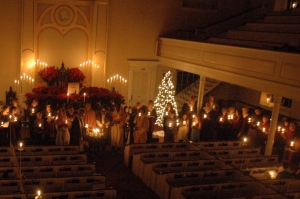 As pastor, I want to thank you all for bearing with me as we made changes to the schedule of Christmas services. I know traditions are particularly dear at Christmas time, and the changes upset some of you and your family’s traditions.

One of my favorite illustrations of how important Christmas tradition is comes from the publishing of the UCC’s New Century Hymnal in 1995. It was intended to be, as its name suggests, a collection of songs and worship materials for the 21st century.

According to UCC understandings of justice and inclusion — and our desire to celebrate diversity — the hymnal committee avoided both hierarchical and gender-exclusive language for both God and humans. That commitment involved rewriting the words to some hymns. It also meant including new hymns. And leaving out some other favorite hymns whose language could not be easily reworked. (I admit to missing “Once to Every Man and Nation” and “He Leadeth Me.”)

There were ruffled feathers and complaints in the mid 90’s about all this “newfangledness.” But because we were soon to understand ourselves as the “God is Still Speaking” denomination, the church more or less got over the changes and mastered the new words as as if they had been singing them all along. You might still hear folks wondering why we can’t sing the word “Lord!” But “Bring Many Names,” “In the Midst of New Dimensions,” and “I Was There to Hear Your Borning Cry” quickly became favorites.

Except for the Advent and Christmas sections of the hymnal! It’s still a sore spot. If you want to hear UCCers kvetch, ask what they think of “Of the Parent’s Heart Begotten.” Oh my word, some could write dissertations on why “Of the Father’s Love Begotten” was preferable. I’ve explained to folks that the new translation is actually closer to the original Latin for the hymn, but it never works! People want the familiarity of tradition as part of their Christmas celebration — maybe it helps us remember, even relive the magic of Christmas from our childhoods?

I felt a little like the hymnal committee after we announced the Christmas Eve schedule this year. I had checked with leaders, but not heard any “Lord, no, don’t do that!” But after the announcement, the response was heard. People were upset. Family traditions were jostled. People wanted what they had known.

I had come up with the idea for the two schedules in response to other concerns, heard repeatedly over my first three years — that the outdoor Creche’ service flowing right into Candlelight Lessons and Carols turned into a really long commitment on Christmas Eve. Some complained that lessons and carols all by itself was too long!

I also hoped that as our community has grown, maybe with two different types of services at two distinct times, we might be able to serve more people (which of course is at least partially why worship is referred to as a service in the first place… a service of the church to enable people to serve God!).

I thank you for weathering the change… particularly those whose holiday’s were upset or rearranged.

The good news is that the scheduling change did seem to make a difference. Adam S., who has treasurer keeps attendance figures, reports that 235 is about as big as he has ever know us to be on Christmas Eve. This year, with almost two completely different crowds, we had about 85 people at the outdoor service at 5 p.m. and 165 people at the 8 p.m. service in the Sanctuary. So, though in two venues, it was a well-attended Christmas Eve.

And, I think, our tendency to be disproportionately visitors on Christmas Eve was even stronger with the new formats and schedules. Both services tend to leave me leading worship for congregations I mostly do not know. We tried harder this year capturing names and contact information, and we had a little success.

And no one complained about the length of either service!

We had hoped that Mary and Joseph could “arrive in Bethlehem” or at least walk through the outdoor congregations with the donkey. And we borrowed a harness and even learned how to get it on him. But he was stubborn as a mule and wouldn’t walk on the lead. Actually, like some of the rest of us, he seemed to be a bit spooked by the rambunctious steer.

Also, we had wanted to end the Candlelight Service by recessing to the Creche behind the holy family for the benediction and “Joy to the World,” but the rain got in the way. But encircling the sanctuary (and Margaret and Wanda!) with the saints and their candles representing the light of God’s love in Jesus that we were to now take out into the world worked a good second best.

Maybe next year, if we can get a donkey who will walk (for the last few years, we’ve regularly taken the donkey, even the cow for strolls about the courtyard), we’ll really try “Las Posadas” with some caroling along Race Street before we come back to find a place for Jesus to be born in the Creche’…

Thanks again for your flexibility, church!