The note on the chainlink fencing reads: 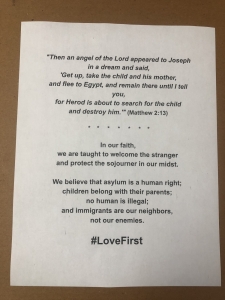 This chainlink fence surrounds our Creche figures — Mary and Joseph and the baby Jesus — standing off to one side of our walkway, captive to current US immigration policies… in the courtyard in front of the church.

This is a proposal of a faithful protest that has been requested by 5 of our members. They want us, as a church, to stand up on our faith and say “No” to our government’s Zero Tolerance immigration policies, the separation of children from their parents, and the way ICE is being used to intimidate and attack communities of undocumented migrants across the U.S.

All the details are not yet worked out. For example, the wording of the sign above is just a preliminary first draft. This use of our front courtyard and creche figures was suggested by Old Firsters who each wrote Michael independently after seeing articles about a church in Indianapolis that did something similar.

Michael raised the idea in worship on July 8, and 3 more people indicated that they’d like the church to undertake such a statement. Michael then took the suggestion to the Elders on Monday, July 9.  The Elders, respecting our congregation’s “Controversial Issues Policy” that requires congregational consideration and consent before the church takes an advocacy stand, have called a congregational meeting after worship on July 29 to discuss and vote on the proposal.

If you have any questions, concerns or suggestions, please plan to be at the congregational meeting on July 29, or speak with any of the Elders or Michael prior to the meeting.