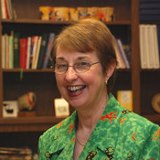 Michael and the Elders are proposing to the church that at our Anniversary Sunday worship service and celebration next fall, Sunday, Sept. 22, Old First name the Rev. Dr. Geneva Butz our Pastor Emerita.

What’s a Pastor Emerita? Like a college or university’s honorary designation of a retired professor as Professor Emeritus/a, a church can acknowledge a retired pastor with a parallel honor. It would be a sign of our gratitude for her pastoral service and the lasting effect she has had on this congregation, its service and our faith.

Emeritus is the Latin past participle meaning “having served one’s time;” by implication it signifies a person of importance having retired, but as an honor for one’s service having retained one’s former title. Emerita is the female version in the Latin.

Geneva served as Old First’s pastor for 19 years from 1984 to 2003. Michael, when he’s giving a history of Old First, explains that it was under the pastorate of the Rev. Daehler Hayes, Geneva’s predecessor, that the current incarnation of Old First, back down at Fourth and Race since 1967, began to take shape around our mission commitment to being “a church for the whole city.” But it was under Geneva’s pastorate that Old First colored in that vision with programs that invited others to work with us in assisting the urban poor.

After Geneva left Old First in 2004, she went on to serve as an Associate Conference Minister for the Pennsylvania Southeast Conference. There her ministry had great success helping to welcome new churches into the denomination and revitalizing existing UCC congregations. She retired from “employed ministry” in June 2012. That’s our occasion for honoring her now.

If you have any further questions, suggestions or concerns about making Geneva our Pastor Emerita, please share them with the Elders or Michael. If need be, they will organize a community forum in which people can come together and talk prior to the congregation being asked to take a vote.

There is a congregational meeting being planned for June 30, immediately after worship. Alongside some budget revisions and simple amendments to the by-laws, the congregation will be ask to approve the following affirmation:

“The Pastor Emerita is an honorary title respecting a retired pastor’s service and faithfulness. In light of Geneva’s retirement from full-time ministry with the Pennsylvania Southeast Conference, and because of her service as Old First Reformed United Church’s pastor from 1984 to 2003, the Old First congregation is naming her its Pastor Emerita.

Although that title is honorific, we are asking Geneva as Pastor Emerita, to:

~ be present as she wishes in the life and worship of Old First, although she is now and will continue to be a member of Tabernacle United Church;
~ preach two to three times a year;
~ make pastoral visits as agreed upon between Michael and Geneva;
~ take on special projects as agreed upon between Michael and Geneva (as, for example, Geneva did with Lois’ move to the Phoebe Wyncote Church Home).

As we intend to honor Geneva’s service with this new relationship, in naming her Pastor Emerita, we are not getting an additional pastor on staff. Instead, we are making room for her to minister among us as she, the pastor, the congregation and the Holy Spirit see fitting.”