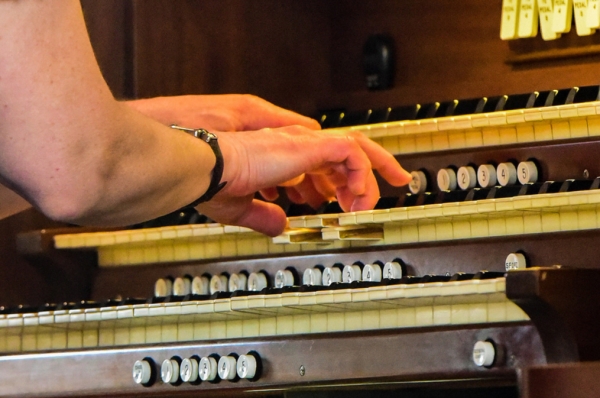 Another month has gone by and I’ll be coming to Old First on Sunday, May 19th to add organ to the music ministry.

The postlude I’ve selected is called: “Tollite Hostias”- “Praise Ye the Lord of Hosts”, by Camille Saint-Saens (1835-1921). He’s a composer likely to be familiar to many of you. His most famous instrumental compositions “Carnival of the Animals” and “Danse Macabre” are likely recognizable as well.

There’s a lot I could tell you about Saint-Saens, but I’ll give you just a snapshot for now. Saint-Saens was born in Paris, France. He was mainly raised by his mother and aunt, given that his father died just two months after Camille was born. He began playing piano before he turned three, and by age five was giving small performances for family associates. At age seven, Saint-Saens began training with Camille Marie-Stamaty. Saint-Saens became known throughout Paris as a child prodigy. He was greatly influenced by the music of Bach, and also excelled in languages and mathematics. He maintained a keen interest in philosophy and astronomy throughout his life.

By the time Saint-Saens was thirteen, he gained admittance to France’s most prestigious music academy, the Paris Conservatoire. There, great emphasis was placed on organ since it was seen as offering the greatest chance for employment. Saint-Saens excelled on this instrument, and in 1851, was named the academy’s best organist.

Saint-Saens first employment was as organist for the Saint-Merri church in Paris, which served a congregation of over 25,000 members. During his career, Saint-Saens composed organ works, piano concertos, instrumental music, and had success composing operas. His opera “Samson and Delilah” was warmly received in many cities throughout France and Germany.

Saint-Saens frequently traveled to England and Germany to perform. By 1913, he had planned to retire, but the outbreak of  World War I had him performing concerts for charity to aid the war effort.

Saint-Saens’ last performance was in November of 1921.