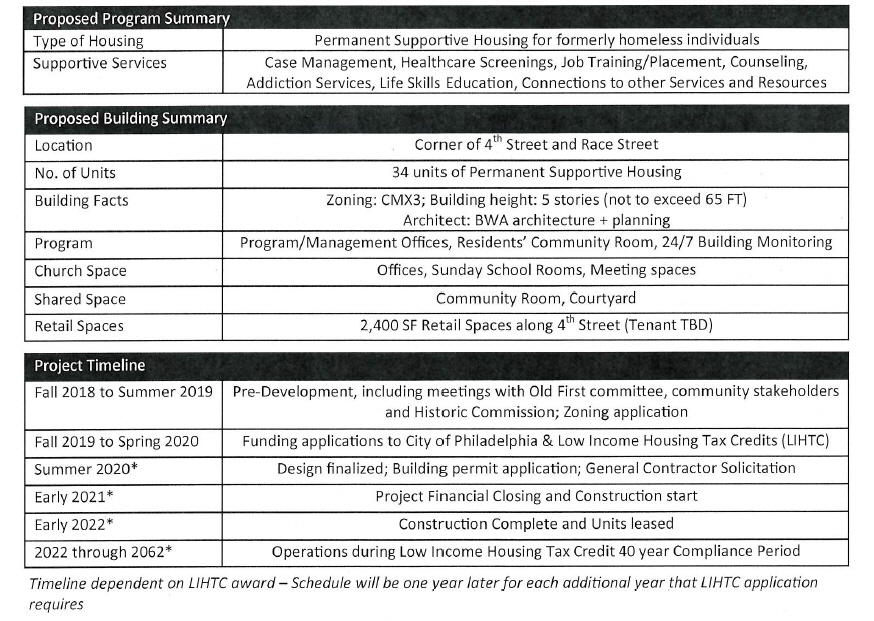 Michael has been wary — maybe too wary — of how the neighborhood would react to our plans to build housing for people who have been homeless for a long time.

It’s not like neighborhoods can’t act badly when they learn a social service programs are going to be located in the midst. David, the Executive Director of Community Ventures, remembers all too well (and maybe has told Michael too much about?) the fight they had to survive in order to place a residential program in Germantown.

You might remember that two summers ago, in 2018, Michael preached a season-length sermon series on favorite hymns. That was because he expected that summer was when we were going to begin talking with the neighborhood about our plans. He was looking for an easier preaching assignment because he feared that irate neighbors were going to be “dive-bombing” him at the church office. (For Michael, it hearkens back to a memory of when he took a stand in Brooklyn after the police shot an unarmed Black man. Michael’s white parishioners walked out of the Sanctuary during the sermon that day, but then showed up at his office day after day up in arms for weeks.

But, it turned out, we didn’t begin talking to the neighborhood until early 2019. And the reaction has not been at all as expected. In fact, it’s been quite heartening.

We went to the religious congregations first because many of them already look to Old First as a leader in social ministries. Their support was the “low hanging fruit” for our effort building support. We were not disappointed.

But then we touched base with local leaders who have been involved in neighborhood associations, zoning issues, the business improvement district, and developers and the Councilman, and they actively wanted to support us.

As we have shared with the congregations, the support has been so substantial that in fact the project has moved along much faster than we expected.

So this Fall, with Historical Preservation’s conceptual approval and zoning to do the building, we are actually beginning to apply for funds, primarily the city’s special funding for housing the homeless and the federal tax credits that will be the lionshare of the $15 million budget for the construction project.

But the city’s funding application requires there to have been a community meeting about the project. You probably can’t hear the dread that last sentence engendered in Michael’s heart. Though word has gotten out, this was the moment we were going public. “What if the wider neighborhood is up in arms; what if neighbors organize an action against our plans; what if someone sues.” That’s more of how Michael was feeling about all this!

That meeting happened a week ago Thursday night. It almost had as many Old Firsters present in support of the project as it had neighbors coming to learn about the project. And the questions were as expected, and in general good. People wondered who the new neighbors would be and how they would be chosen and supported. As Megan G. said to me the Sunday before, “Whether they like our answers of not, we already have answers for almost everything they can ask.”

There were a lot of questions, including:

Will the building house men and women?

Is this transitional or permanent housing?

Is the church continuing the shelter?

Can we see other buildings / projects that Community Ventures and DePaul USA have done?

Have we spoken with the developers of new properties?

Will these residents have jobs?

How will the support programming be funded? 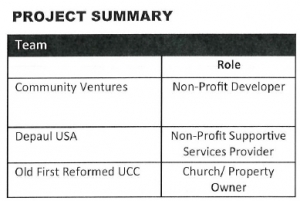 Will people other than the residents receive services at the building?

Is the building going to be sustainable?

Who will own the property and the new building?

How will residents be vetted?

Will there be a procedure for dealing with a resident who is not a good neighbor?

How tall will the building be?

What kinds of retail could be on the corner?

Michael got the sense that there was as much concern about the building casting a shadow on the condo across the street as the other issues. His favorite comments of the night were:

A neighbor across the street said, “I am the only Latina in my building. And look around tonight. Except for the people from the church, I am the only person of color from the neighborhood. I’m looking forward to the greater diversity, both racial and ethnic and economic.”

But the best comment happened before the meeting. A neighbor came to warn Michael that someone in her condo keeps talking about how this is going to be bad for real estate values. Michael responded, “We have the answer for that: Project Home has done a study that show well-run programs for the homeless have no economic effect on property values. And Old City can absorb this without any trouble.” To which our neighbor responded, “What do people expect? You are a church for Christ’s sake.” She looked grief-stricken, apologized and said, “My grandmother didn’t like what I just said!” Michael, laughing, responded, “But you were point on. Amen!”

The project is now public. And the reception — leaders have been enthusiastic, and the regular folks seem to be accepting that Old First has done this kind of thing for years, and now we’re going to do it better.