Last week, 12 of us participated in the Walk+Run Against Hunger: Anna, Jackson, Trixie, Warren (the youth who walked); Ibukun, Iyabo, Janet, Jonathan, Megan, Ruthanne; Yiwola and me.

For the past few weeks, I’ve been wondering:  if Jesus were to make a triumphal entry into Philly, where would he come?

Into Center City across the Market St. bridge from 30th Street Station?

Or over the B. Franklin Bridge, as if Camden where our Bethany, where Mary and Martha and Lazarus live?

Perhaps through Chinatown’s Friendship Gate at Arch & 10th Street and on towards the new Pennsylvania Convention Center?

Or maybe less central… and, instead, out in one of the neighborhoods of North or West Philly where the need, at least materially, is so much greater?

But then at last Saturday’s Walk, it felt as if I were in a Palm Sunday parade: …maybe we weren’t all aware of what we were really doing– what it was all about. Simply a couple of hours on a pretty spring morning where we got wrapped up and carried away in a crowd. Walking with friends, talking. A few hundred people. Lovely. And more important than we realized. But hardly noticed by the rest of the city. Much less the world. And it didn’t last as long as I expected. Maybe time flies when you’re doing a good thing, helping others with people you like, but before I knew it, I was off on my own, walking home… Sure, we raised some money, made a difference. But over against the profits of agribusiness and multinational food corporations, or even compared to what is needed to satisfy all the hungry people in our city alone, it hardly changed the world.

And in the face of these last weeks, the unrest in the Middle East and North Africa, our effort was even more humble. People there have been risking and losing their lives for freedom, standing up to make room for democracy. After the tense, but finally successful change in Egypt, perhaps the most disturbing scenario has been Libya’s– where a ragtag group… armed but untrained– protestors have been attacked by their own head of state and the nation’s army.

Perhaps most disturbing… frightening really… is that such civil unrest and the conditions that cause it are so far from unimaginable. No one can really claiming to be surprised. Rather, it’s an all too familiar political landscape, almost a parable of statecraft– how the power to control and dominate lay waste and cause destruction. No anomaly in the history of humankind. Instead, a repetitive pattern that gets played out over and over again.

This is the political backdrop for Jesus’ arrival in Jerusalem. Afraid of God’s liberation remembered during the Passover holidays in its outlying colonial possession, the Romans had just marched an Army’s triumphal entry into the Jewish capital for their high holy days. Only this wasn’t any show of peace.

And the crosses that dotted the hillsides, and still dot our world today– they were/are the scars left behind, markers of brutality and death, the fierce and brutal responses dealt against any and all challenge to empire.

Humans grab power. We hold it violently and without justice. We maintain, retain our power through intimidation and fear, or worse.

And, of course, “power over” is not only the prerogative of the political arena. It’s the modus operandi in other realms of our lives too– all the way down to our personal relations. Even in the religious sphere, history is littered with power struggles, violence and the quest for domination– between faiths, among parties of the same faith, even in single congregations.

Over and over again in human existence, winning becomes everything, and there’s little concern for losers. It seems, humans haven’t evolved all that much. We certainly haven’t attained enough understanding to avoid the misuse of power.

Matthew’s Gospel has as much blood splattered all over it as our contemporary world does: the Emmanuel child who escaped Herod’s mass murder at the beginning finishes his story– almost finishes his story!– a victim of a new cadre of frightened leaders. It may take a whole lifetime, but empire won’t rest until it destroys its adversaries and rivals.

Intimidated, worldly power uses intimidation to control people– drawing just enough blood to keep everyone afraid. Like so many people before and after him, Jesus died at the hands of reckless and careless power.

Into this bloody mess we make– gun violence in Philly, and Libyans attacking one another, and the U.S. in military actions in too many places to name– into it all rides a strange figure.

An itinerant rabbi who’s somehow gained enough of a following to unsettle the authorities.

A teacher who’s been called a prophet by the common folk who followed after him.

A man who his disciples speak of as more than just a man.

Into our lives of power struggles, into our cities of innocent victims gunned down, into the world and the casualties of all its war, and into the everyday, but hardly less violent friction of our lives, rides Jesus.

In Matthew’s Gospel, Jeusus’ ministry begins with the “Sermon on the Mount,” his manifesto of what Jesus called “The Kingdom of Heaven.”
A new earth. Or at least a different way of living that can make for a totally redeemed order. Striking for its absence of violence and domination.
The God who invites all people into a Divine reign does not begin with or look with particularly interest or hopefulness to the powerful, the victorious and the successful. Instead, God’s invitation is offered to the grieving, the poor, the meek, the peace-makers, the persecuted. The very ones the world discounts and shuns as losers God celebrates and blesses!

The heart of Jesus’ message is simply this: our way, the human system is not working. And there’s an alternative; we have a choice, a different, a better way– a Jubilee-Kingdom of grace, equality, compassion, sacrifice and mutual service. A way of living together that is not about grasping “power over” to assert oneself and push or hold down others. Instead, Jesus came preaching and teaching, transforming individuals and founding a community living out a new kind of spiritual “power among,” God with us, that comes of and is found in giving away and sharing and serving one another.

Opening the final chapter of his public ministry, on Palm Sunday, Jesus is still “preaching” his theme, still pushing this “Sermon on the Mount” vision of the Kingdom. But in this reprise, instead of speaking it, he enacts it.

Maybe he’s given up trying to teach us these things? Now he’s just going to show us… Now he’ll just live it in hope that we finally catch on.

Jesus’ redemption is, as Quinn Caldwell suggested in the UCC’s daily devotionals this week… showing us that we don’t actually owe our own sins or the sins of our world anything. That we have, in fact, always been free, are free now to walk away from them all. Simply turn around and walk back home to God. Redemption is finding something — someone — worth following, being different for, spending our lives on.

So Jesus rides into Jerusalem and into Philadelphia, into our lives in humility and peace and love. Bringing a bewildered foal, and a whole crowd of bewildered people in tow– wandering, wondering, following at least for a minute.

Jesus rides in not to overthrow the powers that be. But to reveal them in all their destructive intent and effect. To throw their violence in high relief. His entry on donkey is in direct contrast to the arrival of the Roman commander and legions and chariots.

His willingness to die– not because God wanted him to die “for us,” but because Jesus was willing to give himself rather than resort to our world’s destructive patterns of self-defensiveness— intimidation, domination, harming others. He submits to the violence,  hangs on their cross, in order ironically, to strip their power, to undermine their punch.

Jesus rides into our lives not to create another worldly government, but to show up the emptiness, poverty and fearful vulnerability of all our world’s dictators, of everything in this life that tyrannizes us.

He heads the other way. God’s way of love and grace and peace that those who cling to worldly power can neither understand nor stamp out.

Jesus rides not to humiliate or even defeat his opponents, so much as to forgive them. To invite them and us down this different path. Knowing many will fail to hear the message or grasp its meaning… understanding most may well see his way as a failure– so addicted to domination that we can barely recognize much less emulate the creative, gracious alternative he offers, he comes in the name of the Lord nonetheless.

Giving up everything, so those with eyes whose sight has been restored might see an alternative pattern begin to emerge… so those with ears to hear might notice, even in the midst of the shouting and cries of power and violence… He rides by, inviting us to step out of the crowd, to leave behind our fear, and the marching orders of fear by which power dominate. He rides by, “Come follow me.” Join God’s march. A parade really, or the dance of true freedom.

Today, like back then, the crowds get caught up in the pageantry of the moment, but don’t get it. Get carried away in the excitement, and then, afterwards, scratch their heads and ask, who was that?

Then as now, the answer lies not in the hierarchical frameworks of this world and its top-down power, but in the mysterious, gentle influence of love, which, in the end, is what the powerful fear most, because it’s the only force they cannot control or compel, co-opt or stop.

Beloved: run and meet Jesus coming to the gate of your life. Encounter this One as if for the first time. Behold, a “servant King” whose arrival critiques our ways and the ways of our world.  All the upside down ways of our world that we owe nothing.

Instead, we can walk in another way, follow the Holy One, because God is stooping low, tenderly touching our lives, coming right to where we live. Arriving in our mess on a donkey.

Walk with Jesus. Today. This last week. Place your coats on the road before him. Make a way for him in your life. Follow even where you don’t want to do. Let go of your fears. Stop protecting your position. Instead, serve others. Wash their feet. Take the smallest piece of the Bread of Heaven. Drink deeply from the cup of salvation. Face the betrayal. Acknowledge, even submit to the injustice. The mockery. The humiliation and misery.  The Via Delorosa. The cross.

That we might stay with Jesus. Accompany him. Enter into his triumph. His protest against against all the ways domination and death reign in this world and limit our lives.

Stay with Jesus. Dying to whatever robs you or others of real life… that we might be resurrected to true life.

Shout “Hosanna,”  “God saves.” Welcome the One who comes in peace, in the name of the Lord. Stand against, bow before all hatred and violence and disrespect. Step out of the crowd. Follow, walk, give, proclaim, live God’s justice “on earth as in heaven.” May our palms today re-present Jesus witness’ that we’re on God’s way. Amen. 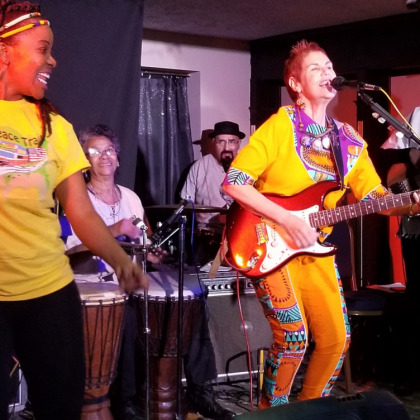