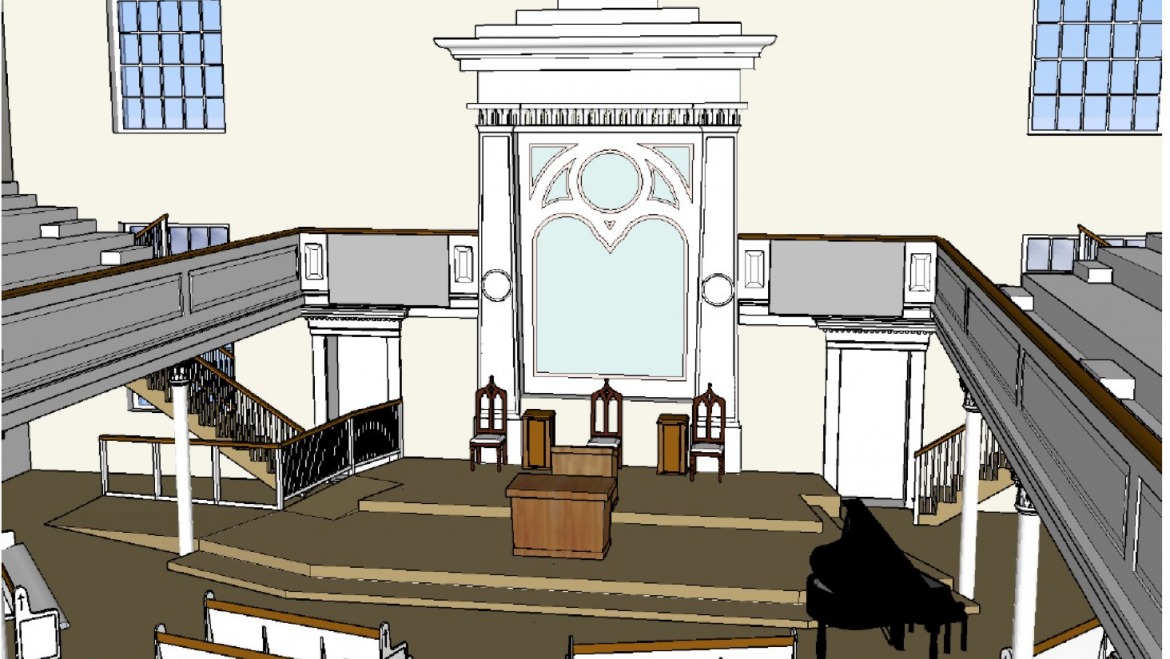 (Pastor’s note: This is part of a presentation I am making for the UCC’s Conference for “Partners’ in Building.” I’m sort of blowing my horn about you all, so I thought you should know. Also, it might help you think about all we’re accomplishing…)

My job is to give you a charge, as the end of your first day of this Conference.

Essentially, I’m offering a testimonial, a building project success story… flowing, I pray, into some encouragement.

During a tough patch in our ministry, almost 15 years ago, Old First decided, despite it’s financial shortfall, it didn’t want to cut back on its social service ministries. So we took money from building maintenance to keep outreach afloat.

Our forebearers left us 3 buildings —

Expensive to upkeep structures that aren’t exactly what we’d design for our ministries today.

We deferred almost half a million dollars of maintenance over a series of years to fund the shelter, the breakfast program, the cupboard, and the service camps.

…An honorable tack to maintain our help for others, but a strategic nightmare — because it doesn’t work.

Old buildings without proper care (like people) just get needier and more expensive.

God smiled on us; Pretty quickly we dug out of deficit spending. But we never found the extra money to catch up on the deferred maintenance and other building needs. So we decided to undertake a capital campaign.

Joe Hough, the President of Union Seminary, told me when I was the Regional Conference Minister in NYC, “If local pastors give me an opening to their members who could make a capital gift to the seminary, I’ll get the gift and give those pastors back members twice as committed to the cause of progressive Christianity.”

A capital campaign is a fundraising mechanism for an infusion of dollars, but even more it’s a chance to lift up mission — helping people to invest financially and emotionally in a vision of ministry.

So we had a plan, but we still had a problem.

When an historic architecture firm evaluated the property for us, their conclusions were harrowing —

to repair everything we possibly could (but would never have the money for!), the architects estimated would be $2,400,000 — roughly half on the Sanctuary building and an equal amount on the other two buildings.

The UCC’s Susan Mitchell did a Capital Campaign Study for us — she was great — to give us some sense of what we could raise.

Old First is a generous congregation, but there aren’t many among us with deep pockets. We’re more of the teacher, social worker, do-good lawyer, librarian crowd.

Susan determined that people were feeling good about the church; they were willing to support a capital campaign to get the buildings in better shape; and we could expect to raise about $650,000.

We could have thrown up our hands. But would that have been faithful?

Don’t we need to remember that none of church is what we alone can do?

Ministry is always more need than we can meet, and God blesses what we CAN do.

We prioritized the Sanctuary, and came up with a 3-stage plan for much more work than we could afford to do.

First shoring up the building envelope and dealing with a lot of important building issues that weren’t visible or sexy. We used our first dollars on the harder fixes.

Second stage, the redesign of our front courtyard for some visible bang for our buck and to improve our face to the world.

Third, we’d renovate the Sanctuary last — because we figured it’d be the easiest to raise extra money for. People all wanted to know when we were going to get to the Sanctuary.

God smiled on us again with the other two buildings. It turns out that, working with two other partners we can redevelop the west side of our property for permanent, supportive housing. Build a whole new building.

Old First has given over half our Sanctuary building to housing the homeless every winter for 38 years.

In my time at Old First, it’s not unusual to hear people say: “30 guys on our Social Hall floor for over 30 years, with all their belongings in plastic tubs — that’s just not enough for too long.”

Permanent, supportive housing would be a significant upgrade in our ministry and give us the Social Hall, our largest program space back — AND freer use of the Sanctuary building half of each year.

As well as 34-efficiency apartments. the new building will provide the church with a second large program space (that can be subdivided for smaller meeting rooms)  and new accessible offices.

It all sounds easy now. But it’s been all kinds of work. Inside the church and out.

It has involved permission to move a 1760 building 50ft.to the south, and permission to tear down the 1972 building we built. And organizing community support for both in our historic district where no one wants change.

We have the first part of the project funding $2.5M in place; we are waiting to hear (any day — say a prayer for us if you will…) on the rest of the funding, $11M, and if we receive the funding, we break ground next summer.

We were gonna wait on the Sanctuary renovation until closer to our 300th Anniversary in 2027.

Then the pandemic came along. Suddenly, the Sanctuary was lying fallow. And we decided we’d better use the time.

At first it was repainting the room and laying down a new floor for less than $200K. But once we got the pews taken out and saw pledges coming in and began to think about the mission possibilities… the project grew:

a new entrance to the building,

a redesigned chancel, replacing the pews with chairs, updating our lighting and electric, adding technology so when we get back people can participate equally in person or from a distance: from their hospital beds or from their jobs overseas. . .

Rather than just redecorating, our Sanctuary renovation is a mission goal — how we can do worship in new ways and how our sacred space can serve the wider community better.

My ex-wife says about our family, “It didn’t work out like we planned, but we are all still close and care about each other, and what more can you ask for.”

I have come to think her insight applies as well to church building projects: they won’t be perfect or even turn out like you planned, but that doesn’t mean we can’t be faithful in ways we never could have foreseen.

So my charge to all you, partners in building:

Don’t throw up your hands over all you don’t have; do what you can. And let God do more than you can imagine. Get started. It’s going to take a long time, even with God’s help.

People are more important than buildings.

But, church, if homelessness really is a problem, most of the important stuff people do needs a roof over our heads (says that pastor currently leading outdoor and online worship!)

And it’s all going to take longer than you expect — with the people and the buildings!

You don’t need to do it all on our own. Just like pastors need to refer parishioners to other professionals, the church needs to call on others for big projects like this.

Humility is key. Networking is not bad either.

Your project probably won’t turn out like you expect:

So look for serendipities — they are often how God shows up.

Expect surprises that sometimes work out better than what you planned. And even deadends can turn out just to be detours.

Buildings are only a means to an end. But means can be sacred… and transformative too.

The tangibility of buildings make them strong symbols. Get folks to invest in the building not as some golden calf but as one of the ways they support a greater mission.

Finally, you aren’t going to undertake big projects without some tension and disagreement. Churches aren’t comfortable with discomfort, but you probably have to be!

David said in blessing Solomon’s building of the Temple:

Be strong and courageous!

Do not fear and

do not lose resolve.