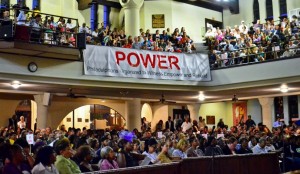 POWER continues to work on its two big ticket items in its fight “TO BUILD A CITY OF OPPORTUNITY THAT WORKS FOR ALL:”

1) a jobs agreement wherein people from neighborhoods with the highest unemployment get help getting jobs in the larger government-financed projects, i.e. the airport expansion, and

2) turning around a school district that is on the brink of failure and currently doesn’t serve students, teachers and whole neighborhoods of the city well.

POWER is also working on immigration and gun violence issues.

Please mark your calendar: the date for a Spring Assembly has been set: Sunday, April 21 at 3 p.m.

Where? Well, we are planning a 4,000 person event, and not many venues hold that many people, so the location has not been determined yet.

The Old First Local Organizing Committee has promised that we will bring 150 people. “Us? 150 people, you say; that’s impossible!”

Why? We believe jobs and schools are that important for making this city work for all it’s residents!

And we’re willing to put in that much work to make this happen. Because we expect as much from our civic leaders: jobs for people who want to work and schools where teachers can help our children learn (and prepare for when they will work!)

It’s too early to be specific about “the asks” but we are planning for top officials to be present to make significant commitments to our work and for the betterment of this city. For example…

Mayor Nutter will be asked to commit to supporting a historic and precedent-setting agreement in which preference and training will be given to Philadelphians for the new jobs at the airport.

Also, Superintendent Hite from the School District will be asked to support what our Education Team establishes as POWER’s vision for improving the schools of this city, not just for a few, but as an option for a good public education for every student.

And, yes, we have PROMISED to bring 150 people. That’s a big commitment on our part. But if we are asking big commitments from our civic leaders, can we ask anything less of ourselves?

Expect to hear a lot more about this meeting as details develop.

Also, expect to hear more from our local organizing committee as it develops a detailed “turn-out” campaign, and asks for your help.