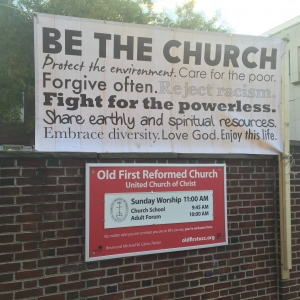 Personally, I have been despairing the polarization of American politics for most of the Obama Administration. There is a unbreachable political divide across the aisle hardened by the President’s being Black.

While I marvel the President’s having managed some impressive legislation despite Congress, mostly, Washington is a stalemate: our country is often left a ship adrift. Statehouses are not as paralyzed, but with their relative mobility, what they enact is often more frightening. These are my personal opinions, but they provide a context for the rest of this E-pistle.

Over and over during the extended, ill-mannered and ill-tempered presidential race, I have wanted to preach against the hatred of immigrants and women, undisguised racial superiority, religious self-righteousness, and the sneering disregard for basic civility that binds a society and makes us human. It’s all just unfettered arrogance. Can’t a preacher preach against arrogance, the original sin?

In the U.S., churches are not supposed to trespass into partisan politics. We can take on issues, but not align ourselves with parties or promote individual candidates. If we don’t resist such temptations, we endanger our tax exempt status.

Can I then never from the pulpit (and with the full backing of Christian tradition supporting me) question the positions, statements or missteps of politicians? Perhaps impolitic, wasn’t Pope Francis statement on target — “A person who thinks only about building walls, wherever they may be, and not building bridges, is not Christian. This is not the Gospel.” (I might have ‘nuanced’ the line a bit by suggesting the wall-builder wasn’t being Christian {rather than not being a Christian — I mean, how often all of us fall short of the demands of our faith!}.)

This election season, I have felt more impulse to name names and name “crimes” than in my 25+ years of preaching. If the media won’t call them out; maybe the church has to? Particularly, with many of these candidates wearing their Christian faith on their sleeves like some sort of Divine imprimatur — alongside their shameless dehumanizing slurs and campaign promises of greater injustices.

Haunting me is the tragic history of the German Protestant church: in the days of the Third Reich, it allowed itself to become “nazified” — even if mostly by its non-resistance to Nazi policies that were anathema vis a vis Christian tradition and faithfulness.

There was a small group of leaders and congregations that resisted, die Bekennende Kirche (the Confessing Church), — the size of which might be seen in that 3,000 of the total of 18,000 pastors were identified with that movement. But even most of the Confessing Church’s protest was focused on religious freedom and the non-interference of the Nazi regime in church affairs, rather than solidarity with those suffering at the hands of Nazi crimes.

Mostly, the German Protestant Church found neither voice nor power to stand up for the Gospel or to stand up to the government / nation as it began systematically discriminating against, segregating and ultimately murdering people. The established church simply followed along on the path to hell and into an era of unbelievable sin.

The Rev. Martin Niemoller, the head of the Confessing Church movement, left us with the haunting quote:

First, they came for the socialists, and I did not speak out —
because I was not a socialist.

Then, they came for the Jews, and I did not speak out —
because I was not a Jew.

Then, they came for me, and
there was not one left to speak for me.

A couple of weeks ago, I posted a NYTimes article to the Facebook page. It was an analysis of a single candidate’s claim to being Christian over against the positions he is advocating. Shortly after I posted it, one of you wisely suggested, “Since it’s written about a single candidate, instead of the whole field, it could be considered partisan, and perhaps should be taken down.” I’m not above good advice! Another of you recently added, “I thought what you shared was just on the ok side of the line. It was politically relevant theology…having said that, I think we’re right to err on the side of caution.”

I thought about all this again this week, when the pastoral staff of one of our larger, historic UCC congregations published a statement on the church’s website entitled “Disavow” in which they “took out” the policy positions, campaign trail statements and political knowledge and acumen of one of the frontrunning presidential candidates. Instantly, it became a minor online sensation (at least among UCC clergy across the country!).

I couldn’t figure out how my colleagues could imagine being able to get away with such a pointed statement about a single candidate. A friend added another interesting query: “What was the process by which the congregation was consulted and signed off on their statement?” Another friend raised yet another question: “What benefit or outcome could come of pastoral denouncing a specific candidate… from even a notable, historic pulpit or before such an audience?” In short time, the post was removed from the church website.

While, personally, I wholeheartedly agree with their critique, I don’t think the church can make such a move publicly… at least without risking dire consequences. Perhaps, religious passion or righteous outrage overwhelmed clear thinking?

This all came back to me yesterday: I was out in the cold, standing on top of the wall at 4th and Race, with a screw gun in my hand. Working with Janice and John O., we were constructing a billboard structure on which to hang the “Be the Church” banners that two angel-gifts have helped Old First buy. We are going for maximum visibility. And if they are going to stay up for a while, they need a real “sign board” to be tacked on. (And Roxana is working on fence signs to amplify the messages!)

Up there on my precarious perch, I realized: while we can’t directly denounce or disavow a specific politician or party no matter how egregious their positions or statements, we can — and must — “Be the Church.”

There may come a time when my faithfulness as a pastor (and to my ordination vows) forces me to act or speak in ways that will bring a direct reaction or consequence from the state. Before a demagogue takes charge of our nation? Before the collapse of our democracy? Before certain faiths are labled ‘persona non grata’ in the land of the free? Before neighbors are shipped off en masse? Before basic human rights are systemically denied? (As I write this, I feel guilty — I suspect many times have already come, and I have missed or fallen short of faithfulness…)

But before I feel I have to join the resistance!… I am going to ask you to help me make ‘Being the Church’ not just a sign on the corner in front of our property.

But a reality in the life of this congregation and in our lives wherever we find ourselves.
A rallying cry.
An insistent protest.
A courageous, life-changing witness.
The fabic of our faith.
Something we live out, even when there is a cost to our discipleship.
Something we give our our time and attention and dedication to and for…
There are those who have come before us who have given their lives up in order that they and we can be the church.

Be the church.
Protect the environment.
Care for the poor.
Forgive often.
Reject racism.
Fight for the powerless.
Share earthly and spiritual resources.
Embrace diversity.
Love God.
Enjoy this life.

See you on Sunday,