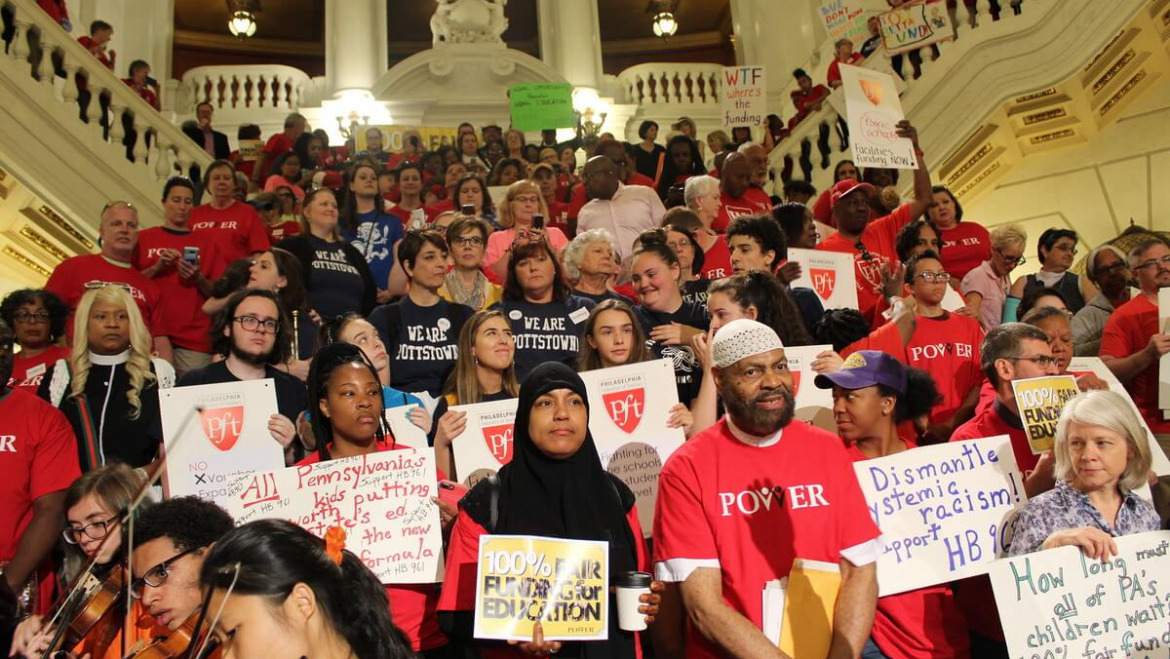 (These are the words Michael used in Harrisburg on Wednesday to open POWER’s protest against “the rainy day fund” that denied school across PA full and fair funding.)

I am the Rev. Michael Caine,

And one of our first mission commitments,

long before the Revolutionary War,

was founding a school for

…because the church recognized

in the lives of individuals,

and a democratic nation.

Our German School however didn’t last more than about 30 years. it was made unnecessary / obsolete as the 19th century progressed,  public schools were founded and the commonwealth made a commitment to educate everyone of its children.

It’s in our commonwealth’s constitution – that the state will educate all of its children.

But there’s a trial going on right now. School districts, parents, the NAACP, the Association of Rural and Small Schools are all suing the commonwealth because they believe Pennsylvania is failing its constitutional commitment to educate every child.

So we are here today as POWER Interfaith. The largest faith-based organizing effort in Pennsylvania. We’re organizing and working together across the state to make PA a commonwealth that works for all.

Today, we are here as the Education Justice Team was from POWER Philly. In the weeks ahead, on Wednesday, it will be POWER Lancaster, and POWER Bucks, POWER NE… We’ll just keep coming back so the legislature knows we’ll be here and we will be loud until our schools are funded equitably, fully urgently. . .

We have been organizing for full, fair funding for all our schools since 2016, and we were heartened when Gov. Wolf’s budget this year effectively incorporated all that we have been asking for.

We were not surprised but fighting mad when the Republican controlled legislature refused to make available the money needed for our schools.

Under the leadership of Mr. Corman and Mr. Cutler, the legislature chose to continue to underfund education in the commonwealth, and put money aside in a rainy day fund.

All our schools have gotten is rain!

why won’t the legislature

use the rainy day fund for education?

Will you join me –

Why can’t the rainy day fund be used to educate all our children?