Protest Is What Witnessing Looks Like in Public: Old First E-pistle 07.12.19 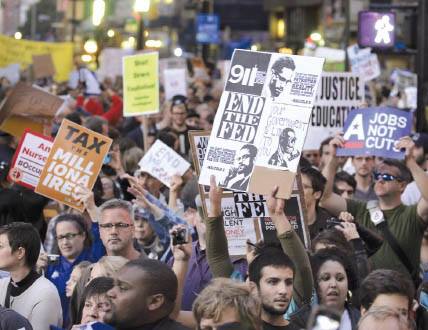 A friend teased me after he heard that I was in Manhattan on Monday for Transportation Alternatives’ “Die-in” commemorating the 15 cyclists and 55 pedestrians killed in NYC by drivers in the first 6 months of 2019. My friend poked, “Now you are traveling to other cities to protest other people’s issues and injustices?” I laughed in response, “My son works for Transportation Alternatives, and I was in NYC anyway. But wins for bikers anywhere make it safer for cyclists, pedestrians and drivers everywhere.”

I’m going back to New York this afternoon for another protest, Lights for Liberty, A Vigil to End Human Detention Camps. There is a Lights for Liberty protest in Center City midday on Friday (at 12th / Arch from 11:30 am to 1:30 pm) and a number of different ones around the area on Friday evening. (Just google http://www.rallylist.com/ ) But the events planned for DC and New York are much bigger, and I’m meeting friends at the one at Foley Square in lower Manhattan.

I am having an argument with another friend about protests. The occasion of our disagreement is my holding my head in my hands and rhetorically worrying, “With all that this President and his Administration have done, why aren’t people in the streets? What’s wrong with the U.S. population? Why aren’t we shutting things down? Why aren’t we insisting, ‘This is not our America; this is not our Future; this is not what the people want.’”

This second friend apparently holds protesting in low estimation. He thinks of it as some exercise in freedom of speech, which is not untrue. But he complains, “You can’t just protest; you have to also do something!”  That really frosts me! Like protesting isn’t doing something?

When I begin to inquire about my friend’s gripe, he explains that he’s talking about the desperate need for people to register and / or to turn out voters. I am not advocating protest instead of the ballot box. In fact, protests should drive people to the ballot box. 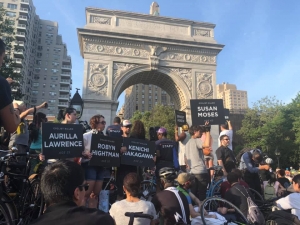 Protests serve an important organizing role for elections, public opinion and even how the media portrays issues. My friend seems to worry that protests are going to drain all the time, effort and energy out of our political system, leaving even less for campaigns and elections, less for citizen participation and voter turnout. I try to explain to him  that protests — raising the profile and hence the public’s awareness of problems, and also often reframing the discourse around issues — can actually be engage people in paying attention to and participating in the political process. And sometimes, protests can even change a situation independent of the ballot box, or pf the threat at the ballot box.

One cannot imagine that either the Civil Rights Movement or the Anti-War Movement during Vietnam could have succeeded without the protests that fueled, raised temperatures, and forced politicians and others to take actions they otherwise would not have.

Have you heard the phrase we use fairly often in church these days, “justice is what love looks like in public”? It occurs to me that one could likewise suggest that protest is what witnessing looks like for Christians in a world much wider than our parochialism. As disciples, we stand up or walk or march for the values, commitments and people that Jesus teaches us to.

During the height of the Civil Rights era, Dr. Martin Luther King led a march from Selma to Montgomery. One of the people who participated in the march was the Rabbi Abraham Joshua Heschel. After the march, Heschel was asked, “Did you find much time to pray when you were in Selma?” The rabbi responded, “I prayed with my feet.”

I don’t know how all this in our country will work out. What will come of people at our border? And with our environment? Or our constitutional rights and this democracy? I really do not know. But doesn’t there come a point where it becomes a confessional issue? The point at which doing nothing is no longer an issue if I wish to be faithful. I guess I don’t feel I’m being a disciple of Jesus  if I go on about my life as if all this harm isn’t being done… No, if I want to follow Jesus, so I have to raise my voice in opposition, to go out of my way to say “Stop” to all the harm being done.