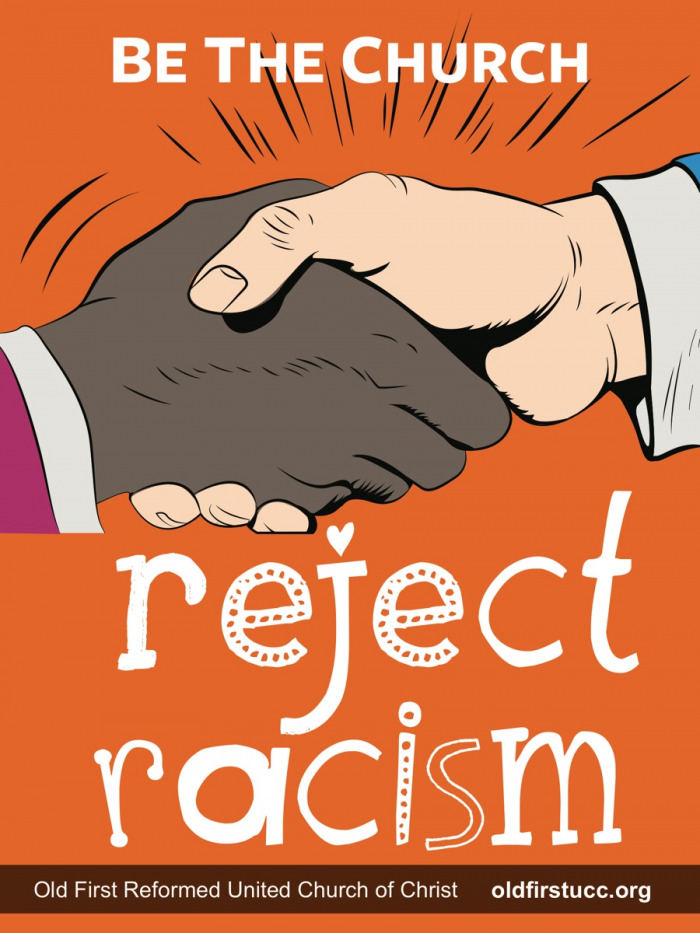 So on Sunday, August 4, we re-purposed the silence with which we begin each worship service. Usually, it’s a moment to stop, center ourselves, and take stock as we prepare to worship. I asked, instead, that it serve as a moment of respectful silence before the loss of life in El Paso and Dayton.

Someone thanked me after worship for finding an appropriate way to memorialize the endless list of victims of gun violence and our nations inability with gun control. Our dedicated silence was that, but in my mind it was also protest, albeit in silence, before the ongoing victims of racism.

Not everything was clear about the two incidents that Sunday so soon after the shootings. But it was clear that the white young man who took the lives of shoppers in the El Paso Walmart had traveled some distance to kill people of Mexican descent. He used the language of invasion and other echoes of the propaganda of white supremacy. The U.S. is as much a victim of the persistent racism in our culture as the guns rampant on our streets. But in both cases certain people suffer more and pay a far greater price.

The 1619 Project is marking the beginning of slavery in North America — 400 years ago this month. That is as hard a date as there is an historically traceable incident wherein the first African slaves were offloaded from a boat to the British colony of Point Comfort, Virginia, in exchange for food. There were clearly Africans enslaved in the Spanish colonies in Florida much earlier. And Native Americans enslaved all along as well. But in light of the British coming to dominate North American colonization and our early adoption of their cultural traditions, the first incidence of British slavery in North America is significant for the institution of American slavery and for our nation’s ongoing development.

The 1619 Project intends to observe the 400th anniversary of the beginning of Anglo-American slavery. It also aims to re-frame our understanding of the country’s history, understanding 1619 as the cultural starting point, this nation’s founding event that places the consequences of slavery and the contributions of black Americans at the very center of the story we tell ourselves about who we are.

Isn’t there something more honest about re-imagining our national history this way? The liberty and self-determination stories / themes of the Independence era and our history afterwards find deeper meaning and greater accuracy when we include their limitation and often being overlooked for certain people in our history.

Old First has been tackling racism for some time too. Hopefully longer than I am going to recount. And also more interpersonally, as we who are members of this faith community seek to recognize the image of God and greet the Christ in each other without regard to race.

But for the last few years some of our leaders have felt it necessary for Old First to try and take on the subject intentionally, systemically, programmatically. We have taken up the UCC’s Sacred Conversation on Race in a few different incarnations. Most recently it has been the Race and Racism Book Group (that will meet again on Sunday, September 8 to discuss The Warmth of Other Suns). We have looked at our nation’s history and our church’s history and our own personal histories. Much has been discussed and shared and learned.

Some have found great meaning in their church wrestling with such issues. Others have expressed less appetite.  Some have been discomforted, frustrated, upset. I think it’s fair to say that a few have left the church over some of what has happened in these conversations. Many more have responded that racism isn’t a topic they welcome at church, where they are seeking some respite from and comfort for  the intractable problems of our world.

But I want to suggest that critiquing  racism is not an optional stance for people who wish to be faithful  in our day and place, particularly with the rise in white supremacist political and terroristic activity. It is rather a confessional issue, one on which the truthfulness of our saying we follow Jesus rests.

We have to ask ourselves: What will our witness be? Mustn’t we do something when violent, racialized events occur with such startling frequency? What are we do as Christians to show another way, Jesus’ way in the face of such dehumanization?

Too often we duck standing up for the honest truth and what’s right. Instead, we settle for a less disruptive, safer silence. Well, safer for us.

When a white officer shot an unarmed Black man while I was a pastor in Brooklyn, I said in the sermon, “In a big city where we arm police to keep some peace, there will always be tragic mistakes. But when those tragic mistakes always take the lives of people of color, there has to be something wrong.” My predominantly Black congregation needed to hear that from the pulpit. My one white police officer got up and walked out, followed by the other 20 or so whites in the congregation.

I was much tamer than the cardinal’s remarks and he had officers in parishes across the city. The people remaining in church paid close attention to a sermon that could occasion a walkout. And the white people dive-bombed me for weeks afterward, suggesting that I had broken racial rank to curry favor with the majority.

Pastors who listen know the political opinions of their congregants. They know exactly who will be upset over any mention of politics or race. And yet there are times when they must speak and upset, even hurt some people’s feelings for the Gospel.

The Gospel is not just some detached, spiritualized plan of salvation, anything beyond which is a worldly or political distraction. Is the word of God really silent on the social ills that plague us all and rob the life of some?

It is not enough for the church to preach doctrines without applying those doctrines to the issues of the day. Today, there are a host of issues clamoring for the attention of the church. Truthfully, it sometimes feels like the issues of the day leave little time for anything else. At the least, Christian people need theological resources to think through these issues.

The Southern Baptists national gathering imploded this year when the Assembly was asked to pass a resolution condemning white supremacy.

POWER, the faith-based organizing group that Old First is a member of, has declared itself as an anti-racist organization that as such, uses the fight against racism as a primary lens for all its work.

These are the two extremes.

Where do we lie? Where will we make a stand? I pray that Old First will continue to offer help with these struggles. And I ask humbly that all who consider themselves Christian take at the very least a moment of silence to ask themselves how racism makes the world less than what God created it for. And how ultimately, it is a denial of the image of God.

When those who come after us look back, what will the church have done? Will we have stood for what is right and true and faithful?

I won’t see you in church this Sunday, but I hope you will go hear Wanda preach,