Renewing a Lost Ministry… "Flowers" for Births and Deaths 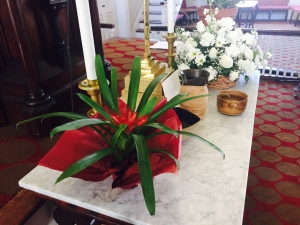 Old First used to have a tradition that when a baby was born, a red rose would be placed on the communion table for worship the next Sunday. And when someone passed away, a white rose would be there.

When Michael arrived — or maybe in transitions prior to that? — the tradition was lost.

It’s easy for that to happen around church, where we always have new leaders and things we only do occassionally. It was already in Michael’s fourth year at Old First, and there was a birth or a death, and finally someone told him about the tradition! The question came to him, “Why don’t you put the rose on the communion table for someone’s birth or death?” He laughed and responded, “Because I have never heard from anyone that that was what we always do!”

He got a flower that time. But he’s not sure if really remembered after that.

When Beth and Andrew had their baby earlier this year, someone reminded him. He got the rose. But that Sunday morning, John O. was out, everything got hectic, and he forgot the rose over in the church office. But there was a rose for baby Leatrice.

When Joey passed away a few weeks ago, someone reminded Michael. He responded, “Maybe we could change the tradition. Instead of a cut flower that won’t last very long, perhaps — because these events aren’t all that often — we could instead buy a simple plant — a houseplant in the cold months, maybe even a perrenial in the warmer months — for the communion table and to send home with family afterwards. Maybe with some care and luck, the plant — as a sign of our care — will last longer.”

We tried a simple plant with Joey’s passing. Michael picked up a Bromelaid on his way into work. Nothing fancy or expensive. But green and orange and alive. After worship, he gave it to Woody, who liked having it, and was careful about noting the care instructions. Woody even told Michael something he never knew: about when Woody used to own a plant store in Center City.

So, let’s keep trying this. The next time might not be until Larry and Rebecca’s child is born in April…

If we really want to make this a tradition, is there someone who would be willing to make this their ministry? It’s occassional. And not too hard. But if Michael has someone to work with, it’s much more likely to get done regularly.

It’s a simple as promising to purchase a simple plant (to be reimbursed by the church) when Michael or Teresa call to let you know someone is born or dies… and then getting the plant to the communion table the next Sunday. If you are interested in taking this on, please speak with Michael.