Replacing the Mannequins in the Creche — Community Art Project on Sat., Dec. 7 @ 1 pm 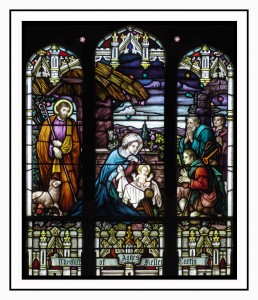 Each year, the Creche is constructed in the front parking lot the weekend after Thanksgiving. And the animals arrive shortly thereafter.

And about that same time, we place mannequins in the creche representing the human characters in the holy story– Mary and Joseph, the shepherds and the Wise Ones — all waiting with the live, barnyard animals on the arrival of baby Jesus on Christmas Eve.

The Creche as originally created by Francis of Assisi was intended to be a teaching tool– bringing the advent of the Christ child to cities, towns and villages, making it real in a flesh and blood incarnational way and easier picturing the holy drama of Christ’s birth.

On Christmas Eve, we use real people — and a real baby — alongside the animals to be the flesh and blood world into which God sent the Son.

But for the weeks before, when we have hundreds of people visiting the Creche in our front parking lot, Old First has had mannequins stand in for those characters.

But our mannequins have seen better days, having served for who knows how many years? They are just old and a bit too beat up. Wigs, beards and limbs fall off! Some fingers and one nose are missing.

And their stands aren’t as sturdy as before. The animals pull at their clothes, and sometimes disrobe the characters. Or just knock them over. To see Mary face down in the straw, in disarray, or one of the shepherd’s arms lying a few feet from where he stands– it’s just not helping to tell the story.

We’ve been trying to figure out a solution. And we think we figured it out…

The figures of the homeless painted in the social hall are our inspiration. They were originally a Lenten art installation in the courtyard– in the form of a cross. Since then, they’ve graced our social hall and reminded us of the dignity and images of God found in our homeless guests and neighbors.

What if we created the cast of human Creche characters in two-dimensions on big sheets of 3/4 inch plywood?

~ Mary and Joseph on bended knee before the manger — in the back corner of the corral reserved for the human characters.

~ Two or three shepherds, maybe with a lamb at their feet, standing off a bit, perhaps right at the entry where the gate is.

~ The three Kings, gifts in hand, standing tall and ready to make their offering, with their backs against the gangway by which the animals make their way back to shelter and rest behind the humans.

The two dimensional “cut-outs” could all be simply fastened to the sides of the Creche, and if the animals pushed against them, they’d do no harm. They’d last if we store them well. There’d be no clothes to mess with and wigs and beards to get messed up.

Michael was speaking with Liz Afif Fisher, a local artist and gallery owner who worships with us. She loved the idea, and offered to help us create the images. Designing them on the plywood and leading people from our community in the painting.

But Liz is also expecting a baby, and what with all that, it was beginning to be questionable if she could help as she had hoped. So she has reached out to a colleague, Christina Doe. The photo of the doorway with the blue flower is part of a mural that Christina has completed and was featured in the Inquirer. Michael has spoken to her, and here is where we are in planning:

The cast of Creche characters will be designed and rendered life sized in a simple stained glass style on plywood cut-outs. Christina will get them sketched on the plywood. We’ll get them cut out and primed.

On, Saturday, Dec. 7 from about 1 p.m. in the afternoon, a group of us will help Christina to paint the figures in the social hall. We are looking for a work party of about 15 people. No artistic experience or gifts required, but they would be welcomed! Kids are welcome if they can follow instructions and paint carefully.

Please let Mindy know if you will be coming– you may do so by contacting the church office or indicating so on the Friendship pads in worship.

(We may be also be working on making luminaries that day — if we can get enough of the tin cans we need.)

We believe we can get all the figures painted that one afternoon. We will consecrate the new figures and thank Christina in worship on Dec. 8.

The figures will need to be preserved with polyurethane and allowed to cure before being installed in the Creche. But for this season, we’ll have a whole new, artistic cast of characters that we helped to create.

An angel is making a special gift to Old First to cover the cost of this project.