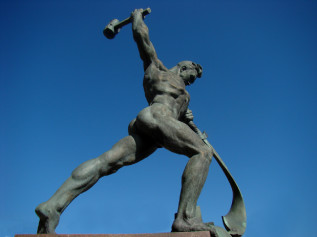 Old First has a controversial issues policy that asks the whole church to approve  any justice position the church takes that there could be significant disagreement over.

Old  First has been asked to serve as an  assembly location, providing outdoor space,  electricity and bathrooms for a “Demand the Ban“ march / demonstration on Wednesday, May 16 that will end up at Senator Toomey‘s office at the Custom House at 2nd / Chestnut.

“Demand the Ban“ is the call for a nationwide ban on rapid-firing, semi-automatic assault weapons.  The “Demand the Ban“ Direct Action is being sponsored by: CHARLES Foundation; Delaware County United for Sensible Gun Policy; Heeding God’s Call to End Gun Violence; Raw Tools; and The Simple Way.

Since the Senator has refused to meet with “Demand the Ban“ leaders to discuss a ban on assault weapons, this demonstration will mobilize people from Pennsylvania and throughout the United States to bring the “Demand the Ban“ to Senator Toomey.

The protesters will gather in our courtyard for speeches and instructions, from 10 am to 10:45 when they will leave on the march. The organizers are working with the police department on the action, as they are expecting hundreds of people, up to a thousand, and streets will need to be closed. They are also planning civil disobedience at the Senator’s office.

At Old First, an assault weapon will be melted down as a symbol of “beating swords into ploughshares“  (Isaiah 2:4, Joel 3:10, Amos 4:3), and the garden tool will be presented at Toomey‘s office.

Finally, the marchers will display t-shirts with the names of victims from the last 5 mass shootings.

The congregation approved this use of our property as part of the “Demand the Ban“ demonstration.