Results of Conversation Circles on Worship Space & Next Steps 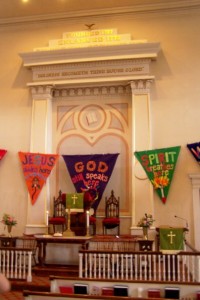 On Sunday, January 29th, we heard from many of you during the Adult Forum regarding the current use of our sanctuary space. Here is what those of you who joined us shared.

There was an over whelming positive response to the temporary removal of the front side pews. All shared felt that this should remain a permanent change to our space.

The Worship SLG is going to have this decision on its agenda for its next meeting, Sunday, February 19. If you have input for that suggestion, please speak to Wanda or another member of the SLG. Or join us for the meeting in the pastor’s office after worship: all of our meetings are open.

The idea of removing several of the pews in the back of the church to allow for more freedom of movement also received positive assent, with the cautious note that we make sure to keep this space, as well as the new space in front of the church, free of clutter. The suggestion of building much needed storage facilities in the back was also made. Since that first conversation, another suggestion has been added — that space there might be right for parents with small children: we could have rocking chairs and some quiet infant and toddlers’ toys.

The Worship SLG will begin discussing these potential changes at its next meeting too. Again, people with input for those deliberations are encouraged to share it as soon as possible. Again, everyone is welcome at our meeting. The Worship SLG is committed to provide as much information, prompt as much discussion and broad-based involvement in their decision-making process and inform the whole church prior to making any final decisions.

Participants in both conversation circles also contemplated how the chancel space at the front of the church could be utilized differently.

Another idea that got occasioned some discussion was the idea of also removing the higher raised platform (where the pulpit now stands). In this latter possibility, people imagined a single, lower platform, perhaps two steps up, and perhaps a little larger than the floor space taken up by the current chancel.

The central role of our current communion table was also offered as a guide to any modifications proposed to the front of the church. Included in this reflection was the important role of baptism in our worship and how this might also be highlighted in a more visible way.

Both circle groups reminded us of the need to improve the current sound system, the lighting, and painting of the walls as well as repair the windows.

Both conversation circles noted that before any changes to the chancel were decided on, or even discussed much further, it would be helpful to have some floor plans or even drawings of what the changes might look like. The Worship SLG agrees with that suggestion, and is seeking such images. It also will follow its stated process of informing the congregation of when it is taking us such discussions as well as when it will make a decision, what changes are being considered and inviting as much participation in the planning process as possible.

Alice Reyes
On behalf of the Standing Leadership Group for Worship