Artist Karen Brooks hopes Old First’s flock of small plastic doves cut out from recycled milk cartons and decorated with colorful beads, ribbons, and bits of metal will stop or at least slow the flood of violence in Philadelphia, particularly gun violence. By the end of 2013, one dove will fly from the towering oak tree in the courtyard every time a Philadelphian is felled in an act of violence. They will remain in place throughout 2014 as a memorial. Most carry the name and age of each victim at the time of their death, 221 so far in 2013.

The  dove memorial grew out of our congregation’s collective grief over the massacre of 20 elementary school children and six adults one year ago at Sandy Hook Elementary in Newtown, Connecticut.

“We felt that as a faith community we wanted to add our voices to those saying gun violence must come to an end,” Brooks said. “Our church has a prominent location from which to bear witness to the community of our commitment to build a more peaceful life for all our citizens. We don’t want one single life forgotten.”

The Rev. Michael Caine said it didn’t surprise him his congregation eagerly embraced Brooks’ project. So far 40 members of the congregations have helped in some way from collecting and cleaning the milk cartons, to cutting out the six-inch dove bodies and wings and adding the wire hangers and stringing on the beads.

“We are a progressive church community and so for us, the unwillingness of our country to put reasonable controls on gun ownership and gun usage is hard to fathom,” Rev. Caine said.

“But as we talked about our reaction to the tragedy in Sandy Hook and how we could respond, we realized that most of us didn’t really have any sense of number of violent homicides right in our own city. And even when you hear a number – 331 in 2012 — because these deaths happen mostly one at a time, it is easy to overlook what that many deaths by guns really means.”

Janice Smith helped Brooks come up with a simple three dimensional design. She said she likes the hands-on nature of the dove memorial. “And I especially like the idea that the dove is the universal symbol of peace,” Smith said.

And for Elizabeth Ortiz, who joined one of Brooks’ dove making workshops, the project carries double meaning because she lost her twin brother four years ago and her father earlier this year, lives cut short by illnesses.

“When I am cutting out the doves, I think about my own losses,” Ortiz said, as she twisted wire with a pair of pliers to make a simple hanger. “I know what the families of those who died are going through and this helps me connect with them spiritually.”

While Brooks is committed to organizing this Old First mission project, she also recognizes the inherent tension is making something fanciful out of violent death.”

“The doves are pretty up there floating in the breeze above the churchyard,” Brooks said.  “That is until you realize each dove represents a person who is no longer with us just since last January and then sadness washes over me. What I am hoping is that folks passing by will stop for a moment, ponder what each dove represents and take that with them as they continue on with their lives. By bearing witness and raising our voices to these violent deaths, we will all realize we each can be a force for change. I want this project to raise the question of how we as people of faith, could be informed by a different vision of the world, where love and compassion can be agents of change, where justice can underlie all efforts for peace.”

[Editor’s note: A version of this article has been submitted for publication to the Philadelphia Inquirer and the UCC national communications office. No word yet from either on whether it will be published.] 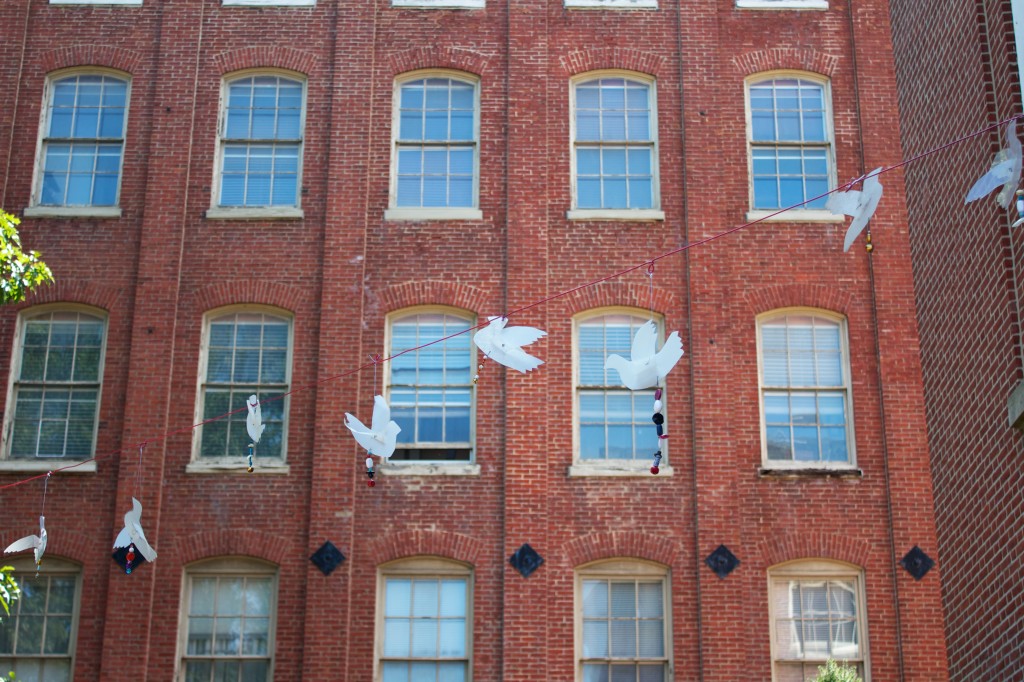 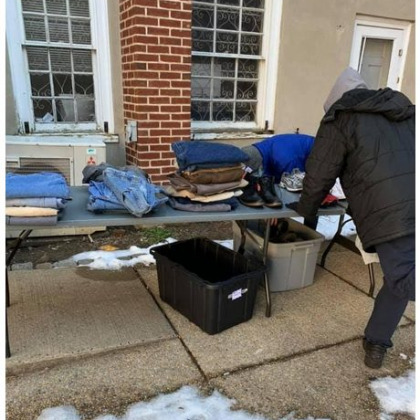