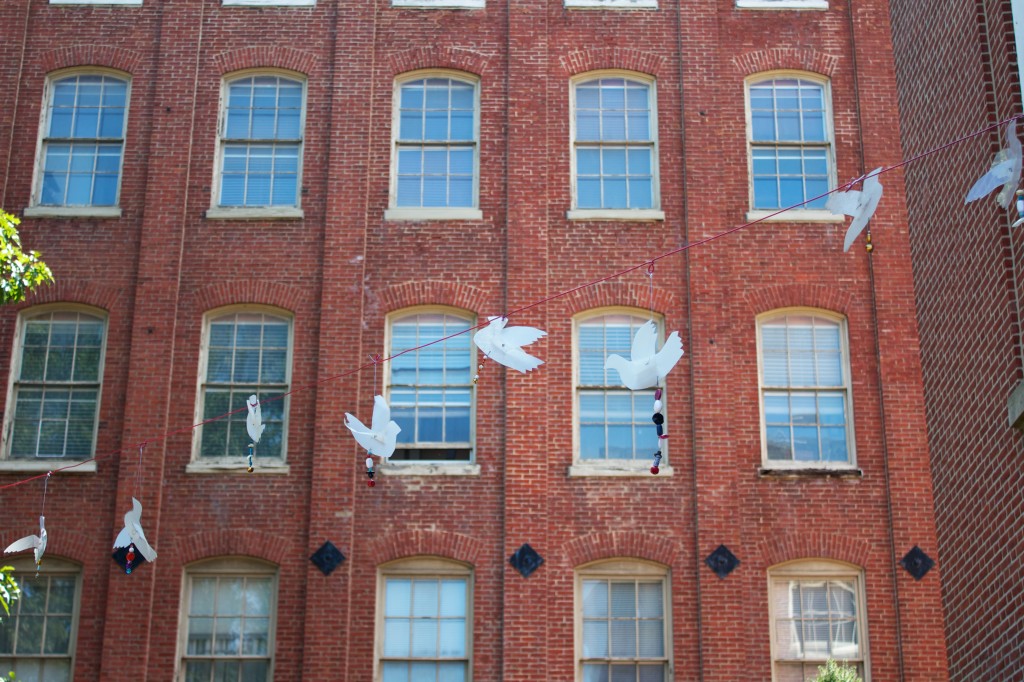 A coalition of 5 groups, headed by Heeding God’s Call, a well-known Philly group advocating gun control, is planning a May 16 protest “Demand the Ban” in front of Senator Toomey’s office at the Custom House at the corner of 3rd and Walnut, encouraging the Senator to support a national ban on assault weapons.
The coalition has asked if Old First’s courtyard could be the gathering point for that day of protest — offering them space and time to gather and orient a crowd. And also to kick-off their protest with a pointed “action” before the march to the Senator’s office, protesting and planned civil disobedience. But more about that in a minute.
Michael is supportive of this usage of our property as it seems well within our mission statement, our general understandings and past commitments, for example the Dove Project from a few years ago when we commemorated every gun death in the city of Philadelphia by flying a dove for each life lost.
The Elders also were supportive, feeling it was an opportunity for our church to use our faith to build on the groundswell organized by young people in the March for Our Lives — for some effective gun control after the mass shooting at Stoneman High School in Florida
But Old First has a policy about our church taking public stands that could be controversial. Our policy requires the whole congregation has a chance to weigh in so we decide such issues together. To this end, the Elders have called a Special Meeting of the Congregation immediately after worship on Sunday, April 15 to vote whether or not we should serve as hosts for the kick-off of “Demand the Ban.” Towards the same end, the Elders have asked that people with concerns might talk to the pastor or share them with Elders prior to the meeting, so that leadership can be as informed as possible for the meeting on the 15th.
This protest was previously scheduled for March 21, but that date got scratched because of weather. Heeding God’s Call was founded out of the Arch Street Meeting, as it sees itself as a peace group. Arch Street Meeting can’t host them on May 16, and they’ve asked if we might be able to.
Here’s the plan for that day. People will gather at Old First outside in the front courtyard from 10 am until about 10:45 at which time the
whole crowd will begin to move to the Custom House. It is just a location and a time to gather. And some speeches of course to frame the
event. They have their own sound system, but would need our power. Our sanctuary building will need to be open for bathrooms during that time.
They will be working with the Police. They are estimating that they might have between a couple hundred and a thousand people, which would require Race Street to be closed for overflow.
Also here in our courtyard, they would be melting down an assault rifle and making it into a garden tool. They use a portable forge. And it is done by a professional group that goes around the country melting down weapons.
Finally, there will be t-shirts carried on crosses with named t-shirts for the people killed in the last 5 mass shootings. The congregation will be asked to vote whether or not the church should use its space for this purpose, and in so doing, show some support for banning assault weapons.